In the opening commentary of the Winter 2022 issue of Buddhadharma, Lama Karma Chötso shares her experience as one of seven clergy in Miami-Dade County who filed lawsuits seeking to invalidate House Bill 5. 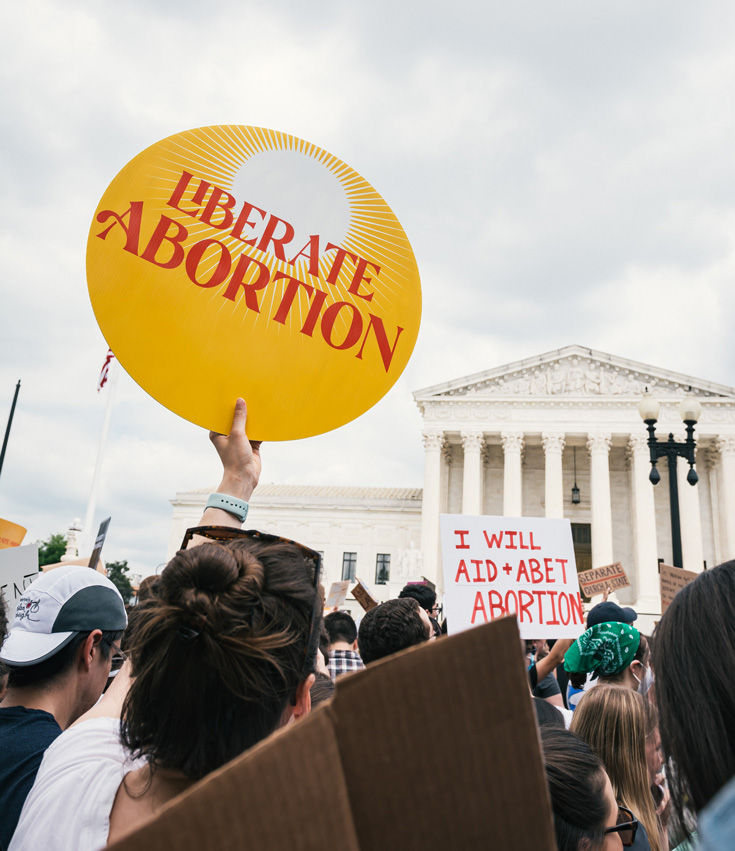 Protestors gathered at the Supreme Court building in Washington, DC after the court’s overturning of Roe v. Wade. Photo by Gayatri Malhotra.

In July 2022, seven clergy of various faiths in Miami-Dade County filed lawsuits against the State of Florida seeking to invalidate House Bill 5 (HB 5), the Reducing Fetal and Infant Mortality Act. HB 5 prevents women and girls from having autonomy over their own bodies; has no exceptions for rape, incest, or the age of the victim; no exceptions for life-threatening medical emergencies; and no exceptions for incurable fetal abnormalities.

I was one of the seven.

Can our lawsuit be considered bodhisattva activity? If motivation counts, then yes. Can we as Buddhists dispassionately examine this issue, asking ourselves and our teachers difficult questions? Can we dialogue with those who disagree with us? And whatever perspective we adopt regarding abortion, can we offer spiritual support and understanding to women and girls who choose it?

This situation cries out for compassion, for empathy, and for protection of women and girls.

Laws like HB 5 are enacted when abortion is perceived to be inherently and morally wrong. But this law does more than restrict women’s right to choose. As it stands, and as the aiding and abetting law in Florida stands, it also infringes on freedom of speech and freedom to practice the religion of one’s choice in the State of Florida.

Under HB 5, for clergy, according to their faith tradition, to counsel “women, girls, and families to obtain an abortion beyond the narrow bounds of HB 5…aids and abets the crime. Under Florida’s aiding and abetting law, they (clergy­) commit the crime itself by counseling in favor of it.”

Therefore, if a woman or girl who is in danger of losing her life due to an existing pregnancy requests spiritual guidance, I cannot say to her, for example, that abortion (as explained by my teachers) will not net her overwhelming negative karma. We cannot explore that question. I can only recite the law with no consideration for her psychological or physical state, her financial situation, or her family—in other words, the present manifestations of her karma. While societal laws are necessary for a relatively peaceful existence, an individual’s karma cannot be legislated, nor does one want to make profound life decisions without guidance.

In my forty years of practicing Tibetan Mahayana Buddhism, I’ve tried to benefit beings solely through meditation, prayer, teaching, and building stupas. While that continues to be my preferred approach, protesting laws that have historically caused irreparable harm to others—whether by discriminating due to gender, race, age, or sexual orientation—is an additional skillful means to benefit beings.

Discussions of abortion are often couched in language that projects negative attitudes onto the pregnant women and excludes the men involved. The narrative portrays abortion as a morally wrong act committed by a woman or girl who is thoughtless, selfish, and uncaring, no matter what her circumstances. This narrative is promoted by forced-birth advocates, but I can personally attest to its untruth.

In my twenties, my birth control didn’t work, and I got pregnant. I was prepared to give birth followed by adoption; however, due to a spinal injury from an earlier car accident, doctors suggested I have an abortion because carrying to term could result in my partial paralysis. Still, the decision to abort was not easy, the procedure itself was painful, and even with the support of my boyfriend, his family, and caring friends, many tearful nights followed.

My heart goes out to women and girls who, without comprehensive medical care, now endanger their lives if and when they become pregnant. The situation cries out for compassion, for empathy, and for protection of women and girls rather than their exclusion from full medical care and basic human rights.

If we’re going to follow in the footsteps of Buddha Shakyamuni—who became so intensely aware of others’ suffering that he chose to leave everything behind to find a solution to it—then we can use our clarity and understanding to create myriad ways to prevent harm from coming to others. This lawsuit is just one.

Lama Karma Chötso has studied and practiced Tibetan Buddhism for forty years, including completing a three-year retreat, studying Tibetan language in India and Nepal, and touring Tibet with Khenpo Tsultrim Gyatso Rinpoche. She is based in Miami, where she founded Open Awareness Buddhist Center twenty-five years ago, and also teaches in Peru, where she and her students have built a Tibetan stupa in the Amazon Basin.