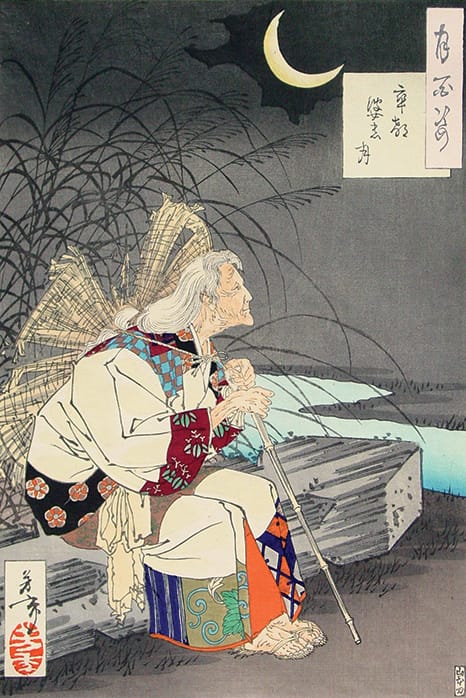 Ono no Komachi as an old woman, woodcut by Tsukioka Yoshitoshi

How do we remember a woman’s life? Can we piece her together from a few lines of poetry?

If a stream would ask me

This is a poem by Ono no Komachi, one of Japan’s best-loved poets. Little is known of her life. She lived from about 825 to 900 CE, although these dates are uncertain, as are her parentage and birthplace. It seems she served in the Heian court, possibly as a minor consort or lady-in-waiting. Named as one of the Six Poetic Geniuses of the Heian period, as well as one of the Thirty-six Poetry Immortals, she was renowned for both her poetry and her astonishing beauty. Although she died over a thousand years ago, her name, Komachi, is still a synonym for female beauty in Japan.

I wear my bed clothes

dark as the night’s rough husk.

keep coming back to my shore.

there’s no harvest for him

in this uncaring bay?

Apart from this single poem, there is no evidence of heartlessness at all. Rather, most of her poems portray her as the one who is left pining.

I cannot keep myself

for the handsome moon.

Ono no Komachi is also famous for her old age, spent in obscurity as a destitute and somewhat lunatic crone, living outside the capital. Karmic retribution for her youthful heartlessness? Perhaps, but her poems suggest a profound understanding of impermanence and samsara.

yet living here is easier

the worries of the world.

How do we remember a woman’s life?

Poetry translations by Jane Hirshfield with Mariko Aratani from “The Ink Dark Moon: Love Poems by Ono no Komachi and Izumi Shikibu.”