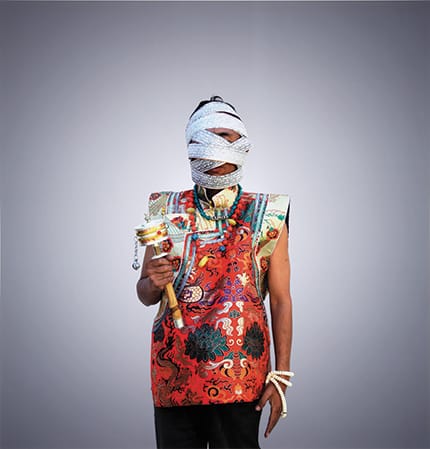 Years ago, I was traveling in the Bhutanese Himalayas as a guest on an expedition to pick out Buddhist monastic treasures for an American museum show. Crossing a breathlessly high pass on a mud road that sent our jeep tires skittering, we stopped at a farmhouse to ask directions. Our government-appointed hostess, a delicate young woman, came over to ask a logistical question. A fold of her long robe slipped, and I saw what she kept hidden at her throat: a button of pop star Madonna.

In Bhutan, the government tries to hold back the tsunami of Western consumer culture with laws mandating traditional dress, but outward compliance is often met with secret rebellion. Tibet, by contrast, has suffered six decades of rule under China’s Communist regime, and the cultural collisions have been disastrous. Refugees who escaped over the snow peaks at risk of ambush and extortion have been thrown back on their survival skills in a Western world obsessed with the personal self. Those who stayed in Tibet have suffered much oppression, giving rise to a wave of self-immolations—more than 120 in the last three years—that has convulsed the world’s conscience.

How can Tibetans speak out? Anonymous: Contemporary Tibetan Art, one of the first museum exhibitions on this topic, is offering twenty-seven of them a voice. The Tibetan artists come from Lhasa, Nashville, Thimpu, Zurich, Oakland, New York, India, Nepal, and the Australian outback. They enter an internationalized art world increasingly concerned with the thoughts of the colonized; Dakar, Beijing, Singapore, Bangladesh, and East Africa all have their own biennial exhibitions. Anonymous gives living Tibetan artists a place in the sun, essentially for the first time.

Traditional Buddhist art visualizes sources of refuge and has long been defined by intricate rules of color, proportion, ornament, and gesture. If refuge is a spiritual haven, refugee status is a flux condition colored by darkness, confusion, and sorrow. These fracture lines crackle through the exhibition, separating artists living in repressive environments from those who are prospering—or at least holding their own—in the diaspora.

Exhibition curator Rachel Perera Weingeist observes how traditional Tibetan religious art celebrated “a collective, spiritual impulse.” Artist-monks wielding brushes in the monastery workshops would never have signed whatever thangka they were working on; the idea would be preposterous. But for the twenty-seven artists in this show, which originated at the Samuel Dorsky Museum of Art and is traveling to other locations, anonymity carries a different weight; it recalls how Tibetans have been deliberately silenced in the twenty-first century. Weingeist at first thought she would play with this theme by making everyone in the exhibition anonymous, but Western-oriented artists vehemently opposed the idea. Even so, some artists need to mask their names because they risk punishment for speaking out.

Weingeist sent out a call for video submissions via worldwide Buddhist networks and a new website created for the exhibition. As YouTube users know, videos can be effective instruments for bearing witness. Artists living outside Tibet responded quickly, but artists inside Tibet at first sent nothing. Investigating this mystery, Weingeist discovered that digital media can’t be mailed from Lhasa under Chinese post office rules, and digital transfer on the Internet was mostly impossible because of slow upload speeds. Videos ultimately had to be carried to the West in Tibetan hands and pockets. The ones that survived the crossing are unusually urgent and not to be overlooked.

In the video Lhasa Wind, a backyard laundry line holds clothes flapping in the pulse of air flowing from the mountains—you feel the cold, the precariousness, the physicality of a place—until they fall to the ground. In Bharkhor, a handheld camera records a walk through the streets surrounding the Jokhang Temple, the center of Lhasa. Moms and children, merchants in their stalls, Chinese soldiers lounging on a distant street corner—you see it all, unfiltered, for twenty long minutes—then a group of Chinese soldiers comes closer, and one of them looks directly at the filmmaker. The jolt is electric. What happens next? Another video, Footprints, suggests the fear: for an hour and forty minutes, a man whose face is never seen walks around and around a table in a small room that resembles a cell. He leaves red footprints on the floor. Exhaustion finally topples him.

Weingeist is senior advisor to the Shelley and Donald Rubin Private Collection, the source of most of the nonvideo work in Anonymous. The Rubins are the founders of the Rubin Museum of Art, a non-profit cultural institution that has become a nerve center of Manhattan intellectual and spiritual savvy through its programs and exhibitions (which are mainly but not exclusively focused on traditional Himalayan Buddhist art). After getting the museum up and running a decade ago, the Rubins began privately collecting contemporary art from Tibet and from artists of the Tibetan diaspora. The painters, installation artists, and sculptors in the private collection prefer to use their names, and most can claim established Western art identities.

Who’s Buddhist, who’s not, and who’s no longer sure? Every artist in Anonymous answers the question differently. It’s painful to endure the video of a young Tibetan man in a Chinese-restaurant kitchen slicing scripture pages into “noodles” and stir-frying them in a wok with vegetables, then eating his combo for lunch. Is this the only nutrition he gets from his country’s ancient practices? Or is he consuming cynicism du jour?

Tulku Jamyang, a world-traveling reincarnate lama, has devised an art-making method that enlists both his monastic training and his intention to use emptiness (shunyata) as a tool for transformation. He stretches white rice paper over bristol board painted in red scripture text. With the intense focus of a skilled meditator, he pierces the rice paper with the burning tips of lighted incense. The “empty” holes in the paper do the work of drawing. With this method he constructs the head of Buddha and a sequence of his own self-portraits, bringing form semi-miraculously out of white void. He also has his own triptych of three self-portraits inked with the language of prayer.

A video, Matchsticks, is a haunting reminder of the feeling qualities of the Buddhist path. In total darkness, a hand strikes a match. The brief flicker of flame reveals the faintest glimpse of a ritual dorje glowing gold in the middle of the film frame. The match goes out, blackness descends, the hand strikes a match, the dorje gleams fleetingly and is lost in blackness—again and again this is repeated, always hoping to see, always trying, always just missing.

The artist Nortse—who lives in Lhasa, studied art in China, and exhibits around the world—set up a row of six claret-red monk’s robes in a highly charged installation he called Zen Meditation. The title must have amused him, because the iconography is totally Tibetan. Each of the robes has its own black-metal frame, a butter lamp, Chinese money, and Tibetan Buddhist scriptures—and underneath each square is beach sand, which provides the interpretive clue. Everything here is on shifting sand. The meditators have disappeared from inside the monk’s robes—maybe they vanished into rigpa, into clear light—and crystals of sand in the cloth fibers suggest they’re long gone. Who or what is leaving? Is Tibetan Buddhism disappearing from the planet? Or were the monks just too good at practicing “Zen emptiness”?

Nearby, Nortse presents a set of Chromogenic photos of himself, his torso and head wrapped in several kinds of bandages, colorful testaments of Tibetan suffering. He’s also made twelve cans of “consecrated yellow hulless barley”—sacred tsampa—and the photos on the can labels repeat the parade of anonymous heads swathed in red and white gauze. As Nortse’s self-portraits suggest, to be a Tibetan now is to experience violence of many kinds.

Violence gets its portrait drawn and redrawn throughout Anonymous. The exhibition title itself suggests how much suppression Tibetans must endure. The monks, nuns, and civilians who have turned themselves into human torches have elevated the already high anxiety index in this exhibition. Some artists have responded in surprising ways.

Kesang Lamdark, whose unusual medium is melted plastic, applied this moldable modern throwaway material onto two Tibetan fabric vests, fusing it into an epidermis-like layer. The vests—one in glossy orange, one in brilliant purple—mimic fire-seared skin so effectively you can’t help but shudder. Lamdark has also become the exhibition’s poster child for two dramatic, frequently reproduced wall-tall “paintings” of acrylic pigments thickly spread on wire grids and plastic. On one, the protector deity Dorje Drakkten sticks his red tongue out; on the other, the campy Kiss singer Gene Simmons sticks his red tongue out. Dorje Drakkten is better known for speaking through the Nechung Oracle to the Dalai Lama, making prophetic revelations that Tibetans need to hear. Kiss is channeling something that Westerners need or want to hear, or so Lamdark seems to feel—something about self-dramatizing, perhaps.

Tibetan artists flaunt their familiarity with Western consumer culture—most likely because they can and feel they should. Familiar Buddhist images are thrown into the cookie jar along with pop-culture icons: Shrek, modern machine civilization, the comic-book look, even a spoof by Dedron of the eminently spoofable Mona Lisa aglow in a Tibetan Pure Land.

The artist Gade envisions Mahakala sprouting a gas mask, with hammer and sickle, grenade, guns and knives, the head of Shrek as a topknot, and garlands of Micky Mouse-head skulls. Maybe wrathful deities speak to the sense of wreckage that Tibetans experience when they step into the chaos outside the monastery doors.

How to explain Tibetan artists’ fascination with Shrek? Perhaps you have to be on the far side of Shangri-la. On the near side, Shrek looks less like an everyman than a product of corporate film factories whirring out consumables within a colossal Hollywood moneymaking machine. But why shouldn’t Tibetans in the diaspora be eagerly queuing for movie tickets, just as Westerners are excited about discovering Tibetan Buddhism? Each side is just getting to know the other. It’s a long story, and we’re only on page one.

For more information on this exhibition and where it’s traveling, go to contemporarytibetanart.org.