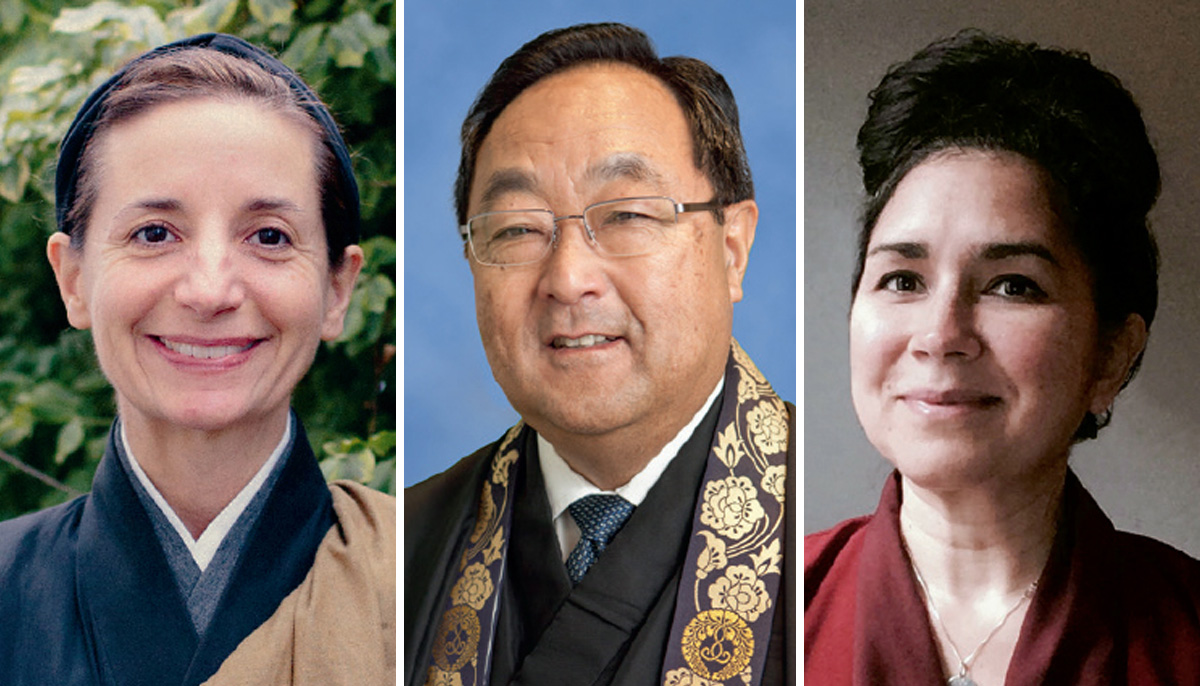 Question: Mostly, when I see secular expressions of Buddhism like mindfulness practices, I’m glad—it’s beneficial, even if it isn’t labeled “Buddhism.” But at what point is it not Buddhism anymore? Is there one aspect of the teachings or practice that has to be there, no matter what?

Myozen Joan Amaral: Yesterday, my friend Ivana and I were celebrating Central American Independence Day. Among many other things, she is Honduran, and spiritual, and actually also latently religious. She has just begun sitting zazen with the sangha, after many years of meditating through her own yoga practice. She didn’t call her meditation practice “Buddhism,” so it’s been interesting to see her turn to “Buddhist” practice now. As we enjoyed pupusas and some delicious passionfruit juice, I asked her, “What do you think makes Buddhism, Buddhism?” Without hesitation, she replied, “Buddha.” Boom. Done. Hecho y satisfecho. Beginners mind—without pretense, without that kind of tribalism that can creep in after years of practice.

How do I uphold something specific without falling into dogma or fundamentalism?

After founding a sangha and leading it for ten years, I notice that this is where I go: back to the basics, back to the beginners. Every time someone new comes into a class or joins our practice of chanting and bowing, it’s an opportunity to see what we’re doing with fresh eyes and a fresh mind. Mente fresquita. What are we doing? This is a very good question to return to every now and then, especially as the decades pass.

The next question might be, who or what is Buddha? For some of us, we do in fact identify with the guy on the altar—not as someone to worship, but as an example of someone who broke through his own self-doubt after years of patient struggle with his conditioning. We stay close to the teachings that have emanated from his experience, expressed through the peaceful expression on his face and his relaxed shoulders that we see in those statues. We’re reminded both of how we can be and how it actually is.

For some of us, though, “buddha” might be more like Dogen’s “earth, grass, trees, walls, tiles, and pebbles”—all existing in ever-unfolding awakening, not limited to the human realm, and certainly not limited to just those who “practice.” This perspective also helps us avoid creating more layers of othering; we can continue to be Christians or Muslims or Jews or atheists even as we meaningfully engage with Buddhist teachings.

My koan as a dharma teacher and sangha leader since leaving the monastery has been this: how do I uphold something specific (Soto Zen, in my case) without falling into dogma or fundamentalism? What I’ve come to, with the assistance of Ivana and countless others, is that maybe I can trust the flow of reality, and the flow of beings in and out—of me, my life, my sangha, this world—and in so doing, trust the ongoing flowering of Buddhism without getting too hung up on the “ism” part. Maybe all of us who hold dear the buddhadharma can trust our process, what Dogen calls “practice–realization,” as also part of the flow of this tradition, enough to imagine ourselves less as gatekeepers of Buddhism, and more as doulas of the dharma, full of courage and confidence, calmly welcoming ourselves and each other home.

Marvin Harada: Personally, it doesn’t bother me that things like mindfulness are being adopted into the mainstream without it being taught as Buddhism. I just think it is wonderful that aspects of Buddhism such as mindfulness and compassion are being discussed and embraced in the broader culture.

I know that mindfulness, for example, is being taught in schools now, to help students learn how to focus. Obviously, mindfulness can’t be framed as Buddhism in a public school, but I think it is tremendous that it is being taught.

Of course, the opposite occurs too, when Buddhist terms come into our culture with perhaps the wrong meaning. I remember years ago, I went to a fancy bar in San Francisco, and they served a drink called the “Banana Nirvana.” There is also a golf ball called “Karma.” (Karma never seemed to help me in my golf game, but golf does teach you that you have to accept the effects of your own golf shots, good or bad.)

I think we might say that some element of the three treasures must be present for something to really be Buddhism.

In time, as Buddhism grows in this culture, people will come to realize that their practice of mindfulness was really Buddhism all along. I hope that realization leads to an encounter and study of Buddhism, much in the way that meditation led to the study of Buddhism for Dan Harris, the author of 10% Happier. I think we could find that people will initially be interested in Buddhism at the practical level: will Buddhism help to ease my stress and anxiety? Will it help me to live a more meaningful life? I think that we all start from this practical level of Buddhism, but we should not stop there. From that level, we must continue on the path to the “truth level” of Buddhism from which all of our great masters and teachers have written and spoken.

In general, I think we might say that some element of the three treasures must be present for something to really be Buddhism. However, as I have learned from the late Thich Nhat Hanh in his writings, the three treasures cannot exist without each other. There is no Buddha without the dharma and the sangha; there is no dharma without the Buddha and sangha; and there is no sangha without the presence of the Buddha and the dharma. For one to exist, all must be present. If they are, then Buddhism is there.

Pema Khandro: One of my brilliant professors in graduate school said about the early history of Buddhism, “Buddhists are people who argue about what makes you a Buddhist.” So perhaps this exercise of thinking through questions of what is and is not Buddhist is a vital part of being a Buddhist. Personally, I believe that since Buddhism is diverse, identifying oneself as a Buddhist is what makes someone a Buddhist; otherwise, it would be decided on biased parameters that some Buddhist group in history probably contested. So what has to “be there no matter what” is the identity.

There is a danger when stripping things down into a “secular” version that one is partaking in a legacy of neocolonialism.

However, when it comes to practices, it’s a different story. Buddhist practices have histories, origins, locations in times and places, so I believe that whether mindfulness identifies itself as Buddhist or not, it is derived from Buddhism and uses Buddhist language and techniques, which to me means it was at some point Buddhist and disregarded that identity for complicated reasons. I don’t believe something needs to be there “no matter what” to make it Buddhist, because even if one were to say, “Oh, Buddhism must have the idea of emptiness, or it is not Buddhist,” well, even the idea of emptiness is defined in radically contradictory ways by different Buddhist philosophical traditions. Buddhism is such a diverse tradition that imposing a vision of a monoculture, or imagining a shared belief or practice among all Buddhists, would be ahistorical and unkind.

Part of my view as a Buddhist is that to some extent, things gain their meaning from contexts; the objects we perceive are perceived in ways that intertwine with our identities and interpretations. So when I consider mindfulness, I don’t necessarily think it ever became entirely non-Buddhist in all its manifestations, despite efforts to disassociate it from so-called “religious” roots. But that is probably because I am seeing from the perspective of a Buddhist. I imagine that if a non-Buddhist encountered it, they could encounter it in a non-Buddhist way. At the same time, things are not just what we interpret them as, they have their own histories.

Maybe the question should be inverted: what would need to not be there for it to not be Buddhist? When Buddhist practices are presented as secular, I feel welcoming to those adaptations as important instruments of humanity trying to understand itself and work with fundamentals like self-regulation, calm, attention, and focus. On the other hand, a legacy of violent, evil colonialism has absolutely defined how we understand meditation and Buddhism in the global context. It is hard not to notice this as an indigenous person myself. There is a danger when stripping things down into a “secular” version that one is partaking in a legacy of neocolonialism. I hope that mindfulness practices and other efforts to secularize and universalize Buddhist practices could be updated and re-presented so that indigenous cultures, customs, lineages, and traditions from which Buddhism has arisen are respected, acknowledged, and benefit financially from its success.

Pema Khandro is a teacher and scholar of Buddhist philosophy, as well as a lineage holder in the Nyingma and Kagyu traditions of Tibetan Buddhism. She founded the nonprofit organization Ngakpa International and its three projects, the Buddhist Studies Institute, Dakini Mountain, and the Yogic Medicine Institute. She is completing a doctorate specializing in Tibetan Buddhism at the University of Virginia.