Bryant Terry is a chef, educator, and author renowned for his activism to create a healthy, just, and sustainable food system. Bryant’s fourth book, Afro Vegan was published by Ten Speed Press/Random House April 2014. Just 2 months after publication, Afro-Vegan was named by Amazon.com one of the best cookbooks of 2014.  In December it was nominated for an NAACP Image Award in the Outstanding Literary Work category. He lives in Oakland, CA with his wife, Jidan Koon, and their two daughters. 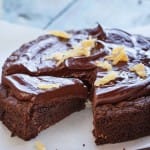 Bryant Terry is a celebrated vegan chef, activist, and author of the cookbook “Afro-Vegan.” He’s also a Buddhist.