In the Summer 2019 issue of Buddhadharma: The Practitioner’s Quarterly, Mark Unno reviews American Sutra: A Story of Faith and Freedom in the Second World War by Duncan Williams. 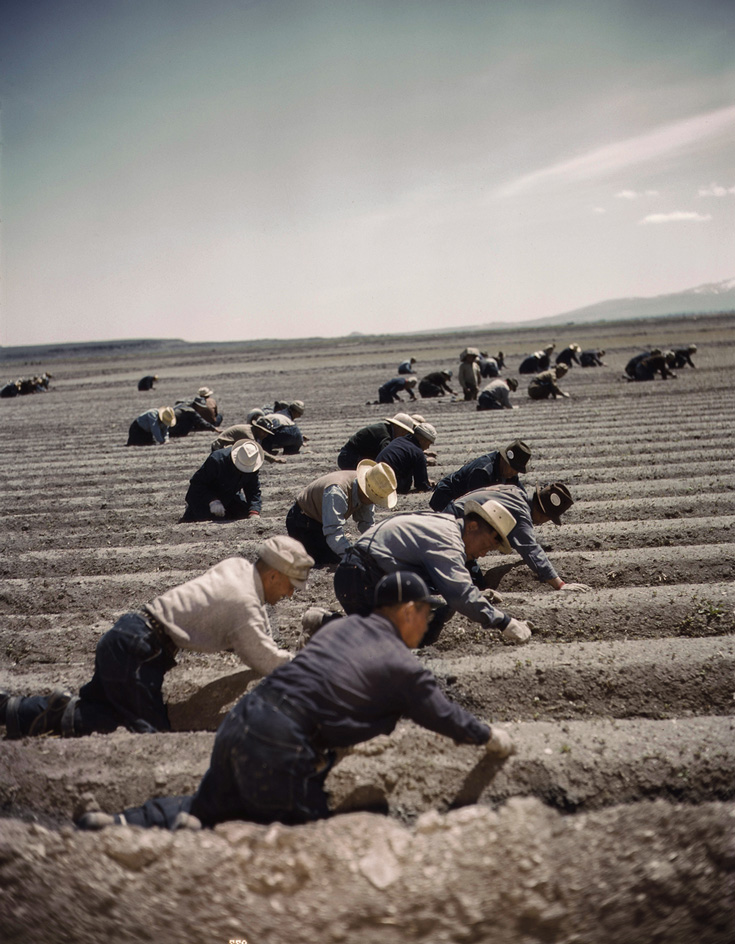 Interned Japanese Americans working in the fields at the Tule Lake internment camp in California, 1942 or 1943. Courtesy of The Library of Congress, LC-USW36-786; 1939.

The earliest Buddhist scriptures offer a striking image of the Buddha fighting off the delusions of the dark deity Mara in his final push toward awakening. Sitting in meditation under the bodhi tree, the Buddha touches the earth with the fingertips of his right hand, and the earth bears witness to his awakening. The message for those who would set foot on the Buddhist path is clear: true awakening must be an embodied realization that connects us to the great earth.

In American Sutra, Duncan Williams illustrates this principle in action, bringing to life the stories of Japanese American Buddhists who endured illegal internment in desolate locations scattered throughout the American heartland. Williams begins his chronicle with a conversation he had with Masumi Nagatomi, who recalled that when she was a young girl, the FBI showed up on her family’s doorstep to interrogate her father. It soon became clear that, in the wake of the attack on Pearl Harbor, the family would be rounded up and imprisoned, forced to leave virtually everything they owned behind in their rented farmhouse in Madera, California. Her father, unable to bring himself to discard the family’s Buddhist scriptures, buried them in the backyard. After their release from the internment camp, her family returned to the farmstead to recover whatever belongings remained but found everything had been obliterated. The few possessions they’d had on earth were gone forever.

This bleak chapter was not the end of the story, however, for Nagatomi’s family of origin, or for the more than 100,000 other Japanese Americans who endured the internment camps—nor for Japanese American Buddhism. Though cherished family scriptures that had been passed down for generations may have been lost or destroyed, Japanese American Buddhists found that the buddhadharma ultimately did not depend on preserving the literal words on the page; it would rise up with their Buddhist spirits, as if sprouting from the earth itself.

In American Sutra, Williams, a professor of religion and East Asian languages and cultures at the University of Southern California, offers an account that is remarkable on several fronts. First, it is rich in ethnographic and historiographic detail. And although based primarily on historical records—including publications, official documents, correspondence, and journal entries—many of the cited sources provide first-person accounts, lending an approachable, human tone to the work. Much of the richness of the narrative derives from Williams’ painstaking effort over many years to collect, sift, and compile his research into a complex yet eminently accessible form.

Williams frames his account within the larger arc of Japanese Buddhist immigrants arriving in Hawaii and the West Coast of the United States, following their lives up to, through, and after the period of internment during the war. Brought into the country as cheap farm labor, deprived of the rights of citizenship and land ownership, and thrown into internment camps during the war, they were faced with the double whammy of severe racial and religious discrimination as they survived in and emerged from the camps. Yet, throughout their lives, most found ways to live with determination, nurture their religious lives, families, and communities, and slowly build new lives.

Although there are other groundbreaking and eye-opening accounts of the internment, such as Lawson Inada and Patricia Wakida’s Only What We Could Carry: The Japanese American Internment Experience, and Mary Matsuda Gruenewald’s Looking Like the Enemy: My Story of Imprisonment in Japanese American Internment Camps, Williams’ focus on the religious and interreligious context of the internment and his objective, third-person lens provides the reader with a distinctive perspective that facilitates historical understanding and contemporary reflection. Williams’ own thorough grounding as a scholar in the field of Japanese Buddhism, and his even-handed approach, show that internees had to navigate a complex terrain of multiple sectarian identities within Japanese Buddhism, which required cooperation, resource sharing, and sometimes the holding of separate services. Among the internees were devotees of Soto and Rinzai Zen, Jodo and Jodo Shinshu Pure Land, Shingon, Nichiren, and Shinto, derived from indigenous practices involving kami, or Japanese gods and goddesses. There was also a smaller, but significant, number of Japanese American Christians who often received more favorable treatment due to their affiliation with the dominant religion in America.

When the 442nd—an all-Japanese American regiment, and the most decorated unit in the Second World War—was recruited from among internees and deployed to the European theater, all assigned chaplains were Christian, even though the vast majority of soldiers were Buddhist. Field burials were conducted using Christian rites, without exception, and resting places were marked with a cross. When internees were released from the camps, Buddhists were often not allowed to return to their temples, or even gather for religious services, violating their right to freedom of religion. This was a very different outcome from that of their Christian counterparts, who often received significant aid from Christian ministers and churches. 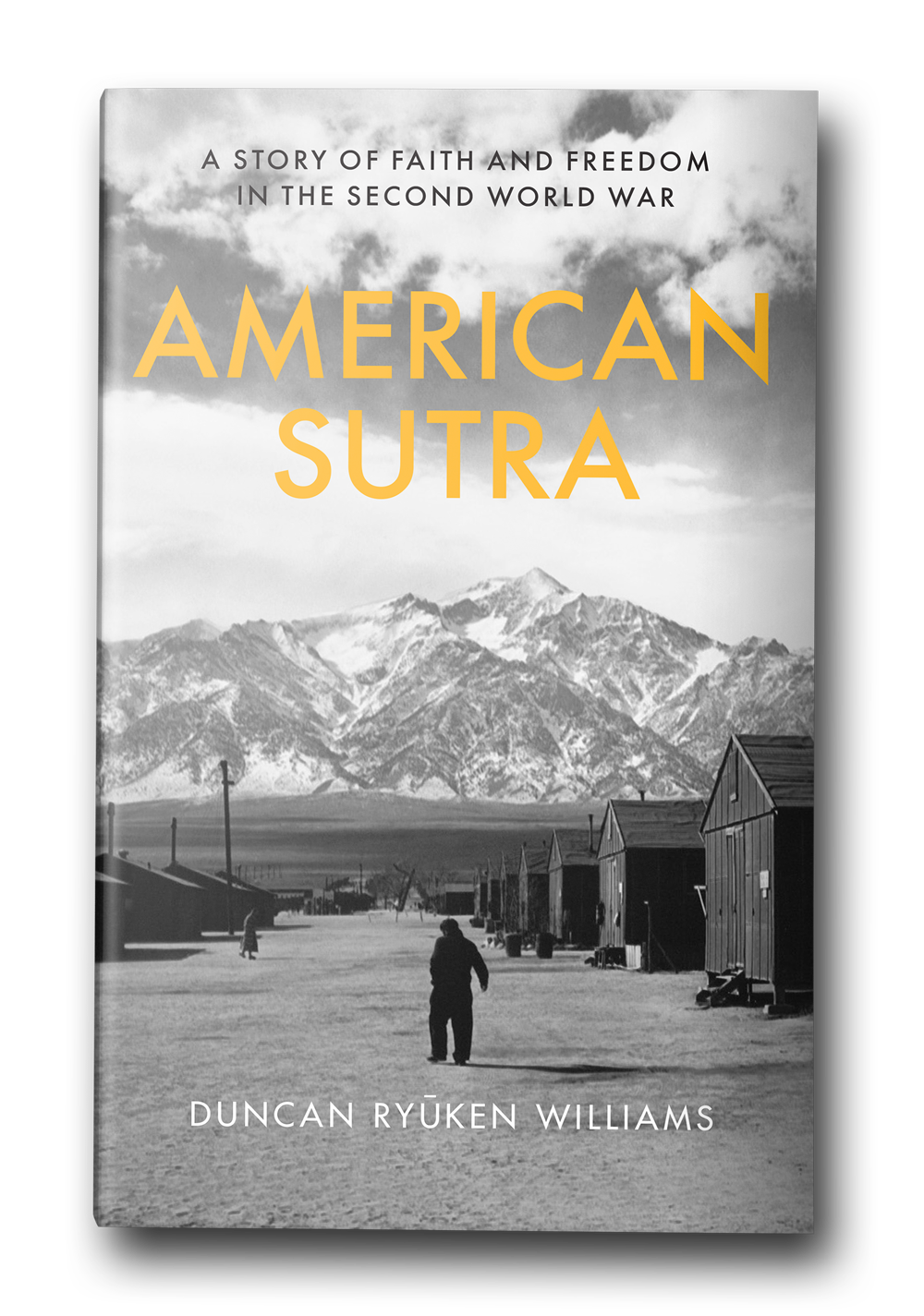 Williams includes accounts of exceptional individuals who did come to the aid of Japanese American Buddhist internees, including such figures as Rev. Julius Goldwater, a pioneering Buddhist minister, scion of the wealthy Goldwater family, and cousin of Arizona senator Barry Goldwater. Julius Goldwater drew on his family’s resources and reputation to provide texts, ritual implements, and opportunities to hold Buddhist services in the camps, and continued his assistance in the post-internment and post-war period, even as other white Americans hurled racial slurs at him for being a “sympathizer.” These friends to the Japanese American Buddhists even included some Christian ministers, who, while favoring Japanese American Christians, offered assistance either out of a sense of religious purpose or simply their humanity. Among their numbers was Rev. George Aki, a Congregationalist who helped to arrange a Buddhist service for internees at the camp in Jerome, Arkansas. Yet the actions of these rare individuals were the exceptions that proved the rule: the vast majority of white America pillaged, castigated, excluded, or ignored Japanese American Buddhists who faced severe discrimination.

Due to this history of prejudice and discrimination, Japanese American Buddhists underwent a complex process of adaptation, assimilation, and innovation. Umbrella organizations and individual temples began to negotiate what, and to what extent, they should adopt from Christian cultural trappings to avoid the ire and prejudicial actions of the US government, camp administrators, and military guards. The legacy of this process is still evident today. One of the largest Buddhist organizations in North America, the Buddhist Churches of America, a branch of the Jodo Shinshu sect, adopted the architectural format of a church building and pews while retaining their traditional naijin, the Pure Land Buddhist altar with Amida Buddha as the central figure. In addition to chanting sutras in the traditional Sino-Japanese, they adopted English hymnals, the earliest versions of which were often composed by Christian hymnalists. More recently, new English-language hymnals, with greater Japanese Buddhist flavor in both wording and melodies, have replaced the older, heavily Christian-influenced ones.

Williams also vividly recounts some of the most extreme circumstances and prejudice faced by Japanese American Buddhists. One such account is that of Richard Sakakida, the only Japanese American Buddhist identified by the US military as a spy—an American spy working against Japan. Coming from a devout Buddhist family in Hawaii, Sakakida was an American citizen who enlisted in the counterintelligence corps, advanced to the rank of sergeant, and was deployed to the Philippines, where he was captured by Japanese military police on suspicion of espionage and subjected to severe torture. Throughout his ordeal, Sakakida was not overcome by fear, and he never broke down and revealed any American secrets. “If I was enraged during the early stages of torture, I was by then, delivered into a state of incandescent fury, particularly as [the interrogator] buried the cigarette into my penis,” he wrote. “All the torture and beating did not dampen my Yankee spirit…They not only rekindled that spirit in prison; they set it on fire.”

After returning to the US, Sakakida was treated with racial and religious bias and was suspected of having worked for the Japanese even though he was a decorated American hero. The most remarkable part of Sakakida’s story reveals how his practice of Buddhism influenced his character. After the war, he vowed to track down his torturers. When he finally confronted the three Japanese military police who had tortured him for months, they threw themselves at his feet in prostration, fearing the worst retaliation. At that moment, tears welled up in his eyes, his heart filled with forgiveness and compassion, and he offered them cigarettes and candy. Williams writes that Sakakida attributed his demeanor to his Buddhist upbringing.

The internment experience of Japanese American Buddhists, which included a requirement to take an oath of loyalty to the US even when they were not allowed to become US citizens, is the story of our nation’s history. From the genocide of Native Americans to the slavery of African Americans, the importation of Japanese Americans and other Asian Americans as cheap labor, and the projection of the dominant culture’s own darkness onto racially stereotyped Muslims, to the current predicament of Latinx migrants who are suffering unspeakable treatment even as their labor remains indispensable to the operation of the American economy, the white Euro-American dominion over the planet has required the subjugation of colored bodies as the bridges to the earth. To begin to end the cycle of violence perpetrated on other peoples and on the earth itself requires one to stand before the cycle of karmic violence in recognition and to stop it with one’s own body in the present moment of awareness, here and now, as Richard Sakakida did in facing his Japanese captors as well as white America’s racism and religious prejudice—absorbing, digesting, reflecting, and overturning the cycle of violence into the unfolding of unconditional compassion. As the story of the Buddha shows, true Buddhist awakening must be borne witness by the body of the earth herself.

Williams’ account of Japanese American Buddhists in internment—tales of suffering borne with dignity, and thereby transformed into great compassion—is the fruit of painstaking labor to unearth the buried stories and lives upon which American Sutra has been inscribed. The story of their resilience would be inscribed on their very bodies as their tale of endurance and dignity. Like the plants they sowed with their hands, the dharma grew directly out of the earth, which bore witness to their lives of devotion. One cannot know the story of Buddhism in America, the story grounded in the reality of the earth, without bearing witness to the open wounds that, upon deeper examination, turn out to be portals to boundless compassion.