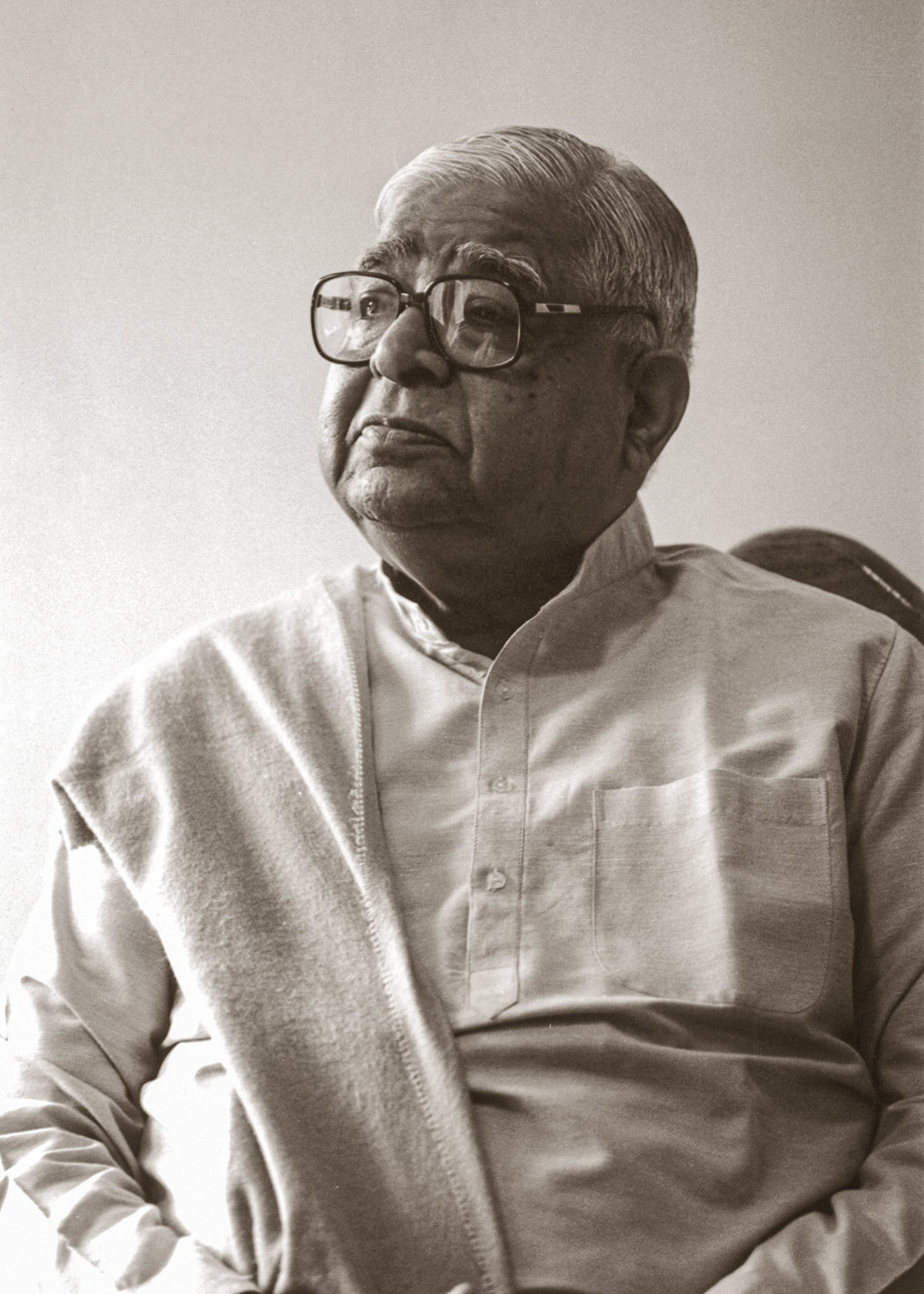 I first heard the name of the meditation teacher S. N. Goenka in the early 1990s, while living in Nepal. I was there conducting research on the rise of Theravada Buddhism among ethnic Newar Buddhists in the Kathmandu Valley. From the very first years of the revival, the story of Theravada’s return to Nepal had been bound up with modernist efforts to reform and strengthen Buddhism. In interviews, at public events, and over bountiful meals at laypeople’s homes, my interlocutors praised what they perceived as Theravada’s rationalism and transparency—a purity that they contrasted favorably to the Mahayana–Vajrayana tradition that they were born into and had known.

I was more than a little surprised, then, when increasing numbers of my research subjects—and indeed, of the Newar Buddhist community as a whole—began to speak often and admiringly about an Indian meditation teacher who, they said, was teaching an even purer form of buddhadharma at a meditation center on the edge of the Valley. Indeed, my friends told me, the practice that was being taught there—vipassana, or insight meditation—was so logical, scientific, and universal that even though it was the truth taught by Shakyamuni Buddha, it shouldn’t actually be called a religion at all!

Meditation traditions with roots in particular places and times are taken up by new audiences in a changing world.

Over the following years, I watched as the Kathmandu center expanded in size and additional centers were established in other Nepali cities. And as demand for vipassana courses was exploding in Nepal, enthusiasm was similarly growing elsewhere. Today the Goenka organization operates nearly two hundred full-time meditation centers in at least thirty-five countries, offering thousands of people per year the opportunity to participate in their signature ten-day courses in a wide range of languages, plus additional programs for experienced students.

The exceptional teacher behind these remarkable events is the man at the center of a new biography in the Shambala Life of the Masters series. S. N. Goenka: Emissary of Insight offers a rich history of Satyanarayan Goenka (1924–2013) and the meditation lineage that he founded, plus a well-curated selection of Goenka’s writings, many of which are available in English here for the first time. A book of this sort is long overdue, given Goenka’s role in the modern spread of vipassana practice. In addition to his broad role in popularizing vipassana across the world, he introduced some of the best-known North American meditation teachers to insight meditation practice, specifically helping to seed the mindfulness movement in the United States.

In Emissary of Insight, Stuart offers a comprehensive account of Goenka’s life, his work as a teacher, and strategic moments in the development of the global organization he built. Along the way, he takes issue with what he identifies as a one-sided representation of Goenka the person and teacher that reinforces a particularly Euro-American image of the man while overlooking other aspects of his identity. The result is an engaging, informative, and, at times, argumentative book that offers insight into the life and thought of this important teacher while raising questions about the cultural dynamics of Buddhist modernity and the ways in which meditation traditions with roots in particular places and times are taken up by new audiences in a changing world.

The biography, accounting for just over half of the text, is organized chronologically and traces several themes: Goenka’s early life in Burma and India; his relationship to his teacher, Sayagyi U Ba Khin; the years of his teaching mission in India; and finally the emergence of what Stuart calls “the global Goenka,” a label he uses to distinguish this persona from the more complex picture that he aims to provide. It begins by detailing Goenka’s early life as a member of the Indian community in Burma before being initiated into vipassana meditation in 1955 and experiencing what he would call a “second birth.” Drawing on previously untranslated autobiographical writings in Hindi, Stuart reveals the young Goenka to be a curious, creative, and deeply spiritual man whose interest in Vedic philosophy and commitment to Hindu householder values would shape key aspects of his later teaching—including his representation of vipassana as a non-Buddhist practice. Stories of Goenka’s violent temper or of the migraine headaches that he suffered before sitting his first meditation course will be familiar to some readers. However, discussions of his filial devotion, his love of Sanskritized Hindi literature and poetry, and his influence by early twentieth-century Hindu cultural nationalist narratives offer a fuller picture. They also lay the groundwork for Stuart’s main argument—that Goenka was a product of his age and culture, an age and culture that was neither as modern nor as secular as many representations of the man would suggest.

The following chapters develop this insight, focusing first on Goenka’s relationship to his teacher. Stuart’s description of the esoteric and millennialist elements of U Ba Khin’s thought are of particular importance here and may be surprising to readers who know Goenka only as the purveyor of a rationalized, scientific, and entirely secular tradition. For instance, we learn that U Ba Khin believed fully in the presence and potency of supernatural beings, that he attributed his own success in bringing students to enlightenment to protective deities and to the power of his own metta, and that his students considered him an incarnation of the coming Buddha, Maitreya. Similarly, we learn that he recognized Goenka as the karmically destined historical agent who would return vipassana from Burma to its birthplace in India, from whence it would spread around the world—an identity that Goenka himself eventually claimed.

Having demonstrated that the tradition to which Goenka claimed allegiance rested on worldviews that remain unknown to many contemporary students, Stuart turns to the question of how that came to be. Specifically, he asks how this “cultic Goenka“—a devotee committed to serving … as a powerful channel” for his teacher’s psychic force—split into, and came to be eclipsed by, two other identities: “a global Goenka who taught a universal secular technique” and an Indian Goenka “who taught a public nonsectarian dharma amenable to the politics of Indian pluralism.” His answer highlights the challenges Goenka faced in promoting a Buddhist-identified meditation technique outside of the traditional Buddhist world, and the ways that his efforts to adapt to the environments he faced led to the secular rhetoric and organizational structure that defines the lineage today.

If this chronicling of Goenka’s life shows us anything, it’s what a complex undertaking he took on.

To this end, Stuart identifies key moments when Goenka broke from other teachers carrying on U Ba Khin’s tradition to establish his own global lineage, as well as when several of his own Anglo-American students split from him to establish a more ecumenical American Buddhism. His argument, simply put, is that Goenka understood himself as a planter of karmic seeds and that he adapted to fulfill this vocation. In contrast to U Ba Khin, who aimed to bring students to stages of enlightenment, Goenka saw his own role as giving “seeds of Dhamma” to the largest possible number of people. Thus, he strove to “speak to different audiences in different registers and to curate an identity palatable to a global audience.” This imperative, Stuart suggests, led to his split with the U Ba Khin organization, as Goenka considered its Buddhist identity an impediment to missionary expansion in India, where strong Hindu biases against Buddhism remained. It is also the origin of his image in the US as the secular envoy of a scientifically compatible technique. Contrasting English and Hindi descriptions of specific events and theories, Stuart proposes that Goenka and his students collaborated to craft an image, narrative, and brand calculated to resonate with diverse audiences while downplaying features that might seem alienating.

The chapters that follow the biography present a compelling selection of Goenka’s speeches and writings, composed in different languages and at different times during his life. They include a selection of his poetry; translations of biographical writing; and technical descriptions of the practice and its relation to mainstream Theravada thought, Buddhist suttas, and jhana practice. Together, they illustrate the argument that Stuart presents in the biography, offering windows into Goenka’s philosophical thought, affective sensibilities, and rhetorical skill. Current students of Goenka, or anyone interested in better understanding his vision of his mission or of the technique that he taught, will appreciate these resources. 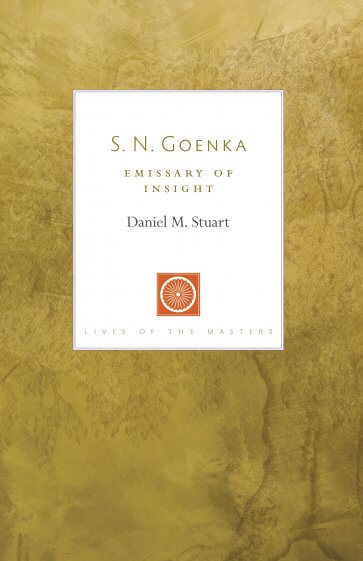 S. N. Goenka: Emissary of Insight makes a valuable contribution to English-language knowledge of this historical teacher and to public understandings of the global mindfulness movement. It is, however, not without weaknesses. In his determination to bring to light occluded aspects of Goenka’s persona, Stuart himself simplifies. In the Introduction, he confesses his frustration with the fact that the Goenka he has uncovered—one who is faithful to “Indian, Burmese, and Hindu worldviews and value systems”—is not broadly acknowledged in the US This sentiment appears again in a combative final chapter in which he accuses American students who “chose to overlook the historical Goenka himself” of refusing to recognize his extra-secular commitments because “a true examination of his very complex identity would… [force] them to reassess their identities in uncomfortable ways” (152).

Stuart identifies as a Goenka student himself, so these are strong words toward dhamma brothers and sisters who are carrying on their late teacher’s tradition using characterizations that their teacher himself offered, however partial a picture that may yield. Furthermore, his narrative ignores the significant presence of bilingual English–Hindi speakers in the organization. What may be downplayed in English is not hidden to them, who are certainly part of the global scene—including in North America—but who appear in the text only peripherally. And it is here that vipassana’s growth in Nepal is particularly illuminating. Born Buddhists in a Hindu-majority nation, my Nepali meditator friends were well aware of the Asian religious underpinnings of Goenka’s teachings, which they heard in the Hindi chanting and discourses. Yet they also embraced vipassana as the rational, universal practice that he described it to be, valued it for that reason, and even considered this indicative of its Buddhist purity. (Similarly, North America students are often attracted by the cultic elements they more dimly perceive.)

The question here, then, is not whether Goenka was or was not the secularized figure he has been made to appear in English. It is how to describe all the things that Stuart shows him to be—and what this says about the fundamental inadequacy of analytical dichotomies like “Asian” and “Western,” “modern” and “traditional,” and, especially, “religious” and “secular” to account for actual human reality. If this chronicling of Goenka’s life shows us anything, it’s what a complex undertaking he took on and how skillfully he navigated significant cultural differences and remarkable historical change to create a modern organization in fulfillment of a millennial mission rooted in a Buddhist worldview. S. N. Goenka is indeed a master who “brought [secular] mindfulness to the West,” as his New York Times obituary announced. But Stuart is right, too, in insisting that he was also much more.

Lauren Leve is an associate professor of religious studies at the University of North Carolina at Chapel Hill. She is the author of The Buddhist Art of Living in Nepal: Ethical Practice and Religious Reform. Her research interests include modern Buddhism, the cultural dynamics of globalization, gender, and the internationalized lineage of S. N. Goenka.