Jan Chozen Bays ponders the question of evil’s origin, considering the Christian and the Buddhist perspectives on good and evil. 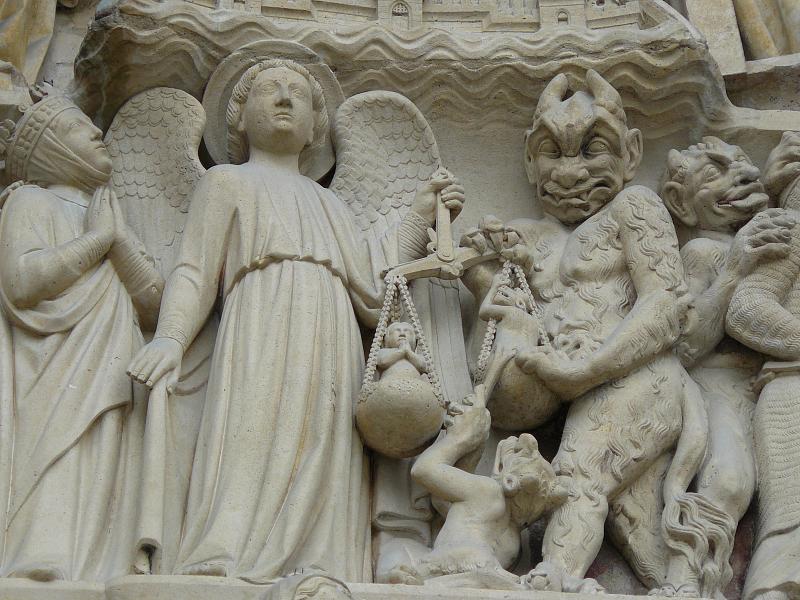 I’ve been pondering the question of good and evil, a question my Christian mother also deliberated upon. A few weeks before her sudden death from a stroke at age eighty-four, she told me, “I’ve come to the conclusion that evil doesn’t exist as a separate entity. I think that evil is created when man turns away from good.”

When I asked about God in my childhood, my mother said that she felt that God was love. That would mean that evil was its opposite, anger or hatred. This is congruent with the teachings of both Jesus and the Buddha. Then, late in life, my mother decided that God was energy. She reasoned that God must be in everything, and since God was completely fair, it must be a force that is fully present in all people and creations. Only energy fit these criteria.

In a meeting over whisked green tea with my Zen master, Shodo Harada Roshi, my mother told him of her new understanding of God as energy. He looked deeply into her eyes and said, “That’s right! But you only have half of it.” She grinned like a child, so pleased to have been given a new question to ponder. She referred to him thereafter as “my Roshi.”

My mother wanted to know how to work on the “other half” that Harada Roshi had assigned her. What could be the opposite of energy? She died before she told me about any new insights.

There’s another interesting question embedded here. Is evil outside or inside us? Christian scriptures speak of the devil and Buddhist sutras talk of Mara, the Evil One, as if they were both outside forces or independent entities. When the Buddha was doing nighttime meditation while lying down, Mara attacked him for spiritual laziness. When the Buddha was practicing diligently, Mara sneaked up and sneered at him for taking the spiritual life too seriously.

I’ve noticed that Mara talks to the Buddha in a familiar voice, the one we call the inner critic. The inner critic and its partner, the outer judge, are impartial—whatever comes into their field of awareness, they criticize it. Resting meditation or much-needed sleep, one-pointed concentration or drowsiness, determined attempts to crack the koan Mu or the practice of the gentle inner smile—all are subject to attack.

In Buddhist terms, the inner critic is skeptical doubt, one of the fundamental barriers to enlightenment. It is an energy that criticizes you, your teacher, your meditation group, or any organized religion. Some people confuse the voice of the inner critic for another internal voice, one that is essential to practice: the voice of great doubt. If the inner critic worms its way into your practice, it can destroy it. Great doubt has exactly the opposite effect; it is the fuel for practice. It says, “I have to know what this crazy cycle of life and death, pain and joy, is all about. I will not rest until all my doubt is resolved.”

If evil is external, then we will always be working to kill someone or something outside of ourselves. If evil is internal, and originates with the voices in the mind, then what is our appropriate work?

There are no bloody battles with the forces of evil in the Pali canon. When Mara appears in one of his many guises, all the Buddha has to do is to recognize him. As soon as the Buddha says, “Mara, is that you?” the Evil One slinks away, sad and disappointed, saying, “The Blessed One knows me.” If we want to combat evil empires, our fundamental work is to recognize the earliest stirring of evil, or “unwholesome,” thoughts in our own minds and let them wither away from inattention. We must also recognize the early arising of thoughts that are good, or “wholesome,” and help them to grow.

“It’s fine to work on the origins of evil within me,” one might argue, “but what about all the evil happening in the world—the atrocities of war, starvation, and unspeakable crimes that are plastered all over the media?” First, we have to be realistic. The only person we have a hope of changing in a fundamental way is ourself, and, as we know, that’s damn difficult to do. If we decide to do practical work to help end human suffering, we have to undertake it without the spirit of opposition that seems to escalate into the very thing we are trying to prevent. (It’s sadly funny to hear people arguing vehemently about war.)

There are infinite opportunities to work for good. We start by living by the precepts. Then we can petition a congressperson, become a compassionate police officer, practice nonviolent communication, be patient under duress, or do loving-kindness or tonglen practices for those on both sides of a conflict. We can just be kind to someone who irritates us. I’ve noticed that it’s a lot easier to fume about a distant war than to call up a person we’ve hurt and apologize.

The “other half” that Harada Roshi challenged my mother to find is the opposite of energy manifesting as forms. It’s emptiness—the Great Potential—out of which all that energy arises: the creativity and the destruction, the ally and the enemy. It is within us that the form and emptiness meet.

If every action has an opposite and equal reaction, how can we work for good in the world of form and not create evil? It is only possible when we step outside these opposites, when we empty ourselves out continually.

This is the challenge of the middle way: to be compassionate without becoming overwhelmed and depressed by the suffering of the world, to be determined without becoming aggressive and anxious, and to have clarity of mind without becoming indifferent or cruel. We start with the most intimate work, the inner work. Then we move outward, working for peace in a milieu of nonopposition. We return always to emptiness, the Great Potential.

This is not the stuff of headlines, you can’t get a big grant to do it, and yet, in my experience, it is the most practical, the most profound, and ultimately the most powerful way to work for goodness and peace in the world.