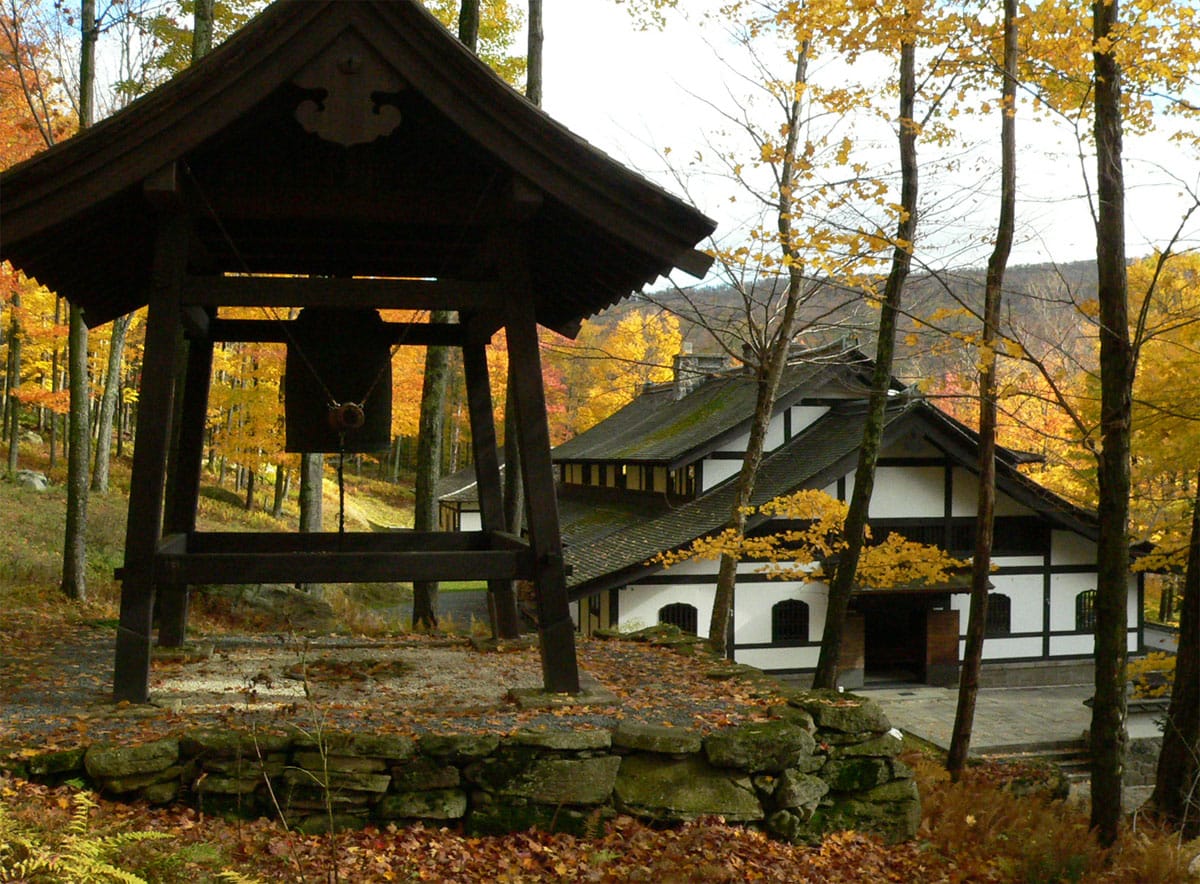 Logan Beaudry befriends a strange newcomer and fellow smoker during a weeklong Rinzai retreat and learns how not to respond to the question, Where are you from?

On the first day of a seven-day sesshin I spotted him in the dining hall, slumping at the edge of a neat line of monks, nuns, and lay practitioners, all sitting upright in crisp robes with their eyes cast downward. In contrast to the conformity of monastic ritual behavior, he seemed oblivious to the rules of the game. This miscreant among us intrigued me.

After the meal was finished and our bowls were wiped clean, he took a deep breath and stretched his arms outward. I could tell he wanted a cigarette. As we stood to leave the hall he made no effort to straighten his attire, so the traditional Buddhist garment he wore looked more like a bathrobe that had been quickly thrown on as an afterthought. His distinction was in his dishevelment.

Unlike the mayhem that is Manhattan or the lively baroque scene in Montreal―or any of the numerous places I’ve lived―there is something remarkably tidy, efficient, and well-organized about a Zen monastic setting. During my yearly sojourn at Dai Bosatsu Zendo, a Zen monastery in upstate New York, the order and simplicity, the meticulously planned activities between the silence, and the ringing of bells engendered freedom to observe the chaos of the mind, and my chaotic mind had landed on this slovenly newcomer.

Later that evening, we wandered into the chill of a pitch-black night and I watched him light up and breathe a sigh of relief. He stood alongside a penguin-shaped nun, an amiable devotee whom I’d met during previous retreats. It was she, I surmised, who had encouraged his introduction to Zen practice.

As the sesshin unfolded I observed him going through the various states of angst, restlessness, elation, exhaustion, and excruciating discomfort that I knew all too well. He slouched distractedly through kinhin (walking meditation) with no attempt to conceal his wandering mind, a concealment at which I’m adept, and as the days counted down he neglected to shave, and now looked like a hobo who had stolen a monk’s robe.

Although I generally refrain from talking during retreat, as it dissipates the energy that long hours of zazen requires, beneath the stars I exchanged a few words with my fellow novice. I learned that he lived in Maryland and was engaged to the earnest young nun. Because we shared the terribly taboo trait of nicotine addiction we became partners in crime, and sometimes stood silently at night, our cigarettes glowing like fireflies in the forest.

Each day seemed longer than the next as we moved through sensory deprivation. No television. No telephone. No talking, at least theoretically. No New York Times. No mail. No music. No wonder I was observing the newcomer. But onward we marched, trying to find our way home, persevering without pleasures. Then finally, as is customary on the middle day, we received our little piece of dark chocolate (a reward for not running away), and bowing toward the faceless young monk who offered it, I felt the sincere gratitude that accompanies deep practice.

Just as in life, sesshin is rarely, if ever, a linear experience; rather it is one of peaks and valleys. And when our energy lagged and our concentration waned, Shimano Eido Roshi, in his Japanese warrior mode, roared like a samurai, “W-o-o-o-r-k HARD!” Feeling fortified by his strong commitment to our practice I re-dedicated myself to silence, vowing to focus inwardly until the exhilarating end arrived. (The truth is, when the end does arrive you no longer care, as the end and the beginning cease to have meaning.)

That said, dokusan, the private meetings with Roshi, were often humiliating and a reminder of why I have subjected myself to weeklong retreats throughout the years. Like the others, who had travelled from who knows where to partake in seven days of strict Zen practice, I was willing to suffer all sorts of deprivation to relieve myself of emotional pain, misery, despair, and attachment ― and to re-realize my true nature, which is humane and tolerant and as tranquil as Beecher Lake on an autumn day. Yet, feeling frustrated, I thought, How can I take a vow to save others when I can’t bloody save myself? Who are we kidding here?

Instinctively, and without premeditation, I have always stayed beyond the reach of the keisaku―the flat wooden stick often wielded by Zen masters during dokusan. Choosing to sit several feet from the teacher, I could always leave his quarters physically unscathed when I gave an unenlightened response to a simple question, such as, “So?” (Does that even qualify as a question?) Yet others, I should point out, are more than willing to take the keisaku.

With merely a bow, I have requested the stick while in the meditation hall, and although it stings, it instantly relieves the shoulders of tension. But things being what they are, I cannot testify to the value of the sharp sting of oak when it’s used as a “reality check” (in the Rinzai tradition) to encourage a student to go beyond ordinary consciousness, yet throughout history Zen stories have been filled with a thousand ways home. Now, this concept of “home” is important, as you will soon see.

Before, during, and after my private meetings with Roshi I experienced self-loathing, self-doubt, deep serenity, enormous grief, and liberating insights. A seven-day retreat is filled with a lifetime of emotions. The impact is often glorious and, in my case, life-changing. The insights brought on by long days of practice are innumerable. Once I even experienced the clear realization that the monastery itself was an illusion. (Seriously, what a relief that was!)

As my dependence on external things fell away, on the sixth day I decided to forgo the interview. While others anxiously waited their turn to see the Godfather of Zen, I, walking backwards, bowed quickly out of the dharma hall and scurried down the granite steps to the ground floor. Sliding sock-footed along the shiny wooden planks―like an animated cartoon character―I reached the exit and slipped outside for a quick smoke before the bell demanded my return.

Standing in the glare of the afternoon sun, I heard the door open behind me, and my fellow misfit appeared at my side. I said nothing, but could hear his agitated breathing, and could see from the corner of my eye that he was perspiring profusely. When he lit a cigarette his hands shook uncontrollably, and he emanated so much anxiety and terror that I felt deep compassion.

Unable to keep silent any longer, I asked, “Are you okay?”

Exhaling deeply, he replied, “No.”

He had just come from dokusan, and I realized he’d encountered a reality check. Feeling simultaneously concerned, sympathetic, and amused, I asked, “What happened?”

Inhaling deeply, then speaking through a cloud of smoke, he offered this: “If Roshi ever asks you where you are from, the answer is not Baltimore.”

With a sigh, he turned toward the door and went back for more.

Logan Beaudry was introduced to Buddhism during an extended visit to Japan and since then has attended numerous retreats at Dai Bosatsu Zendo in New York’s Catskill Mountains, and the Rinzai-ji Zen Center in Los Angeles. She lives in Vermont and is working on a series of literary nonfiction essays.