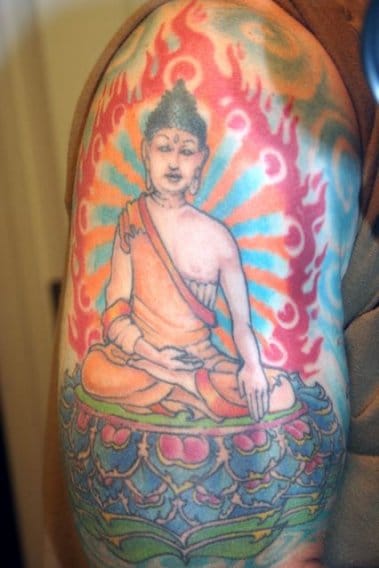 Just one of the tattoos from TheWorstHorse.com, this one submitted by Gary Steinberg of the Metta Foundation.

Rod Meade Sperry questions if getting a Buddhism-inspired tattoo is just another gesture of spiritual materialism, or disrespect.

Over at TheWorstHorse.com, I’ve done lots of coverage of Buddhist tattoos. (For example, here, here, and here.) I’ve found them to be a fascinating subject, and for a few reasons. First, because they can be, and often are, beautiful. Second, because people’s reasons for getting them run the gamut from the absolutely inane to the sincere and aspirational. Third, because there’s a sort of built-in controversy-and-discussion factor: getting a Buddhism-inspired tattoo can be just another gesture of spiritual materialism, or at least seen that way. As someone who has a clutch of tattoos, some dharmically inspired, I think it’s valuable to look at the motives behind getting them, especially long, long after the scabbing has dropped away: Do our dharma-tattoos still have the meaning we saw in them? Did they ever to begin with?

There’s another controversial aspect, too, one that’s often quite culturally driven: some think that getting them is just downright disrespectful in any case (most specifically, in cases below the waistline). British tourist Antony Ratcliffe learned this the hard way, getting deported by Sri Lankan authorities last week for sporting a Buddha face on his arm.

Though said authorities claimed that Ratcliffe was unreasonable and spoke detrimentally against Buddhism, his story paints a completely different picture. As he told the BBC: “I like the artwork in tattoos obviously and, due to my belief in Buddhist philosophy which I have followed for many years, I thought a quality tattoo of the Buddha was rather apt.”

You can see it, and read the rest of Ratcliffe’s story by way of the BBC, here.

As noted above, the distinction here can often be a cultural one. (Here, for example, is a story from two years ago, in which Thailand warns against Buddhist tattoos below the waist as being offensive.)

And yet, for many, such tattoos can be an act of commitment to Buddhist teachings; getting them, after all, is as “permanent” a gesture as we can make — it’s a bodily vow, an inner wish made public.

Do you have one? Would you get one? Do you love it? Have regrets about it? Let us know.