A religion known for nonviolence is being used to fuel a genocidal campaign against the Muslims of Burma. Buddhist teacher Jack Kornfield, recently returned from Burma, urges us to join the call for peace. His full article from the September 2014 Shambhala Sun (now known as Lion’s Roar) appears below — you can also download and share this PDF of the article — along with with helpful contact info for showing your support and sharing your voice, and the full text of an open letter, “World Buddhist Leaders’ Response to the Growing Ethnic Violence Against Muslims in Myanmar.” 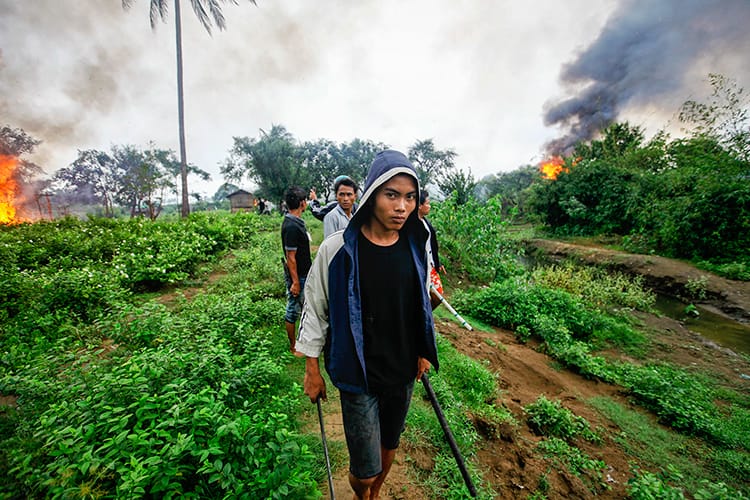 Neither in anger nor hatred
Should anyone wish harm to another.

—The Buddha, in the Metta Sutta

On the surface, upcountry Burma is not very different than it was in 1971, when I first trained there as a monk in the monasteries of Mahasi and Sunlun Sayadaw. The green and dusty landscape is dotted with temples and golden pagodas. There are poor hardworking farmers and small towns with colorful marketplaces. The Burmese people remain extraordinarily gracious and goodhearted, the nation a revered center of Buddhist teachings.

But now there is also fear, an underlying tension spreading across the country. I recently returned from working in Burma with peace activists and for Partners Asia, supporting schools, shelters for orphans and battered women, HIV programs, rural clinics, and other amazing projects across the land. I found amid the positive changes and slow movement toward democracy a growing religious and ethnic intolerance and conflict.

News reports show monks crisscrossing Burma using Buddhist teachings to encourage violence and the passage of inhumane laws. Here in the West, people are shocked. Isn’t Buddhism the religion that preaches against violence and killing? Are these stories true? How can we understand them?

The radical monks have successfully linked buddhadharma with nationalism.

The stories are true. Traveling across Burma recently, I encountered some of these monks who are drumming up hate and jingoistic fervor. They don’t want to talk about peace and have succeeded in sowing mistrust across much of the country. Under their influence, taxi drivers, and shopkeepers from Rangoon to remote towns talk about their fear of a Muslim takeover and “the Buddha’s teaching” that sometimes violence is needed to protect the nation. This dangerous situation needs some explanation.

The biggest source of conflict is the unsettled situation of the Rohingya Muslims in Burma’s westernmost state. Rakhine is a beautiful land bordering Bangladesh that was for centuries a great seafaring kingdom. But ever since the central Burmese kings conquered Rakhine, the people there have been treated badly. And over the last century, a million Rohingya Muslims, seeking new opportunity or fleeing poverty and mistreatment in present-day Bangladesh, have settled in Rakhine. Today, overpopulated Bangladesh doesn’t want them back and the Rakhine natives, already poor and mistreated by the central government, fear they are losing land and livelihood to the Muslims immigrants, even though many Rohingyas have lived there peacefully for decades.

The current economic pressure has made the situation ripe for fear, violence, and political exploitation. Muslim homes and businesses have been torched and 100,000 Rohingya Muslims, many of them women and children, have been forced into impoverished refugee camps. When I spoke to Rohingyas from Rakhine, their eyes got wide with dismay, and there was a palpable helplessness and fear of attacks by the Buddhist majority. Recently, the drumbeat of violence against Muslims and other minorities has spread to other parts of Burma, often with the tacit approval of the local police and military.

I witnessed firsthand the results of the spreading violence in the town of Lashio in northern Shan state, where this past year a mosque, businesses, and a Muslim orphanage were burned not far from the town’s most revered pagoda. While the local Buddhists I spoke to were friendly, they were also worried, and from their ranks came mobs who torched their Muslim neighbors.

Of the nearly half a million monks and nuns in Burma, those espousing hatred and supporting violence are a handful, less than one percent. But their message of fear and prejudice resonates because of several factors.

Buddhism teaches the nobility of all, regardless of caste, race, or creed. But humans can misuse anything, including dharma, and these monks have become fundamentalists who espouse prejudice in the name of dharma.

First, the radical monks have successfully linked buddhadharma with nationalism. Buddhism teaches the nobility of all, regardless of caste, race, or creed. But humans can misuse anything, including dharma, and these monks have become fundamentalists who espouse prejudice in the name of dharma. With 40 percent of the Burmese population in 135 ethnic groups, three million Muslims, and a dozen simmering civil wars, the misguided monks tell Burmese Buddhists they need to fight against those who are different to maintain the nation.

Second, since the recent transition to quasi-civilian rule, there is increased insecurity, predatory economic development, and political deception. On previous trips under the military regime, friends could have been imprisoned or tortured if I had been overheard speaking to them about Aung San Suu Kyi. Now public conversation is allowed, but there are still dangers for journalists and activists.

With the lifting of military dictatorship, simmering ethnic and religious tensions are being exploited by misguided monks, political groups, and the remnants of the dictatorship to gain power. It is said that some of the worst monks may be Secret Service men who have taken robes and are deliberately stoking fears to turn people back to the military and away from Aung San Suu Kyi. Radical monks play on the historical memory of Muslim expansion across Asia in formerly Buddhist cultures. Scare stories about Muslims raping Buddhist women and having huge families and overpopulating the land are widely disseminated.

Surprisingly, there is widespread ignorance in Burma of many core Buddhist teachings. Most of Buddhist practice in Burma is devotional. Prayers and offerings express a beautiful spirit of generosity and a belief in merit-making, karma, and rebirth. The elaborately decorated temples are regularly awash with joyful community sharing, chanting, and support for the monks.

In this culture of devotion, the teachings of the noble truths and eightfold path, of nonviolence, mindfulness, meditation, and virtue, are not emphasized. And the Buddha’s admonition to see and think for yourself is lost entirely. The Burmese education system does not teach people to question authority. In a middle school class, ardent and shining-faced students told me how they always learned by rote and had not asked a single question in their school career. Added to this, fifty years of secret police and military oppression have left many Burmese fearful and easily misled.

Fortunately there are also abbots, activists, and Muslim leaders across Burma who embody the Buddha’s admonition to “hold all beings with boundless loving-kindness.” I was inspired by the courage of those who are trying to defuse this deplorable situation. Some work publicly, others behind the scenes, to educate monks and communities in Buddhist teachings about respect, nonviolence, and conflict resolution. But the hate speech has created a dangerous situation, and those who speak out publicly against prejudice are targeted and harassed by the anti-Muslim goons. In spite of this, leaders like Zin Mar Aung, who won the International Woman of Courage Award, and Ven. U Nayaka Sayadaw, abbot of a Mandalay monastery with seven thousand monks, hold aloft the dharma banner of respect for all.

While the solution lies with the Burmese themselves, there are many outside groups trying to encourage the best of the Burmese Buddhist tradition of tolerance, such as Partners Asia, the Catholic Peacebuilding Network, Hope International, United to End Genocide, and the International Network of Engaged Buddhists. Unfortunately, Médecins Sans Frontières and the UN have now been banned from Rakhine because the government doesn’t want honest reports on the situation to reach the outside world. Aung San Suu Kyi, who holds a long-term vision of development for Burma with immense dignity, grace, and courage, encouraged those of us who met with her to engage with all parties in the conflict. Unfortunately, the military-imposed constitution still hasn’t been changed to allow her full political rights and she is limited in her own ability to respond.

In past months, I organized a group of concerned Buddhist elders, including the Dalai Lama and Thich Nhat Hanh, to publish a full-page letter in Burmese newspapers encouraging the Burmese to stand up for their noble tradition of respect and nonviolence. Read the full text of that letter below. But first, see our list of links for keeping updated and adding your voice to the call for peace in Burma.

How you can help: where to voice your concerns

How you can help: where to show your support

To Our Brother and Sister Buddhists in Myanmar,

As world Buddhist leaders we send our lovingkindess and concern for the difficulties the people of Myanmar are faced with at this time. While it is a time of great positive change in Myanmar we are concerned about the growing ethnic violence and the targeting of Muslims in Rakhine State and the violence against Muslims and others across the country. The Burmese are a noble people, and Burmese Buddhists carry a long and profound history of upholding the Dharma.

We wish to reaffirm to the world and to support you in practicing the most fundamental Buddhist principles of non-harming, mutual respect and compassion.

These fundamental principles taught by the Buddha are at the core of Buddhist practice:

We are with you for courageously standing up for these Buddhist principles even when others would demonize or harm Muslims or other ethnic groups. It is only through mutual respect, harmony and tolerance that Myanmar can become a modern great nation benefiting all her people and a shining example to the world.

Whether you are a Sayadaw or young monk or nun, or whether you are a lay Buddhist, please, speak out, stand up, reaffirm these Buddhist truths, and support all in Myanmar with the compassion, dignity and respect offered by the Buddha.

We stand with you in the Dharma,

HH the XIV Dalai Lama Nobel Laureate Tibet/India
Though not able to be reached in time to sign this letter, HH the Dalai Lama has publicly and repeatedly stated his concern about the Rohingya Muslims in Myanmar. He urges everyone to continue to practice non-violence and retain the religious harmony that is central to our ancient and revered culture.