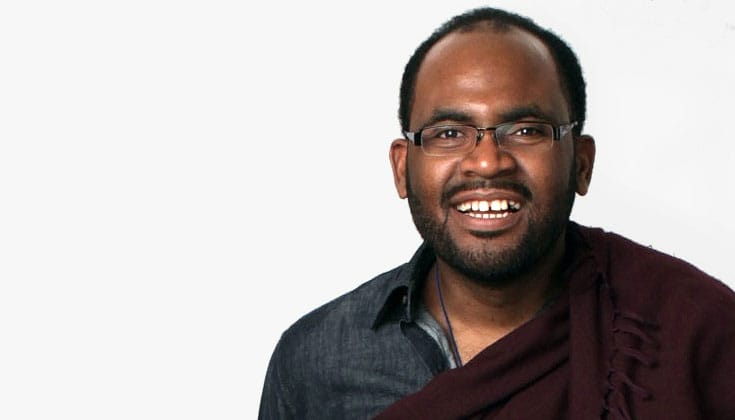 “Sanghas must not thrive off of patriarchy,” writes Lama Rod Owens. “They must undo it.” Photo by Liza Matthews.

Buddhist communities are not unlike other organized religious communities: where there is hierarchy, patriarchy, and a clergy class with weak accountability structures, abuse will thrive. Lately, many of us have to come to realize how unsafe sanghas can be for the most vulnerable among us. We must work to undo this violence, which is rooted in patriarchy.

As a male-identified member of the western Buddhist clergy class, I am questioning what my place in all this is right now. There are so many stories of violence I sometimes experience emotional fatigue attempting to hold them all. I have never been a victim of sexual misconduct — but there is potential for me to a become a perpetrator if I am not skilled and mature enough.

As a teacher, I understand the challenges of maintaining boundaries in the middle of intense interactions as students reveal intricate and emotional realities. I understand how my own emotional reality enters into this interaction, often informed by my unmet needs. Sometimes the line between appropriate and inappropriate is blurred. And while I have seen and experienced boundaries being crossed by students, I still understand that the power balance in the situation means that I am the one ultimately responsible for maintaining boundaries.

Male-identified teachers, monks, staff, authorities, and lay practitioners in Western, mixed-gendered sanghas must speak out, taking responsibility for our role in a system that perpetuates violence in subtle and insidious ways.

To start, we need to understand what patriarchy is.

To begin with, we must understand that patriarchy is a political, social, and mental system that perpetuates the myth that men should be dominant. I have moved through the world becoming slowly conscious of how my gender identity, as well as my performance of masculinity, earns me significant privileges: I am taken more seriously, expected to dominate situations, given more space to practice aggressive behavior, and, most importantly, often given the benefit of doubt.

Patriarchy conditions male-identified people, especially cisgendered men, to be in opposition to women and the female body, as well as the very idea of the feminine, as a strategy to accumulate and maintain power.

In Western sanghas, systematic patriarchy has resulted in a hierarchy where power is concentrated around authorities, including staff, coordinators, and teachers. These are often men, conditioned by this system of perceived gender superiority. In the absence of accountability or shared power, the most at-risk bodies are female bodies, or those of anyone deemed weak.

At the heart of patriarchy is a duality between power and weakness. The female body becomes a symbol of any body that is designated as weak, including queer bodies, transgender and gender expansive bodies, disabled bodies, bodies holding different beliefs, and even young bodies. In orthodox Buddhist culture, patriarchy often renders the female body as an impediment to enlightenment, a tool manipulated by the male imagination to achieve enlightenment, or an object for pleasure.

What we don’t see

In other cases, we don’t see anything and have no lens through which to discern abuse, because as men in patriarchy, we have been conditioned to see what would normally be defined as misconduct as simply “how men behave.”

Another reason male teachers do not speak out about abuse may be the hardest to consider: because, perhaps, they themselves are engaging in ethical misconduct. This highlights a larger issue, which is that men often don’t know how to disrupt abuse because our unconscious allegiance to patriarchy interrupts our conscious efforts to call out abuse. Divesting from patriarchy comes with consequences: maybe — in fact, probably — we jeopardize our access to the teacher when we hold the teacher accountable. Maybe we jeopardize our affiliation with other men who are themselves part of the system.

Yet, like white people challenging whiteness, it is men who must do the work of understanding that a significant portion of our identity is based on a toxic, patriarchal masculinity.

If we are to undo patriarchy

If we are to undo patriarchy, we must commit ourselves to learning about feminist frameworks through study and the development of mentor relationships with feminist women, queer and gender-expansive people, and other men committed to this work. From these relationships we can learn how to de-center male dominance and develop a critical consciousness of authentic gender equality in our sanghas. We must be willing to articulate the privilege of being men and male-identified, committing also to educate ourselves.

Key to this consciousness is challenging our participation and maintenance of gender binaries and how we frame fixed behaviors and expectations around the binaries of “female” and “male.” When we open to an awareness of the expansive nature of gender, we make room to challenge our own harmful gender rigidity.

What we all must do

We must believe anyone disclosing an experience of sexual misconduct, while noticing and resisting the common tendency to blame victims. If misconduct is perpetrated by a teacher, we must especially notice our unwillingness to see the wrongdoing of the teacher, and how that discredits the victim.

If you are a male layperson with authority in a sangha, commit to educating sangha members. Have dialogues and workshops. Invite facilitators and trainers in to support the sangha in doing this work. Establish ethics statements and oversight committees. Require all teachers in the sangha to agree to the sangha’s ethic statement. Do not invite other teachers with histories of misconduct that have gone unreconciled. Have ethics orientations with all visiting teachers before they interact with the sangha.

If you are a male dharma teacher

For male teachers, it is important to develop a personal ethics statement, in line with your sangha’s ethics statement, that clearly defines boundaries and how anyone experiencing misconduct from you can seek help.

Teachers should also refrain from teaching at centers under the supervision of teachers or sangha authorities with histories of unaddressed misconduct.

Teachers should also create diverse peer groups that offer feedback. These groups should include all gendered teachers who understand not just being a practitioner but also a teacher.

Teachers also need to publicly affirm their boundaries and offer teachings that help practitioners understand the violence of ethical misconduct. If you are a teacher who has been the perpetrator of any kind of misconduct, what (if any) has been your work to reconcile this? Peer groups can offer us support to begin the process of reconciling that can only begin with taking responsibility for the harm we have caused while helping to support us as we partner with our sanghas to begin the process of healing.

Teachers can also commit to intentionally team-teaching with teachers who represent a demographic underrepresented in the sangha. This helps uncover biases in your teaching.

Sometimes there are misconducts that arise out of misunderstandings. It is critical that teachers have structures in sanghas in place to mediate and foster communication and clarification in such situations.

I have found it clarifying to articulate my commitments as a male-identified teacher working to undo patriarchy. These commitments include:

I have a vision of western sanghas that are deeply engaged in the project of cultivating true, inclusive spaces where oppressions are directly interrogated.

Sanghas must not thrive off of patriarchy. They must undo it.

That won’t happen until there is a widespread divestment in patriarchy and a complete interrogation of the ethics of power. We all have work to do.