Robert Thurman’s commentary on the Tibetan plight and the horrifying phenomenon of Tibetans self-immolating in protest of Chinese rule.

Oh my heart! Oh, my life! How can this happen! What can I do? I’m overwhelmed as I watch a video of the brave and passionate Tibetan Buddhist nun Palden Choetso standing in the street, burning herself as a human torch. I want to respond, to douse her flames. It’s impossible. So too is it to salute her for her bravery, for her faith in love, for her determination, and her belief that peace is possible. Did she cry out for freedom? For herself? Her people? Her land? Her nation? For her beloved lama, teacher, and savior? 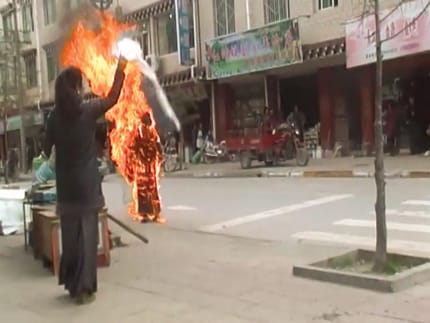 I watch as an elegant laywoman, a passerby startled and gripped with horror, manages to quickly take a white khata greeting scarf out of her bag, a traditional offering of goodwill and respect. She waves the scarf toward the stock-still flaming nun and then offers it into the fire as Palden Choetso passes out, dying in agony, her body crumpling to the ground. I also offer a khata from my heart.

In a gathering we held at Roosevelt House in New York, in a hall adorned with the words of Franklin D. Roosevelt’s Four Freedoms and a picture of FDR, Churchill, and Stalin at Yalta (where once again they ignored the fate of Tibet), Kirti Rinpoche, exiled abbot of one of the monasteries where some of these brave monks and nuns who have selfimmolated came from, declares: “This is an ultimate act of nonviolence!” I am not sure at first, and surprised, as all evening he had been deploring that this is happening, as we all do. If any young monk or nun were to ask their abbot or their lama, His Holiness the Dalai Lama, “Should I offer myself for freedom?”— the answer would be an emphatic “No! Absolutely not! Endure the oppression and turn your mind toward practice to attain the ultimate freedom of nirvana and buddhahood for the sake of all beings!” But once they do commit such sacrifice, one cannot help but respect their courage.

When you destroy your body, you violate your own life, the lives of what Buddhists call “the 84,000 cells” that constitute it. This does seem violent. Yet in this case, the individual sacrifices herself to appeal to her enemy, to convey the perhaps all-too-subliminal message that they have nothing to fear from her, that she will resist their relationship of fear and harm by removing herself from being the target of their ultimately self-destructive, evil behavior. That is true non-harming—perfect resistance by complete surrender. If your victim prevents you from harming her by harming herself and taking herself out of your reach, then why were you afraid of her and wanting to harm her in the first place? Since she won’t harm you, she must love you. She wants you to stop fearing and hating; she wants you to be happy! Indeed, she cries out to you with her very life to wake up and behold the power of love—how it does not fear death, how it gives itself away to reality, how it overwhelms hatred.

His Holiness the Dalai Lama is being blamed by the Chinese Communist Party government for these dread-inspiring demonstrations of their illegitimacy in the eyes of the Tibetan people, if not in the eyes of the hypocritical world of diplomacy and commerce that favors the rich and powerful winner of whatever illegal action, even the theft of a country. Such blame is totally unfair. I still remember His Holiness’ reaction to the selfsacrifice of Thubten Ngodup in Delhi, whom he was able to visit in the hospital before he died. His Holiness was very upset by it, and Thubten Ngodup was elderly, not young and brilliant with a whole life of study and achievement ahead of him. His Holiness said, “This is violence, even if it is self-inflicted. The same energy that can cause someone to do this to himself is very close to the energy that enables someone to kill others in fury and outrage.” His Holiness was also worried about this powerful gesture. But he was pleased that at least he was able to whisper into the ear of the totally bandaged victim, “Do not pass over with hatred for the Chinese in your heart. You are brave and you made your statement, but let not your motive be hatred.” Thubten Ngodup somehow signalled that he understood, to His Holiness’ great relief.

One of the brave monks who set himself on fire did so in the close presence of Chinese military police, who were so confused by this astonishing gesture, they shot him and then proceded to beat him as he was dying, as if to punish him for freeing himself from their punishments! It was a sign of their utter confusion. They could not understand the power of his act to completely cancel the conflict of oppressor and victim, nor his wish to take control of his own life by giving it away.

Buddha said that hate will never put an end to hate—only love can. Hate wants to destroy its object, a person seen as obstructing the hater’s happiness; but love wants even a hating person to be happy, not to be any sort of obstruction—that’s how it can overcome the hate.

The numbers of young monks and nuns burning themselves in a final appeal for a change in the iron hearts of their oppressors strikes straight to the heart of our whole world.

I think of the Buddha Dipamkara, Buddha the Lamp-maker, who offered his body as a lamp for the wise and loving enlightened beings who strive ceaselessly to bring beings out of the fires of hell and other nether realms, and humans out of the tragedies of death, famine, plague, and war. Oh please Father Chenrezig and Mother Drolma, reach out to these young souls as they leave their bodies behind in writhing agony and guide them to havens of healing and a further life of ideal circumstances for spiritual advancement! Oh all you savior deities and protecting angels, go to the cruel despots in their dreams if necessary, and help them face reality, heed the power of truth, let go of their paranoid fantasies of making eternal their deadly suppression of freedom everywhere!