In a seemingly divided America, political “centrism” is gaining popularity. But, from a Buddhist perspective, Buddhist teacher Ethan Nichtern argues, centrism is actually a kind of extreme. 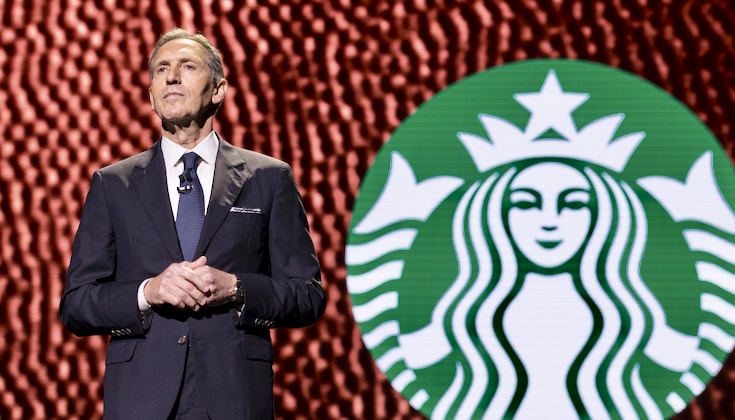 Howard Schultz, the former CEO of Starbucks, revealed last week that he is considering a run for president as an “independent centrist.” Photo by Stephen Brashear / Getty.

There is something very problematic about the use of the term “center” in American politics, especially from a Buddhist perspective. This problem was revealed in all its ugly splendor this week with conservative billionaire Howard Schultz’s attack on progressive views and the news that he is considering a run for President of the United States as an “independent centrist.” In our culture, we have a political misunderstanding of the meaning of the word “center,” which is related to a misunderstanding of the Buddhist notion of the “middle way.”

The middle way is a huge part of Buddhist philosophy and psychology, but it doesn’t refer to some random center point. Upon investigation, Howard Schultz — the former CEO of Starbucks — seems to be ideologically and socially located somewhere between Donald Trump and Michael Bloomberg. That’s not anywhere near the “center” of our larger social discourse. When you identify the midpoint between two locations on a map, it doesn’t mean you’ve found the equator. Similarly, without clear context, the term “centrist” tells us nothing of value.

The way we use the words “center,” “left,” and “right” in politics today does not make sense.

In Buddhism, the middle way describes our tendency to bounce between extreme ways of relating to the present moment. For example, a painful emotion arises and you either fixate or reject it completely. Both approaches lead to further confusion and suffering. Alternatively, in any situation, when we identify our various extreme responses, we can practice letting go of them to make room for the natural uncertainty that arises. In resting with the uncertainty that comes from letting go of equally problematic extremes, some natural clarity begins to come to us about how to proceed. That’s the middle way.

But here’s the obvious thing about American politics: progressives and conservatives do not, in any way, constitute equal and opposite confused and harmful approaches.

For one thing, progressive policies are demonstrably more fact-based than those of conservatives. Meanwhile, much of our media portrays the two political parties like rival sports teams. But have you ever watched a sporting event where one team wins and promptly gives the losing team better healthcare? Politics is not a zero-sum game where one team wins at the other’s expense.

Classic conservative values, taken at their word, have some helpful aspects. Personal responsibility is a great value, for instance. But, under Mitch McConnell and Donald Trump, the modern GOP has become a machine of white supremacy, misogyny, and climate destruction. When a conservative white male billionaire says he’s running as a “centrist,” we should ask what that really means. Is he halfway into white supremacy, misogyny, and environmental destruction? This so-called “centrism” often comes with an image of diplomatic reasonableness — or even spiritual equanimity. This is pseudo-dharma at its most toxic.

A much more awake definition of “centrist” in a democracy would be someone who holds the political and ethical beliefs that are shared by the majority. It’s clear that someone like Congressmember Alexandria Ocasio-Cortez, or others among the new progressives, is a true “centrist” in this era. Their policy proposals — such as a gradual tax on the ultra-wealthy, a Green New Deal, Medicare for all, and protections for marginalized people and immigrants — map much more closely onto what the majority of citizens say they want. Rather than making targeted appeals to polarized voter groups, they seek true common ground.