Rita Gross explains why it is important for our practice to understand the history of Buddhist movements. 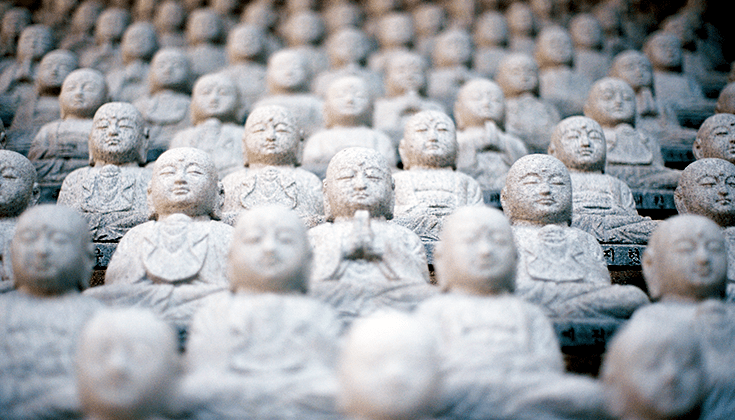 Western convert Buddhists may know a few “family” legends unique to the particular type of Buddhism they practice, but many lack systematic training in the history of their newly chosen religious path. Many do not understand how their chosen lineage fits into the larger picture of Buddhism, an old, far-flung religion with many regional and historical variations. Each of the myriad Buddhist subgroups has its own story about how, when, and where Buddha gave the teachings on which its view and practices are based. These stories make claims that are difficult to reconcile with one another. Making sense of these stories can be difficult unless one has tools with which to understand the relevance of legend and myth.

The Dalai Lama has argued for years that Buddhism and modern science are compatible and that if science could definitely disprove some traditional Buddhist assertion, Buddhism would have to accommodate the new information. I would make the same arguments regarding modern historical knowledge. In its traditional literature, no form of Buddhism possesses a complete account of Buddhism’s entire historical development and its various cultural and sectarian permutations. This means that without some input from modern historical studies, no form of Buddhism can provide accurate historical knowledge for its practitioners.

All forms of Buddhism can welcome historical study as relevant and useful. Buddhist teachings have always told us that impermanence is a great, unalterable fact of our experience and that it is crucial for us to become comfortable with that fact. History is simply the study of how things change and develop, which is to say that history studies changing institutions and ideas. History studies impermanence, including the impermanent characteristic of Buddhist institutions, practices, philosophical systems, and sacred narratives.

Some practitioners claim that historical knowledge is irrelevant to them because they only want to meditate. But without knowledge of Buddhism’s rich and diverse history, practitioners and communities are vulnerable to fundamentalism and sectarianism. They assume that sacred narratives and legends are composed of historical facts and that the familiar stories found in their specific Buddhist tradition should be taken literally. Those accounts often contain a sectarian edge. They claim special relevance—based on tales of miraculous accomplishments—for the texts and teachers associated with a specific Buddhist tradition. While asserting superiority for their favorite form of Buddhism, these tales denigrate other forms of Buddhism.

For example, some versions of Mahayana Buddhism tell stories claiming that the historical Buddha himself taught Mahayana and even Vajrayana Buddhism to selected superior students. Those teachings were purported to have been hidden for centuries, after which they came to light amid claims that they represented superior teachings of the Buddha. Buddhist lineages that did not accept these stories were dismissed by some Mahayanists as incomplete and inferior. Mahayana polemicists gave those Buddhists the derogatory name “hinayana,” which can be translated as “the inferior way.” Unfortunately, this term is still widely used by some Buddhists, despite its sectarian origins and negative meaning. In fact, when I have taught the history of Buddhism at dharma centers, some practitioners have been quite disturbed, both by my suggestion that the term “hinayana” is not appropriate in the context of pluralistic Buddhism and by the probability that the historical Buddha did not teach Mahayana or Vajrayana during his lifetime.

When sacred narrative and history are each taken at face value, they seem to be at odds with each other. Historical knowledge challenges the empirical accuracy of sacred narratives. A crisis of faith can result if the differences between legend and history are not understood and the relevance of each is not appreciated. If it is assumed that legends are factually accurate, then the entire basis of one’s spirituality can be endangered if it is proved that the events narrated in the sacred story did not happen in empirical space and time. However, the modern study of religions has recognized for many decades that history and sacred narrative need not be at odds with each other, because they have different functions. History is about empirical facts and figures, which may or may not be spiritually meaningful. Legends and sacred narratives provide orientation and meaning to those who follow a specific path, whether or not the events they narrate occurred in empirical space and time. A sacred narrative need not be historically accurate to convey profound meaning. Its observable truth does not determine its relevance.

The cogency of Mahayana or Vajrayana Buddhism is not damaged by the recognition that they were not taught during the Buddha’s lifetime but developed later due to various causes and conditions. When that fact is conceded, Buddhist sectarianism is also undercut. There is no reason to expect that all forms of Buddhism would go through the same historical processes or develop in the same way, which means that different forms of Buddhism need not compete with each other for relevance. It also means that different forms of Buddhism will have different sacred narratives. For Mahayanists, legendary accounts of how the Buddha taught the Mahayana explain the continuity between earlier and later streams of teaching, undercutting claims that Mahayana Buddhism was simply made up by its followers for their own convenience. For Theravadins, these same legends assure them that the earliest layers of Buddhist teachings present a complete path rather than the “inferior” path ascribed to them by Mahayana mythology.

The study of history, then, which includes the study of legends, sacred narratives, and the ways they serve Buddhist practitioners, can be helpful in lessening sectarianism and avoiding fundamentalist doctrinal squabbling. When legend and history are not confused with each other, each can take its appropriate place in an accurate understanding, both of the whole of Buddhism and of one’s preferred lineage and practice. Rather than fostering doubt, such a foundation can provide support for accurately informed confidence in the dharma.