What started as a mindful walk became a personal “disturbance of the peace.” Ray Buckner on how taking a moment to pause can transform an unsettling situation into a chance to break down barriers. 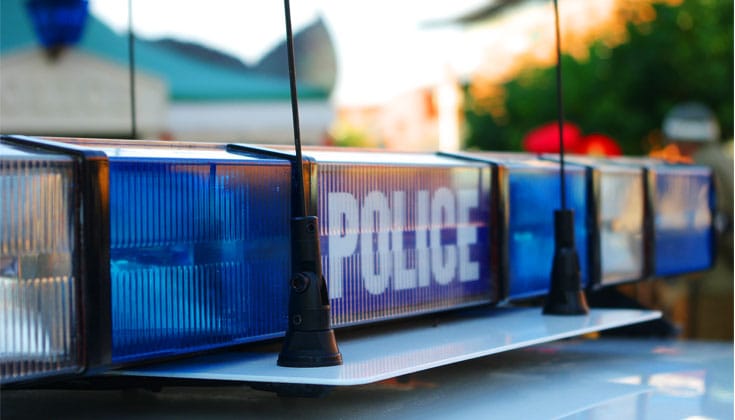 I had Pema Chödrön’s Practicing Peace in my pocket when I was stopped by a police officer.

I was out on a mindful walk in a suburb of Dallas, Texas, while visiting my friend for the holidays. With my hands behind my back, I moved slowly, taking in the Christmas lights that adorned the extravagant homes of this white, upper-class neighborhood.

My walk took me through side streets, main streets, and finally through a park, which brought peace and joy to my heart: it had a flowing stream, and a family of about thirty small black birds leapt and chirped, softly pedaling their feet in the water as I watched.

I began my slow and peaceful walk back to my friend’s home when I looked back to see a cop car. As I walked and glanced back, I noticed the car continued to follow me.

A feeling of fear arose and I became immediately aware of my body: my head was completely shaved, I was dressed in masculine attire, and I looked different from those around me. Instantly, my queer, trans body felt hyper-visible.

The officer pulled me over.  He wanted to know: where was I from and where was I going? Where was my friend, what was her address, and what was I doing in this neighborhood?

I had a very strong feeling that I was partly stopped because of my queer and trans presence.

To these questions I had my own unspoken ones. Why did you stop me? My friend had told me that people don’t tend to walk much in Dallas (compared to a city like Manhattan); was I stopped because walking, especially with slowness and intention, was viewed as suspicious? And/or, did my body itself signify “suspicious?” Stopped in a county that is known to be one of the most conservative in the area, I had a very strong feeling—a sense within my body and knowledge of systems of oppression—that I was partly stopped because of my queer and trans presence.

Anger welled up in me and I yearned to go to war with him. I wanted to go on a tirade that addressed the racism, classism, and sexism endemic to U.S. policing practices. And I found myself filling with panic and anxiety at this potentially dangerous encounter.

The Power of the Pause

It was then that I remembered Pema’s invitation and intervention to pause:

Something has stunned you, someone has just insulted you, the ground has fallen from under your feet. Before trying to get back on solid ground by following the habitual chain reaction, you can pause and breathe deeply in and breathe deeply out. Never underestimate the power of the simple pause.

I found my breath.

And I noticed something shift. As the officer asked me question after question, I began to smile. It was not that the anger went away and I was suddenly filled with joy. It was that, through the pause and the breath, I became intimately aware of my body’s lived experience:

Pema’s teaching encourages us to stay as connected as possible to ourselves and each another in times of conflict rather than form barriers that strengthen the illusion of a small and separate self. By breaking barriers and staying connected, I was able to access the interconnected, though asymmetrical, experience of suffering and oppression felt by many.

Breaking Barriers Within Myself

After the police officer stopped me, I sought to break down internal barriers by connecting with my body. I used my breath to access feelings of anger, sadness, and fear. I began with the anger roaring through my stomach because I felt I’d been discriminated against because of my queer and trans identities. I then turned my attention to the deep well of sadness around my heart, because being happy and at peace had been interrupted by bigotry. Finally, I could feel a deep sense of fear throughout my entire body, particularly around my heart and chest. I noticed a harsh, physical sensation pulsating in my lungs. It was a physiological sensation I had never experienced before. The feeling came because I thought I might die: I thought the officer might kill me.

Breaking Barriers With Other Marginalized People

Connecting with my own bodily experience was just a first step. By not erecting barriers—by refusing to become engrossed in a narrative of this encounter as “mine” and “mine alone”—I sought to connect with the pain, trauma, and fear experienced by other marginalized people.

When I sat with the fear in my own body, images quickly arose of others, and their loved ones, people who live with a fear that pulsates through their bodies every day.

I sought to visualize the transgender and gender-variant people in the South, and throughout the country, who live under frequent threat of violence. The clenching feeling in my chest also helped me relate to the lived experiences of black and Latinx people, particularly transgender women of color. As I experienced my momentary pain and fear, I considered the frequency with which people of color may experience their own fear and tightness around the chest, stomach, and heart. Finally, calling to mind my own fear of death brought to heart black families who expected their loved ones to come home, only to learn they were stopped and killed by police officers (some even living with the further trauma of witnessing these killings in person).

Not erecting barriers helped strengthen the feeling of interconnection between myself and other marginalized communities, and of my responsibility to contemplate and challenge racial hatred and prejudice.

While my experience elicited real sensations of fear and panic, the reality is also that I am alive. Perhaps most notably, I am alive because I am white. In many situations, my race protects me. Where I was able to offer verbal challenges to the police officer, the same from a black or Latinx person may have induced a violent reaction. In addition, while I smiled to calm myself and acknowledge an inner wisdom during the conversation, this same act by a person of color could have easily been taken as a form of mockery, and may have drawn out a more aggressive response.

Overall, not erecting barriers helped strengthen the feeling of interconnection between myself and other marginalized communities, and of my responsibility to contemplate and challenge racial hatred and prejudice.

Breaking Barriers With the Police

Finally, by not erecting barriers, I was able to connect with the police officer himself. When I breathed into my place of sorrow felt during and after the encounter, I was able to realize that the officer was acting from a place of trying to protect and bring peace and happiness to those he loves. This intention brought me both great love and sorrow. It brought me love because I sensed he cared for the people of his community and wanted to serve them well. And it brought me sorrow because his protection was based on a premise that separated “him” from “me.”

Studying Buddhism has taught me that many forms of protection often fail to bring about true peace and happiness for they are built on foundations of exclusion. Simply, a person (or class of people) clutch on to those sensations which feel “good” and “positive” and go to war with those sensations that feel “difficult” and “threatening.” This protection thus causes great suffering, for it cultivates a hardened, closed, and disconnected heart.

According to Pema, when you are able to take an all-encompassing, inclusive, loving view of reality, “You begin to see things in a different way. You begin to have the clarity to see injustice happening, but you can also see that injustice, by its very definition, is harming everybody involved.”

By softening and opening to what was in my heart and body, I could strengthen my heart connection between me and all suffering beings. With this feeling of love and compassion at heart, I now feel a greater resolve to transform the suffering of our society, and to fight for a kinder, softer, less oppressive, and more interconnected world.