Khandha as defined by Ajahn Punnadhammo, an abbot of the Theravada tradition. 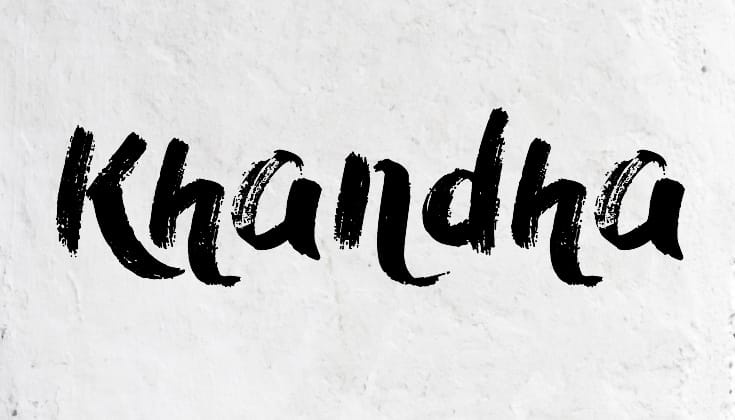 The word khandha is the Pali equivalent of the Sanskrit skandha, and their meanings are identical. Like many Pali (and Sanskrit) words, khandha has both a simple and a technical meaning, and both usages are found in the texts. The simple, or root, meaning of khandha as given in the Pali-English Dictionary is “mass, bulk, (gross) substance.” This usage is used in the canon to refer to the bulk of an elephant, for instance. The word is also used specifically for a man’s shoulders or back, and also for the trunk of a tree.

Used in a more technical sense, khandha refers to various aggregated collections. There is the phrase dukkhakhandha, “this whole mass of suffering,” referring to samsaric existence. The principal technical usage of khandha, however, is in reference to the five khandhas as constituents of psychophysical existence. Sentient beings such as humans, animals, and devas are said to be composed of five khandhas—one physical and four mental. This is a formula often repeated in the suttas and may be considered as the most basic Buddhist analysis of what constitutes a conscious being.

The five khandhas are body (rupakkhandha), feeling (vedanakkhandha), perception (sayyakkhandha), mental formations (sankharakkhandha), and consciousness (viyyaakkhandha). Each of the five can itself be analyzed into finer constituents. Thus the body is composed of the four great elements: earth, air, fire, and water (these terms are to be taken as analogs for physical qualities rather than as literally referring to those substances). Feeling is pleasant, unpleasant, or neutral. Perception has manifold constituents, depending on the sense door a given perception is associated with, as well as the habitual or learned aspects that color it. Mental formations refer to all those processes or qualities that arise concomitant with consciousness, such as cognitive thought, emotion, volition, and so forth. (The Abhidhamma gives a list of fifty sankhara.) Consciousness can be classified in various ways, but in the suttas it is most often divided into six parts according to the sense door through which the object is cognized (the five physical senses plus the mind-sense, the object of which is thought).

The most important use of the five khandhas as a teaching device is to illustrate the doctrine of anatta (not-self). The idea is that when one looks within, only the five khandhas are seen, and no self-essence is found among them. In the Samanupassana Sutta of the Samyutta Nikaya collection of suttas, the Buddha enumerates twenty ways in which beings imagine a self by misapprehending the khandhas: “He assumes body to be the self, or the self as possessing body, or the body in the self, or the self in the body,” and so on, for each of the other khandhas.

Elsewhere, the Buddha gives evocative similes to illustrate the ephemeral nature of the five khandhas: the body is like a lump of sea-foam, feelings like bubbles, perception like a mirage, mental formations like a plantain stem (i.e., hollow), and consciousness like a conjuring trick.

Another crucial use of the khandha concept occurs in the formula for the First Noble Truth, which begins with “Birth is suffering, death is suffering” and ends with “in short, these five aggregates of clinging (upadanakkhandha) are suffering.” This establishes the universality of dukkha, since no samsaric experience is outside the five khandhas.

The standard English translation of khandha, “aggregate,” is a fairly literal choice, but as so often with English translations of Pali technical terms, it does include some misleading connotations. An aggregate implies a collection of smaller or simpler units. This works very well for body and mental formations, but as Nyanatiloka Mahathera notes in his Buddhist Dictionary: Manual of Buddhist Terms and Doctrines, the other khandhas (feeling, perception and consciousness), although having manifold types, are only experienced in each moment as a unitary phenomenon. Thus, for feeling, at any given mind-moment one can experience only pleasant, unpleasant, or neutral feeling, and never two or three together.

The five khandhas schema is ubiquitous in the Sutta Pitaka but is not found as such in the Abhidhamma, where the body-mind is first analyzed into four broad categories: rupa (body), citta (mind or consciousness), cetasika (mental concomitants, which include the remaining three mental khandhas), and nibbana (the unconditioned). Thai forest masters, following Ajahn Mun, sometimes use the term citta (or jit in Thai, literally “heart”) to refer to something that is separate from—and needing to be freed from—the five khandhas. This usage is difficult to reconcile with the orthodox interpretation of the term found in the Abhidhamma. Perhaps, if one allows for poetic license, the term citta as used by the forest masters could refer to the unconditioned element, nibbana—that which is indeed beyond the khandhas.

Ajahn Punnadhammo is abbot of the Arrow River Forest Hermitage in northern Ontario.