Kokoro as defined by Shohaku Okumura, a Soto Zen priest. 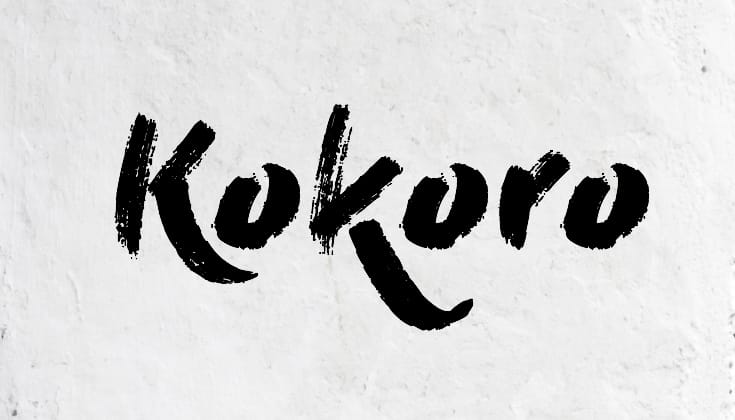 When I moved to Minneapolis from Japan in 1993 to teach at the Minnesota Zen Meditation Center, my daughter Yoko was five years old. She went to kindergarten and then elementary school there. And while she learned English at school, at home we tried to talk in Japanese. One time, when she was seven or eight, we were talking about the Japanese word kokoro. I pointed to my heart as we usually do in Japan to show where kokoro is. She pointed to her head and said, “Kokoro is here.” I was amazed to discover that she was already translating the Japanese word kokoro into the English word “mind.”

Kokoro is a common Japanese word that carries meanings conveyed by the English words “mind” and “heart.” It is used as an equivalent of the Chinese word xin and covers almost the same range of meanings. The Japanese use Chinese characters to write Japanese, and have also studied Chinese literature as an essential part of both secular and Buddhist education for more than 1,500 years, which has led to a convergence of meaning between Chinese and Japanese for many classical words.

The Chinese ideogram for xin depicts the shape of the heart—the actual organ in the human body. Since ancient Chinese people thought the heart was where psychological function took place, the character conveyed a range of meanings including the heart organ, heart generally, mind, feeling, intention, center, and core.

The entry for kokoro in a dictionary of classic Japanese words communicates similar notions:

Originally, kokoro referred to the beat of the heart, which was considered to be the essential organ of life and the source of all activities. By extension, kokoro refers to all human activities affecting the outside world through intention, emotion, and intellect.

The Chinese xin has an important spiritual and philosophical history, since it was used in Chinese translations of Buddhist scriptures for such Sanskrit terms as: citta, manas, and vijnana. In the Sarvastivadin view, these three were considered to be different names for basic mind. In Yogacara, though, citta refers to the alaya, or storehouse consciousness, while manas refers to the seventh consciousness, and vijnana refers to the function of the first six consciousnesses. These three can all be translated into the catchall English word “mind.” Another Sanskrit word, hrdaya, means the heart, center, or essence. It is also rendered as xin.

So both xin and kokoro carry the physical and spatial meaning of heart, center, or essence, and the psychological meaning of mind. It is very interesting to see that Sanskrit and English have completely different words to point to heart or mind and have no word that combines both meanings. The fact that they are both Indo-European languages may account for this shared dichotomy.

The Prajna Paramita Hrdaya Sutra is one of the most popular Mahayana sutras. In Japanese, it is called maka-Hannya-haramita-shin-gyo. The shin in the title is another rendering of the Chinese character xin, which of course carries the same dual meaning and roughly similar meaning to kokoro. But the best English translation is “Heart Sutra”, not “Mind Sutra”, because the original Sanskrit being rendered into Japanese and Chinese is hrdaya, not citta. Hrdaya, here, means that though this is a short sutra, the essence of the large six-hundred-volume Prajnaparamita Sutra is fully expressed.

There is another interesting and important usage of xin/shin/kokoro in Zen literature, as illustrated in Zen Mind, Beginner’s Mind, when Shunryu Suzuki Roshi says:

The mind which is always on your side is not just your mind, it is universal mind, always the same, not different from another’s mind. It is Zen mind. It is big, big mind. This mind is whatever you see—this mind is at the same time everything.

Although Suzuki Roshi used the English word mind, to me it is clear that he is elucidating the meaning of xin as it developed from the meaning of hrdaya, not citta. Mind, or citta, cannot be both subject and object, whereas xin includes both the subject and all the objects in the entire world. Suzuki Roshi’s understanding of this principle came from Dogen Zenji’s treatise entitled Shobogenzo Sokushinzebutsu (The Mind Is Itself Buddha), where he says, “The mind that has been correctly transmitted is the one mind… and all dharmas are one mind. The mind is mountains, rivers, and the great earth; the sun, the moon, and stars.”

I don’t think either the Sanskrit citta or the English word mind conveys such a meaning, which presents us with a typical problem in translation. Uchiyama Kosho Roshi often said that the xin used in Zen is not “psychological mind,” but it is rather “life,” which includes both subject and object. In the 1970’s when I tried to explain this to an American friend, he was puzzled by the expression “psychological mind” and asked, “Is there such a thing as mind that is not psychological?” In Zen, I think we would say yes.

Kokoro (xin, shin, heart/mind) ultimately refers to the entire network of interdependent origination in which we are born, live, and die, and to which we awaken through our practice.

Shohaku Okumura was ordained as a Soto Zen priest in 1970 by the late Kosho Uchiyama Roshi. He now resides in Bloomington, Indiana, where he founded the Sanshin Zen Community.