Vipashyana as defined by Reginald A. Ray, an American Buddhist academic and teacher of Tibetan Buddhism. 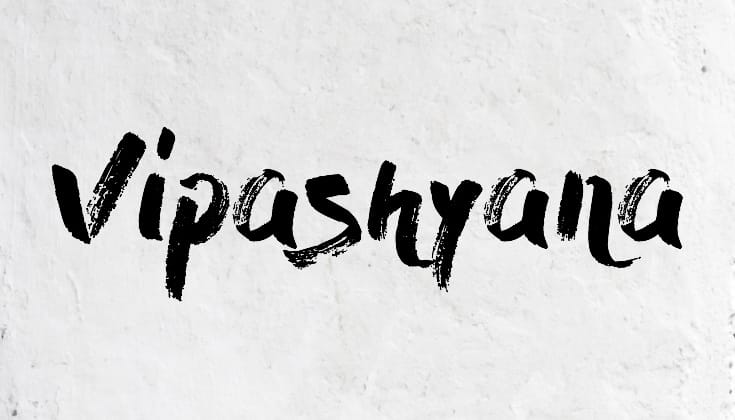 The Sanskrit Buddhist term vipashyana (Pali, vipassana; Tibetan, lhagthong; Japanese, kan), is composed of two parts: pashyana indicates “seeing” while the prefix vi- adds the meaning of “extraordinary.” Vipashyana means “to see things in an extraordinary way”—not as we think they are or want them to be but “as they truly are in and of themselves.” Vipashyana is thus the liberative insight that marks awakening and the sine qua non of enlightenment. In this sense, it is equivalent to prajna, the penetrating and immaculate experience of seeing things as they truly are (yathabhutam).

As described in traditional texts, the experience of vipashyana contains several primary features. First, it arrives suddenly and unexpectedly, cutting through whatever discursive thinking, emotion or other relative state of mind we may be going through. It comes as a surprise or even a complete shock. Second, it is an experience of something, in this case of the geography of things as they are. So the experience contains nothing of ego or its perspective. It is reality seen not from ego’s standpoint, but from the standpoint of reality itself. In this sense, the experience of vipashyana is compared to a sudden bolt of lightening that lights up the entire landscape of reality beyond our conditioned reference point. Third, the experience of vipashyana abruptly drops one into a world in which the subject-object dualism of “seer” and “seen” does not apply. As the Japanese Yogacara scholar Yoshifumi Ueda evocatively puts it, what we run into here is “reality ‘seen’ by reality.”

The various major historical schools and traditions speak in quite different ways about exactly what is seen in the liberating experience of vipashyana. The pre-Mahayana schools (Sarvastivada and Theravada) tell us that the object of vipashyana is the three marks of existence (impermanence, non-self and suffering). The Mahayana prajnaparamita describes it as seeing the utter emptiness of all relative phenomena. The classical Yogacara describes vipashyana as insight in relative phenomena as they truly are, without the least overlay of conceptual thinking. Chan and Zen speak of it as realizing “no mind.” And Tibetan Vajrayana defines vipashyana as awakening to the inseparability of appearance and emptiness, clarity and emptiness, or bliss and emptiness. It is an extraordinarily interesting and important question—and one that so far has not been addressed in a non-polemical way—to what extent the vipashyana experience described in these various renderings is the same and to what extent there are real differences.

The term vipashyana designates not only liberating insight itself, but also the practice that leads to that insight. In this sense it is typically paired with shamatha, calm abiding. While in teaching shamatha the Buddha was adapting a widespread Indian practice, with vipashyana he introduced the specifically Buddhist element into the meditation process. In the practice of shamatha, one focuses attention on a specific subject (such as the breath, the body or an image of the Buddha), thereby gradually reducing the agitation, distraction and confusion of discursive thinking. Through steady practice, the mind eventually arrives at a point of relative openness and calm. Then, within that state of peace, one seeks through the practice of vipashyana insight into the very essence and fundament of what is.

In some traditions, scholarly study, analysis and debate also play an important role in cultivating vipashyana insight. Sometimes, the path of scholarship alone is pursued in the development of vipashyana, as in the case of the study of Nagarjuna’s teachings on Madhyamaka. Here one applies a line of rigorous questioning through which the inherent fallacy of discursive thinking is gradually seen more and more clearly, leading to the non-conceptual view of reality itself (vipashyana). At other times, study is joined with meditation in a mutually provoking and reinforcing way, again leading to the insight of vipashyana.

Two examples, from opposite ends of the Buddhist historical spectrum, suggest how much difference there can be in descriptions of vipashyana, and also provide a hint of the common flavor of egolessness and blissful liberation they share.

In Theravada, vipassana is seeing clearly all phenomena of both the outer (physical) and the inner (psychological) worlds as impermanent (anicca), insubstantial (anatta) and painful (dukkha). In vipassana, one sees how anything that appears does so based on an infinitude of causes and conditions, without any real existence or identity of its own. This insight into the utterly unreliable and unsatisfactory nature of all conditioned phenomena—in other words, of samsara—marks the final abandonment of the impure and the attainment of liberation or nirvana.

According to eminent Theravada Buddhist scholar Winston King, at its higher levels vipassana is pure awareness of the unconditioned itself. Eventually, vipassana emerges into nirodhasamapatti, the attainment of cessation, in which the operation of the samsaric mind has completely fallen away. This is, in King’s words, “the fullest, most intense…experience of nirvanic bliss that can be attained in this life.”

In Tibetan Buddhism, vipashyana is described in the context of shamatha and vipashyana, the two aspects of Mahamudra practice. Through “Mahamudra shamatha,” involving both mental concentration and yogic exercises, one brings the mind to a more or less complete standstill. In the practice of Mahamudra vipashyana, one inspects more and more closely the “still mind,” the discursive mind, and external appearances. Eventually, one begins to discern that all experience resides in a state of complete liberation, is utterly pure and is immaculate awareness itself, the inseparability of emptiness and appearance or bliss.