Yogacara as defined by Charles Muller, an academic who specializes in Korean Buddhism. 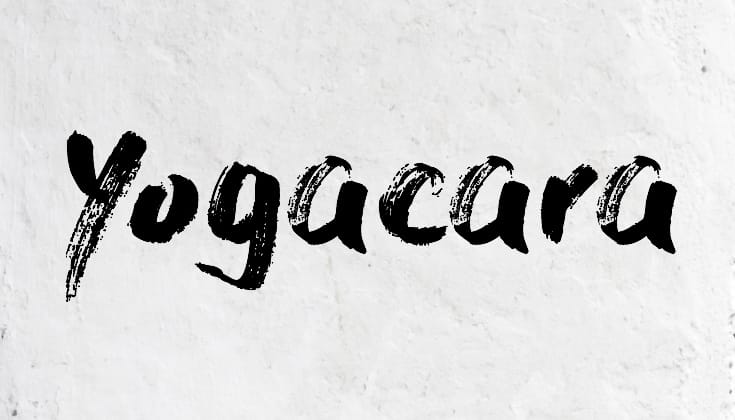 Yogacara (Sanskrit, “yoga practice”) is an influential school of philosophy and psychology that developed in Indian Mahayana Buddhism starting sometime in the fifth century C.E. Originating around a set of scriptures and treatises composed by early masters such as Vasubandhu and the semi-mythical Maitreyanatha, this school held a prominent position in the Indian scholastic tradition for several centuries. It was also transmitted to Tibet, where its teachings became an integral part of much of Tibetan Buddhism up to modern times, and to East Asia, where it was studied intensively for several centuries.

It eventually died out as a distinct school in East Asia, along with other scholastic traditions. One reason for this was the evaporation of the state patronage essential to the survival of scholastic traditions like Yogacara. Another was the overwhelming competition from more readily understandable, practice-oriented traditions like Ch’an (Zen) and Pure Land. But even though it would eventually die out as a distinct school, Yogacara brought a deep and lasting influence on the basic technical vocabulary of all forms of Buddhism that developed in Tibet and East Asia. It was the Yogacarins who took it upon themselves to provide a detailed analysis of the functions of consciousness, as well as the effects that Buddhist practices such as morality, concentration and wisdom have on the consciousness, and how those effects bring one to the Buddhist goal of enlightenment.

The Yogacara texts cover a vast array of topics, but one of their main concerns is explaining how it is possible for human beings to perceive the world, and then to agree on what they perceive. This kind of problem is especially important in a religious system like Buddhism, where the doctrine of emptiness effectively denies the reality of any set position of awareness.

The Yogacarins defined three basic modes by which we perceive our world: one, through attached and erroneous discrimination, wherein things are incorrectly apprehended based on preconceptions; two, through the correct understanding of the dependently originated nature of things; and three, by apprehending things as they are in themselves, uninfluenced by any conceptualization at all. These are referred to in Yogacara as the three natures of perception. Also, regarding perception, the Yogacarins emphasized that our everyday understanding of the existence of external objects is problematic, since in order to perceive any object (and thus, for all practical purposes for the object to “exist”), there must be a sensory organ as well as a correlative type of consciousness to allow the process of cognition to occur.

Perhaps the best known teaching of the Yogacara system is the eight layers of consciousness. This theory of the consciousnesses attempted to explain all the phenomena of cyclic existence, including how rebirth occurs and how karma functions on an individual basis. For example, if I carry out a good or evil act, why and how do the effects of that act not appear immediately? And if they do not appear immediately, where is this karma waiting for its opportunity to play out?

The answer given by the Yogacarins was the store consciousness, also known as the base, or eighth consciousness (Sanskrit, alaya-vijnana), which simultaneously acts as a storage place for karma and as a fertile matrix that brings karma to a state of fruition. The likeness of this process to the cultivation of plants led to the creation of the metaphor of seeds (Sanskrit, bijas) to explain the way karma is stored in the eighth consciousness. The type, quantity, quality and strength of the seeds determine where and how a sentient being will be reborn.

On the other hand, the karmic energies created in the current lifetime through repeated patterns of behavior are called habit energies (Sanskrit, vasanas). All the activities that mold our minds and bodies for better or worse—eating, drinking, talking, studying, practicing the piano or whatever—can be understood to create habit energies. And of course, my habit energies can penetrate the consciousnesses of others, and vice versa—what we call “influence” in everyday language. Habit energies can become seeds, and seeds can produce new habit energies.

Virtually all schools of Mahayana Buddhism came to rely on these Yogacara explanations as they created their own doctrinal systems, even the Zen schools. For example, the important Yogacara explanation of the pervasiveness of one’s delusions through the view that all of existence is nothing but “mind-only” had an obvious influence on Zen.

That Yogacara is not yet well known among the community of Western practitioners is probably attributable to the fact that most of the initial transmission of Buddhism to the West has been directly concerned with more practice-oriented forms of Buddhism, such as Zen, Vipassana and Pure Land. Also, it is a complicated system, and there are still not really any good, accessible introductory books on the topic in Western languages. But as the Western understanding of Buddhism matures, it will be very useful for us if we can round out our theoretical understanding of Buddhism by studying a bit about Yogacara.

Charles Muller teaches Buddhism at Toyo Gakuen University in Japan, and is the chief editor of the online Digital Dictionary of Buddhism.