If one were solely to rely on what’s presented in mainstream news, one might arrive at the understandable conclusion that the only realistic way to upend intractable political oppression is through violent rebellion. Not so, says young academic superstar Erica Chenoweth, and she can prove it. 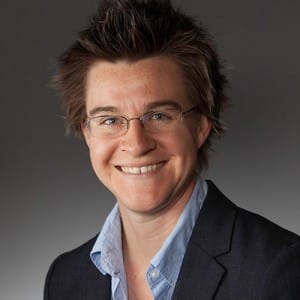 Photo courtesy of University of Denver.

For the past several years, Chenoweth has been racking up honors, and sought out for advice at the highest diplomatic levels, for championing the effectiveness of peaceful social uprisings (see her recent TEDxBoulder talk at the end of this post). But Lion’s Roar learned that when she needs to pacify inner turmoil and summon equanimity and loving-kindness in her personal and professional life, Chenoweth has been turning to Buddhist meditation. She has recently completed the introductory course offered by Dzigar Kongtrul Rinpoche’s Mangala Shri Bhuti organization, “Self-reflection and Shamatha (calm abiding meditation),” and has explored techniques such as tonglen (“sending and receiving”), the results of which, she says, “amazed me.” We asked Chenoweth about her experience with meditation, and have shared her responses after this short introduction.

Age 34, Erica Chenoweth, PhD, associate professor at the University of Denver’s Josef Korbel School of International Studies, was just named one of the 100 “leading global thinkers” by Foreign Policy magazine in its “Healers” category. Why? “For proving Gandhi right,” they said. Through groundbreaking research into more than a century of uprisings around the world, Chenoweth demonstrated that peaceful resistance movements have been much more effective at achieving their political and social aims than violent ones. The book she co-authored on the subject with the U.S. State Department’s Maria J. Stephan in 2011, Why Civil Resistance Works: The Strategic Logic of Non-Violent Conflict, earned them the 2012 Woodrow Wilson Foundation Award, “given annually for the best book on government, politics, or international affairs.” They were further honored this year with the prestigious University of Louisville Grawemeyer Award for Ideas Improving World Order.

I know that when I take time every day—even a few minutes—to sit and focus my mind on a concept like love, joy, grace, humility, or thankfulness, I experience a lot more calmness throughout the day.

With Chenoweth’s ideas penetrating further, she’s found they’re “surprisingly very controversial” (see video of her TEDxBoulder talk explaining why at the end of this post). As such, they have not only drawn counter-argument, but very personal attacks as well. That, and an unspecified traumatic incident in 2010, led Chenoweth to seek Buddhist meditation as an antidote for the intense fear and defensive anger she was experiencing. Replying to our email asking what she discovered, Chenoweth described her experience more fully:

“I am drawn to explore Buddhist meditation for a couple of reasons.

“First, as the visibility of my research has increased, so has public criticism of it. What I mean is: the subject of my work is surprisingly very controversial, and many people express skepticism and even anger at the findings. Much of the time people express honest doubts, legitimate questions about the research design or policy implications, and things like that. But sometimes the response is much angrier. Some people see the argument as immoral because it suggests that people facing down unimaginable violence would be more effective in confronting that oppression by remaining nonviolent. Some people find this greatly offensive, imperialist, and even sinister, and I have been directly accused of minimizing peoples’ suffering, being blind to oppression, or promoting dangerously naïve ideas. Other times I’m the target of threatening mail and email, anonymous bullying on the web, attacks on my appearance, gender, or moral character, and the like. I think for even the thickest-skinned individuals, constant feedback like this can really get your head spinning! But here’s the thing. I’ve found that when I become angry, self-pitying, or obsessive about how to respond, it really distracts me from my work, my life, and the people I care about. It robs me of the ability to be present—and that’s not good for me or anyone else. Meditation is like a breath of fresh air. Although I am a novice meditator (and pretty undisciplined at that!), I know that when I take time every day—even a few minutes—to sit and focus my mind on a concept like love, joy, grace, humility, or thankfulness, I experience a lot more calmness throughout the day. I find that it minimizes the storminess in my mind, removes the impulse to retaliate, helps me to be less self-centered and afraid, and allows me to resist the temptation to take unkind attacks personally. I become able to see that it’s not all about me after all!

“Second, a friend introduced me to tonglen meditation when I was having trouble resolving some trauma from an incident I had experienced back in 2010. At times, the pain from this incident was so deep—and the fear so incapacitating—that I thought my life would never be the same. With some help from therapy and some spiritual guidance, in 2012 I had a breakthrough. I realized that the only way to become free of the pain and fear was to learn to forgive the aggressors—and even to love them. This didn’t mean I had to approve of what had happened—it just meant that the next step in my personal growth was to learn to have unconditional, unilateral compassion for others. I was surprised by my capacity to do this, actually, and by the deep well of love, freedom, and power I found within myself as a result. When I realized that I was fully capable of loving and forgiving others, I also sensed that this breakthrough might be fleeting if I did not channel it into a meaningful practice that could sustain and strengthen it. My friend suggested tonglen meditation as a way to further develop the capacity to experience compassion, even during periods of intense conflict. The results amazed me. I practiced tonglen—however imperfectly—a couple of times in day-to-day interactions, and I saw tensions diffuse almost immediately. I also found that it gave me a way to activate compassion and forgiveness in a way that made my fear, self-centeredness, and anger literally evaporate on the spot.

“With guidance and accountability through the meditation class, I hope I can integrate meditation into my life in a more routine way—to make it more of a discipline than a tool. As I mentioned, I am just a beginner, but I feel that I have tapped into a source of nourishment and power that has unimaginable potential. I am eager to learn more about meditation to cultivate this inner peace so that I can be more effective in carrying a message of peace in the world as well.”

Here is Erica Chenoweth’s talk given at TEDxBoulder earlier this year on “The Success of Non-Violent Civil Resistance”:

Read more about and from Erica Chenoweth at her website, and her blog, Rational Insurgent.