Caves at Dunhuang, China, along what was once known as the Silk Road, where some of the earliest surviving Tibetan Zen manuscripts have been found. Photo by Mick Roessler, Corbis.

The phrase “Tibetan Zen”—the title of scholar Sam van Schaik’s new book—may initially startle the casual reader. The idea of Zen in Tibet is clearly announcing some news about Tibetan Buddhism that most readers have not heard before.

The book, a collection of short translations with introductory essays, is based on van Schaik’s extensive study of rare ninth- and tenth-century Tibetan manuscripts from the famous Central Asian Buddhist cave shrines at Dunhuang, an ancient oasis town along what is often referred to as the Silk Road. These early Tibetan Dunhuang manuscripts, forgotten for over a thousand years and only rediscovered in the early twentieth century, offer a window into the existence of a Tibetan “Zen” tradition that has been virtually unknown to scholars, whether Tibetan, European, or Chinese.

Van Schaik explains at the outset that he has made a strategic choice to use the Japanese term “Zen” for what he calls a “family of traditions in Chinese, Tibetan, Japanese, Korean, and other languages.” Chan in Chinese, Son in Korean, and Zen in Japanese—all these terms are pronunciations of the Sanskrit term dhyana, or meditation. Tibetans for their part use the term samten, which is a translation of the Sanskrit word for meditation rather than a transliteration. Chan, Zen, Son, Samten are linked not only by terminology but also by some (though not all) aspects of practice, as well as by their overlapping accounts of lineage genealogy and transregional transmission. Nevertheless, these traditions each evolved in distinctive, though often mutually recognizable, ways.

Interestingly, Tibetan Zen covers practices, texts, and ideas that are in some cases dramatically unlike what we often associate with either Zen or Tibet. The most surprising of these are combinations of Zen and tantra. Both Tibetan and Chinese Chan Buddhist teachers at Dunhuang show up in the manuscripts teaching a range of methods explicitly linking Zen meditation to tantric sadhana practice. For instance, the Zen meditation techniques known as “observing the mind” (techniques that were very popular at Dunhuang) were apparently used as part of tantric practice. In a related vein, some of the texts van Schaik translates here suggest that “the ordination platform used in Zen rituals could be regarded as a physical representation of the tantric mandala.” Perhaps not coincidentally, van Schaik points to frequent exhortations to secrecy for Zen found in these materials. We may not think of Zen as a set of secret instructions, but in the Dunhuang lineages, Zen teachings, like tantric practices, could be considered special and esoteric.

Van Schaik emphasizes that he doesn’t want to call the interplay between Zen and tantra in the Dunhuang period “syncretism,” which he says would imply that Zen and tantra were understood at that time as two separate things. He argues instead that the Dunhuang manuscripts reveal an older Buddhist world, now strange to us. In this older world of practice and transmission, “the firm distinctions imposed by the later traditions” did not yet exist; the meanings of terms like “Zen” were still being defined.

For those readers who have wondered about some of the possible links or historical interactions in Tibet between Zen-style meditation, Dzogchen meditation, and tantric practice, the book offers tantalizing new clues and possibilities, although it opens up many more questions than it answers. Van Schaik ends the volume with a translation of a lovely passage describing what are said to be the two kinds of teachers, one emphasizing tantra, one Zen. The first type is the master who teaches atiyoga, which in the Dunhuang manuscripts is a synonym for Dzogchen, or Great Perfection practice. He or she is like “A great garuda who cuts through the sky yet is aware of all living beings, clarifying the vehicles individually, yet cutting through space.” The other type is the master who teaches Zen (here referred to as “the master who teaches the sutras”). This master is “Like the kind of the geese who never hurries, he teaches the meaning of the lineage of masters, showing directly the practical application of the words… Understanding the hidden secret is the quality of such a master.” Van Schaik interprets this passage, in which the two styles of teacher are side by side, as evidence that the tantric and Zen teachings were seen as complementary and that both roles could even be assumed by a single teacher, depending on the audience.

The intriguing image of complementary and overlapping approaches to Zen and tantra in the early Tibetan Buddhist milieu of the Tibetan Empire and Tang China is echoed by van Schaik’s main introductory essay, which for many readers may be the most important and revelatory part of the book. Van Schaik urges us to rethink many of our ideas about the history of Tibetan Buddhism and Zen (or perhaps we could say dhyana traditions), together with our ideas about Tibetan intellectual history in general, especially from the crucial period of the Tibetan Empire, roughly the seventh through ninth centuries. 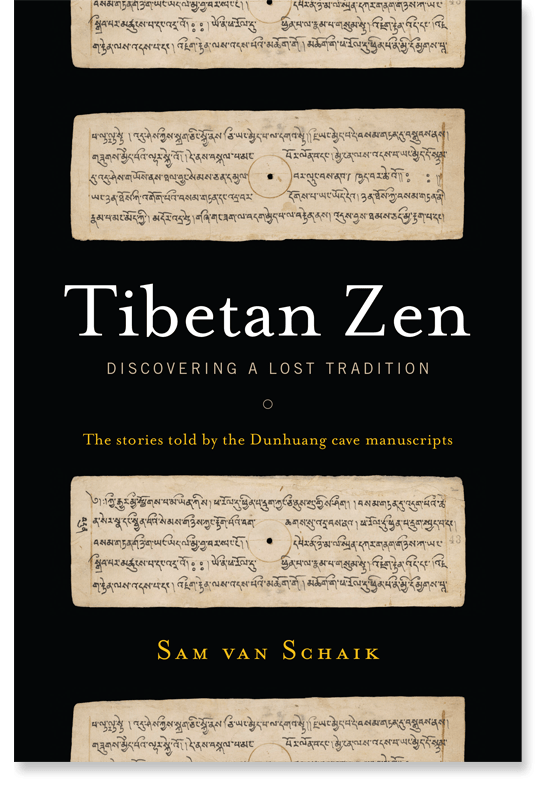 Tibetan Buddhism as we know it today was shaped in part by arguments over how best to present Buddhist teachings. Some Tibetan scholars and meditators framed their teachings in terms of a gradual path to enlightenment, an approach famous from the “Stages of the Path” or Lamrim literature associated in Tibet with the eleventh-century Bengali master Atisha, the twelfth-century founder of the Kagyu school Gampopa, and the late fourteenth- to fifteenth-century master Tsongkhapa, among many others. Other early Tibetan masters emphasized the possibility of a sudden enlightenment, a kind of breakthrough or instantaneous moment of awakening. This latter approach has often been associated with Zen or Chan. Debates over the merits of gradual versus sudden approaches to the Buddhist path raged in Tibet for centuries and came to be associated also with assertions about the legitimacy of some Buddhist lineages over others, in particular with the superiority of Indian lineages over those from China.

Van Schaik presents fascinating new perspectives on these sudden/gradual debates. He revisits the most famous Tibetan account of a Buddhist debate between Chinese and Indian Buddhist experts, over which form of Buddhism should prevail in Tibet. In the most well-known Tibetan version, an Indian monk named Kamalashila dramatically defeats a Chinese monk named Mohoyen, in the eighth century at Samye Monastery in Tibet, in front of the mighty Tibetan emperor Trisong Detsen. (One can in fact visit the very spot where this is believed to have occurred.) Kamalashila is said to have routed Mohoyen by demonstrating the superiority of the Indian presentation of a gradual path to buddhahood. After this the Chinese monk, who taught an approach of sudden enlightenment that seems to have been a form of Chan/Zen, was sent out of Tibet. This story, which appears in sources from the eleventh to twelfth century but not in earlier materials, plays an outsized role in many later influential Tibetan presentations of the Buddhist path and was often used by later Tibetan thinkers to refute the legitimacy of teachings that lacked a clear Indian pedigree.

But van Schaik explores Dunhuang manuscript evidence that tells a much less familiar story. It is also polemical, but from the other side of the debate. One text he translates, for instance, describes far more amicable and mutually respectful interactions between Chinese (and even Korean) Zen monks and the Tibetan imperial court. Zen presentations of enlightenment, meditation, and buddhahood are here said to be officially sanctioned by the Tibetan imperial court and quite popular, especially among women in the royal family. The Chinese Zen monk Mohoyen himself appears in the Dunhuang Zen manuscripts as a significant lineage figure, and the early manuscript van Schaik analyzes shows him as the victor in religious dialogues with Tibetan and Indian interlocutors. This competing narrative of Zen’s popularity in imperial Tibet is fascinating, even if this version too must be taken with a grain of salt. Also exciting is the transnational picture of eighth- and ninth-century Tibetan and Central Asian Buddhism that van Schaik paints. Readers may have had no idea, for instance, that Korean Zen monks were leading important monasteries in Sichuan, China, at this time, much less that they were also in contact with Tibetan royal circles.

The complicated international world of early Tibetan Buddhism appears from many angles in van Schaik’s collection of essays and translations. Indeed, Tibetan Zen is itself a kind of library, a sampling of the vast cave collection of Dunhuang on which the author is one of the leading experts. As van Schaik says, “It is not so easy to evoke the ritual life of a tradition that no longer exists.” Many of the lineages he describes here eventually died out in Tibet or were partially absorbed into later Tibetan schools. Yet in this volume, flashes of these lineages reveal themselves to us, providing brief glimpses of monks, meditators, soldiers, and kings in a far-off Central Asian place and time.

Annabella Pitkin is assistant professor of Buddhism and East Asian Religions at Lehigh University. She specializes in Tibetan Buddhism and Asian intellectual history.