The police killing of George Floyd, an unarmed Black man in Minneapolis, ignited protests and marches around the country supporting the Black Lives Matter movement. Fulfilling this aspiration, says Ven. Bhikkhu Bodhi, will require extensive changes both in our institutions and our ways of thought. 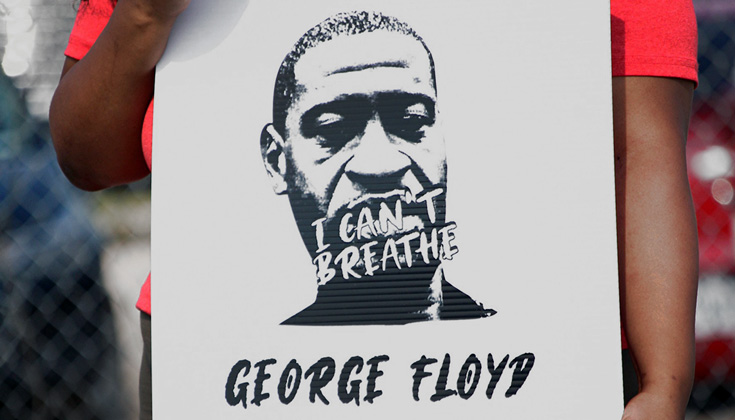 While in recent years the news media have been peppered by reports about the police killing of unarmed Black people, the Memorial Day murder of George Floyd stood out through the raw imagery that revealed the slow agony of his death. Floyd’s dying words, “I can’t breathe,” followed by his silence, left us shocked that such a naked display of cruelty could take place in broad daylight in a major American city, committed by an officer of the law. The killing set off a stream of protests in cities and towns across the U.S., and even around the world, united under the banner “Black Lives Matter.”

As a nation we presently stand at a crossroads where we can either go forward in creating a “beloved community” of mutual affirmation, or we can retreat backward into the bunkers of suspicion, resentment, and racial violence.

The murder of George Floyd came as a stark reminder that our legacy of racist violence is still very much with us. In the aftermath of the killing, Black leaders and their allies are demanding stricter laws governing police behavior. Though any effective response to these tragedies must certainly include major changes in policing practices, a movement based on the theme that “Black Lives Matter” cannot stop there but must go further and seek to stamp out all forms of violence, obvious and subtle, that debilitate the lives of Black Americans in this country.

Racism today occurs in ways that are not blatantly violent but still leave Black people stunned and gasping for air. These are often veiled behind a screen of code words that hide the real facts from our sight. They include poor provisions in health care, education, jobs, and housing, all based on the premise that Black lives don’t merit the same opportunities that white people enjoy. If we truly believe that our country stands for “liberty and justice for all,” we would reject that premise and ensure that disadvantaged Black Americans and other groups mired in poverty are provided with the critical building blocks of personal and communal well-being. These are human rights, and it is the job of the government, as representing our collective will, to see that they are made available.

We can’t fall back on the excuse that providing such benefits would bust the federal or state treasury. We spend close to a trillion dollars on the military, lavish battlefield equipment on police departments, and give whopping tax breaks to billionaires and giant corporations. If we got our priorities straight, we could easily provide everyone in this country with the basic requisites of a decent life. The real reason politicians and their constituents agonize about spending on such services is because in large measure they would benefit Black Americans and other people whose skin is a darker shade.

Among all economically advanced countries, the U.S. stands out in the paucity of the social services it offers its population, and a major factor behind these spending constraints is racism. In the name of social justice, this has to change. The social safety net, now badly frayed, must be repaired and widened, so that no one falls through the holes in times of illness, a job layoff, or old age. Those in need must be provided affordable housing, vocational training, and quality health care. The minimum wage should be boosted to the level of a real living wage, and the range of good-paying jobs expanded through the rapid adoption of a Green New Deal that simultaneously combats climate change and unemployment. We must guarantee all people access to clean drinking water and nutritious food, and make massive investments in public education at all levels, starting with pre-K.

Measures to establish social justice must be supplemented by efforts to restore political justice, especially by countering attempts by conservatives to undermine voting rights. These efforts have spread across districts with large Black populations, especially in southern states, where devious tactics are used to diminish Black turnout for elections. Instead of limiting the right to vote, we should make the process of voting as easy as possible. This will require people of conscience to stand up against the effort to distort elections through restrictive voting protocols.

While economic and social transformation is essential, to eliminate racism at its root we have to take the project down to a deeper and more personal level. The racist policies and institutions that undergird almost every aspect of life in the U.S. stem from long entrenched prejudices that ascribe a diminished value to the lives of African Americans and other people of color. How else can we explain the vast gaps in income and wealth between whites and Blacks, the hostility in Congress to food stamps and welfare, or the shorter life spans of Blacks compared to other racial groups? How else can we understand why COVID-19 fatalities among Black Americans are 2.5 times higher than among whites?

In the end, what is required to achieve a lasting resolution to racism in this country is a change in the perceptions and attitudes that allow these travesties to continue. White people in particular must make a deliberate effort to look beyond stereotypes and see every human being, regardless of skin color or ethnic origins, as endowed with inherent value and thus as worthy of care and respect. To change our perceptions, however, is no easy task. The human mind is governed by a deep tendency to objectify others and subsume them under categories that reflect our personal biases and fears, particularly the fear of difference. To objectify others is to blind ourselves to their own intrinsic reality as persons who, like ourselves, wish to avoid suffering and seek happiness, who want to live and not to die, who aspire to realize their innate potentials.

What is needed above all to eradicate racism is, as Martin Luther King, Jr. said, “an unconditional love” rooted in an understanding of our shared humanity, our shared fragility and vulnerability. Such love would give rise to genuine compassion for those who suffer and a desire to ameliorate their pain, but would also affirm our common capacity for leading lives of meaning and purpose. It would thereby unite us in a collaborative effort to create a society—and even a world—in which everyone can flourish.

Given our history of racism and current cultural norms, efforts to forge such strong bonds of solidarity will run up against both internal and external obstacles. Not only must we deal with our habitual biases and the pressures of our peers, but we will inevitably face opposition from those who benefit from division and want to preserve their privileged status, even though, in the end, such divisions diminish us all.

As a nation we presently stand at a crossroads where we can either go forward in creating a “beloved community” of mutual affirmation, or we can retreat backward into the bunkers of suspicion, resentment, and racial violence. We can come together to create a society that serves the needs of all, or we can struggle to prevail in a zero-sum game.

The unity among young people of all races and backgrounds marching along the streets of our major cities shows that the seeds of a society centered around human solidarity are blowing in the wind. The tragedy of George Floyd’s killing is starting to blossom in new flowers of hope. Our task now is to realize the potential of this moment and enhance its power until it becomes the dominant ethos of our time.