Update: Read “Being Gay, Being Buddhist,” George Takei’s keynote address at the seminar, on Lion’s Roar. 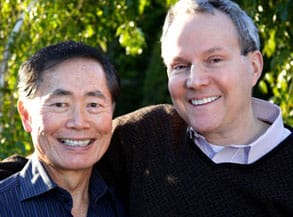 Turns out Takei has Buddhist roots and still identifies as such. He grew up attending Senshin Buddhist Temple in Southern California and as a UC Berkeley student he was known to frequent the Berkeley Buddhist Temple. Later, Takei and his partner, Brad Altman, were married by Rev. William Briones, resident minister of LA’s Hompa Hongwanji Buddhist Temple.

Even before his public “coming out” in 2005, Takei was known as a dedicated champion of LGBT rights. In recognition of these efforts, last month he was the recipient of the GLAAD Award in New York, for his role in fighting for equity in the media field. In press material for the seminar, the BCA also touted its bona fides with regard to LGBT inclusion, despite having arisen from a conservative Japanese culture that tends to value conformity:

“Beginning in 1899, the Buddhist Churches of America (BCA), comprised of sixty temples in the continental United States, has been dedicated to sharing Buddhism, particularly as taught by the founder of Jodo Shinshu Buddhism, Shinran Shonin (1173 – 1263). Shinran taught that enlightenment is accessible to all, according to the Buddha, without discrimination whatsoever. Accordingly for almost forty years, BCA ministers have been performing same-sex marriages at various temples in the continental US.  In 2004, the BCA Ministers Association passed a resolution supporting same-sex marriages; and in 2011 it passed a resolution urging the Boy Scouts of America ‘to remove all limitations of participation due to sexual orientation.’”

Other speakers at the “Being Gay, Being Buddhist” seminar will include Pieper and Lois Toyama on “Parenting our LGBTQ Children,” and Rev. Kiyonobu Kuwahara, who “will provide an overview of Buddhist, particularly Jodo Shinshu, doctrinal views relevant to the LGBTQ community.”