Reginald A. Ray argues that far from being a “lesser” practice, giving is central to all schools of Buddhism and essential to – perhaps synonymous with – the relinquishment of ego. 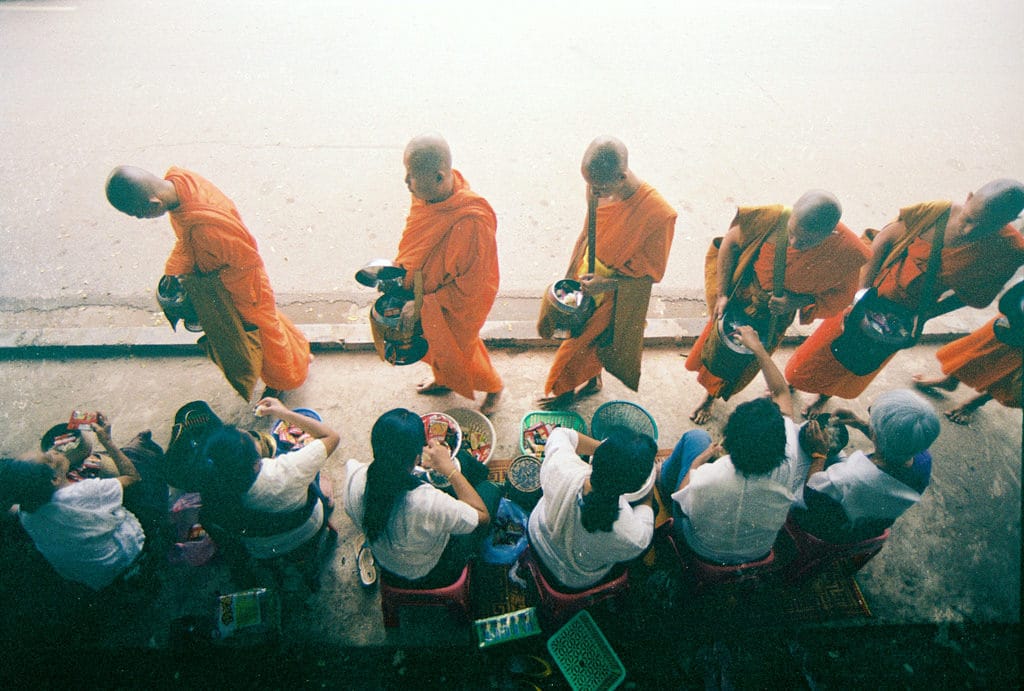 Among Buddhists in the West, the traditional practice of giving is often considered a lay virtue aimed at achieving a better rebirth in the next life. While there is nothing particularly wrong with this understanding, it has a serious drawback: giving is often assumed among more serious practitioners to be a relatively lesser practice in Buddhism, superseded by the elite forms of ethics, scholarly study and meditation. This assumption is inaccurate and has led to a unbalanced, distorted version of Buddhism, not only among scholars but also among Western practitioners.

Descriptions of the practice of giving are found, as is well-known, in the earliest Buddhist texts. Perhaps surprisingly, at least for some, the giving practices outlined there possess much depth, subtlety and sophistication, and certainly do not conform to the prevalent stereotypes of “lay Buddhism.”

In the early texts, the practice of giving articulates the way in which (usually) lay donors and their renunciant (monastic and yogic) recipients establish relationships with one another. As the texts emphasize, the renunciants make the first gesture of giving by presenting themselves to the lay person as a potential “field of merit” or “object of offering.” In practical terms, this means that on their alms rounds they turn up at the door of a home and offer their willing—and generous—availability for a relationship with the lay person living there.

The texts show us clearly that through the intimate meeting of donor and recipient, donors are able to participate in whatever realization, stage of goodness or holiness the renunciant may have attained.

Typically, the lay person responds by placing an offering of food in the bowl of the alms-seeker or by providing some other kind of needed offering, perhaps medicine or one of the other necessities prescribed for renunciants. In some cases, the giving might extend to non-material forms of offering, such as asking after the teacher’s health or uttering words of praise. Having made the offering, the lay person will typically request teachings and the renunciant will respond with a second act of generosity by fulfilling the lay person’s request. The practice of giving, then, is a deeply reciprocal practice with lay devotee and renunciant each giving what is within their means to give. Each offers not only what one has but, in the Asian understanding, as scholars such as Paul Mus and Louis Dumont have shown, what one is. The potential intimacy of this kind of reciprocity need not be doubted.

It is clear, then, that the reciprocity is not simply an exchange of food for teachings. It is not just that the renunciant needs nourishment and supplies to support their spiritual way, and that the lay devotee needs the merit produced by giving to a holy person or the teachings that are offered. From the earliest times, a renunciant’s life has been considered fully worthy only when their realization has been shared with others; and, in the reciprocity of the relationship, the lay person has been able not just to hear indirectly about the realization of the renunciant, but actually to see and taste it. The texts show us clearly that through the intimate meeting of donor and recipient, donors are able to participate in whatever realization, stage of goodness or holiness the renunciant may have attained. Countless stories in the early texts make it clear that, through this kind of intimate participation, donors might well find themselves transformed for life.

The practice of giving in the early texts is not only deeply reciprocal but universal as well, not confined to the interactions of the laity and renunciants. In fact, the practice articulates the relation of any less realized person, including the lay people, monastics and yogins, and even sometimes supernatural beings, to someone who is more realized. In the life story of the Buddha, for example, everyone wants to give to the Buddha and, in so doing, gain a glimpse of his realization, the state for which all devotees yearn. Whether it is a child offering a gift of dirt as his only possession or a deity offering celestial flowers, all seek the kind of opening that comes from giving to the awakened one.

In the early texts, the practice of giving unfolds according to a certain logic. People more realized than we are live on a different level. They do not quite speak our language and do not respond to our usual samsaric motivations or our habitual ways of communicating. We must speak to them through specific ritual forms. As in all authentic expressions of ritual, in the practice of giving we use a specialized language to communicate with them—language they will receive and to which they can respond.

What is this ritualized language and how does it work? The human ego is largely defined and maintained by our personal possessions, that which we consider “ours.” These are not only material possessions but also our abilities and even what we think. In the practice of giving, we offer up our wealth in the form of food, money or other material items, or non-material items such as expressions of devotion, praise or spiritual aspirations. When we do so, we are giving away parts of ourselves. In fact, in the moment of giving it may feel as if we are offering up our very “self.” This is why we resist giving to others, why the act of giving itself can be so painful, and also why it can be so liberating.

This giving away of “self” is precisely how we establish an authentic connection with the object of our devotion. Once we have offered up ourselves and our very being, we are temporarily in a state of openness, free from grasping and fixation. Then we can truly hear and incorporate the message of selflessness and liberation.

This same logic of giving is found at the heart of later Buddhism. In both the Mahayana and the Vajrayana, the major themes of the earlier tradition are taken as a foundation and the practice of giving is developed in some interesting directions. For example, the sevenfold offering is at the center of liturgies practiced daily. The offering to “superiors” is now expressed in offerings to the celestial awakened ones. Because these objects of generosity exist on a spiritual plane, the sevenfold offerings include material items, but emphasize the non-material: prostration; offering of pleasing shrine offerings such as flowers, incense, light and perfume water; confession of past misdeeds; rejoicing in the existence of the awakened ones; requesting them to teach; asking them to remain and not pass prematurely into nirvana, and dedicating the merit we have accumulated to the welfare of all sentient beings. Through the sevenfold offering, we open ourselves in devotion to the buddhas, making ourselves available to receive the blessings of awakening.

Generosity is thus the first and, in some ways, most important of the six paramitas: “transcendent actions” define the bodhisattva path to buddhahood.

Carrying further themes from the early tradition, the Mahayana shows in detail the spiritual efficacy—and indeed the necessity—of giving for the development of the bodhisattva. Generosity is thus the first and, in some ways, most important of the six paramitas: “transcendent actions” define the bodhisattva path to buddhahood.

As in the early tradition, the person who gives—here the bodhisattva—receives great spiritual benefit. As explained in the Mahayana, generosity is practiced toward all other sentient beings throughout time and space. We practice three types of generosity. We offer others material necessities, freedom from fear, and the gift of dharma. We practice generosity as well through the dedication of merit: whatever merit has accumulated through our practice, we give it away to all those who suffer. Through the practice of generosity, we relinquish on ever deeper levels the personal territory of the “self,” allowing the buddhanature within us to progressively emerge.

The theme of generosity as a necessity for spiritual development appears again and in a slightly different way in the Vajrayana. Here it is the very foundation of the tantric practitioner’s ritual life. In the ngöndro, the series of four or five “preliminary practices” that are repeated a hundred thousand times each, one prepares oneself to receive abhisheka, empowerment into the full Vajrayana. The entire ngöndro is nothing short of an extended practice of giving in which one gives away one’s samsaric identity in toto, becoming an empty vessel into which the elixir of the Vajrayana—the immaculate wisdom of enlightenment—can be poured.

This process reaches its culmination in the third ngöndro, the mandala offering, where one repeatedly offers up everything that one possesses—all the identifications of body, speech and mind that make up who we take ourselves to be. We offer up all our possessions and enjoyments, all our hopes and fears, in order to become truly empty. Then after the abhisheka, the practice of generosity continues in an even more intense form, repeated continually throughout any tantric liturgy that we may perform. Here, the practice is to continually make offerings to the awakened ones and to all sentient beings—in the Vajrayana our devotion, our practice and all the activities of our lives are conceived as a gigantic offering. Through this kind of giving, that which covers over our true nature is progressively stripped away, revealing the immaculate enlightenment within.

The practice of giving is thus operative in all the major schools and historical periods of Buddhism and at all levels of practice. We will have a more accurate understanding of giving if we see it not as a preliminary, primarily lay practice, but as standing close to the very heart of Buddhist spirituality. The practice of giving—whether we are offering our material wealth, our ideas and energy, our devotion and commitment, or our practice—is the one thing we can all do to make an authentic connection with the awakened ones and their energy of enlightenment. There is no way we can manipulate them to provide the dharma we so desperately need—we can only give everything away, all that we ever were, are or hope to be. When we have done so, the awakened ones are enabled—and somehow, mysteriously, do not fail—to rain down the wisdom of awakening. In ceasing to be through the practice of giving, we are able to realize who we truly are.