Their sangha gathered virtually, but it was still real. Rachel Paige King on the loss of an online dharma brother. 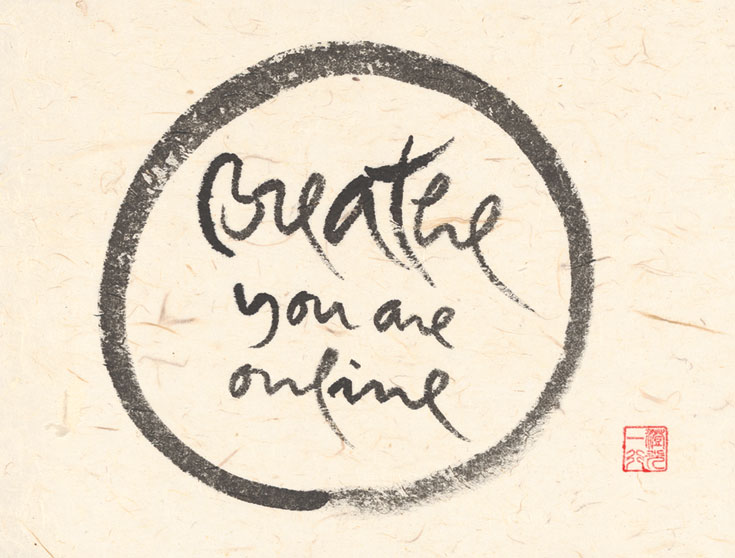 I was sitting at the cluttered desk in my home office teaching an online class on my laptop when a text from my friend Annie popped up on my phone. “Can you give me a call this morning? It’s important,” it said.

Annie was a longtime friend, and I expected to hear from her daily. For the past couple of years, she and I—and our friend Kalen—had been sending each other a text whenever we meditated. Even though we lived hundreds of miles away from each other, we were close companions. Knowing that Annie and Kalen cared about my meditation efforts helped me stick to my practice, even when I was feeling uninspired.

Seconds after I saw Annie’s text, my mind darted back to the task at hand. I was answering university students’ questions while awkwardly trying to share my screen, and feigning confidence required all of my mental energy. By the time my video conference was over, it was as if I’d never seen the text. An hour later, I received a second, more urgent one: “It’s bad news. I’ll call you.”

‘A sangha is a community of friends practicing the dharma together in order to bring about and to maintain awareness.’ —Thich Nhat Hanh

Six weeks into the coronavirus crisis, I expected bad news. I’d heard tragic stories about elderly relatives contracting the virus. Annie’s mother, I knew, was in the Boston area, which was a hot spot at the time. As it turned out, she was fine. But our friend and meditation partner, who also lived in Boston, was not.

I wanted to tell her she didn’t need to cry because what she was saying was obviously impossible. Kalen was too young to die. Like Annie and me, he was only in his fifties. More importantly, we’d all texted each other the evening before. He seemed fine.

As she spoke, I started scrolling through our shared text thread. Annie had sent Kalen and me a text at 7:54 p.m. Kalen had given it a thumbs up. I could barely focus on the details she was sharing—I was too busy trying to disprove them as she spoke. She said that Kalen’s partner had been working upstairs in their home office when Kalen, who had been downstairs, had some sort of health emergency—one that was not related to Covid-19, but which had nevertheless been fatal. She didn’t know any more than that. She hadn’t spoken to Kalen’s partner yet, only to a close mutual friend who’d told her the broad outline of what had happened.

All I could think was, no, this can’t be right; Kalen had responded to that text, so he must still be alive. But it didn’t take me long to see I was deluded. A lot of bad things can happen between 7:54 p.m. and daylight.

We called our little group “our sangha,” but we didn’t use the Buddhist name because we were such dedicated practitioners. Quite the contrary. The group was mostly social, and certainly not religious. The word “sangha” has a connotation of humble companionability, which suited us. “A sangha is a community of friends practicing the dharma together in order to bring about and to maintain awareness,” says Thich Nhat Hanh.

Kalen, Annie, and I all came from Judeo-Christian backgrounds—Protestant for him, Catholic for her, and Jewish for me. The religious groups we were familiar with were organized into “congregations” and “parishes.” For many Christians, the word “church” is a metaphor—specifically, a metonymy—in which the building where people congregate becomes synonymous with the congregation itself. And while I mean no disrespect for our ancient Judeo-Christian faith traditions, that kind of august formality is off-putting to me. Instead of congregating in a church on Sunday, Annie, Kalen, and I met online. And every one of our encounters felt meaningful and real.

Annie and Kalen had been meditating together this way for some months before they invited me to join their group in 2018. At the time, Kalen and I were acquaintances. We’d met through Annie in the early 1990s when we all lived in the Boston area. While Annie always kept me up to date on how he was—and once we even met up for a movie in Manhattan—our virtual meditating was what deepened our friendship.

When I say we weren’t the most self-disciplined practitioners, I mean it. Our meditation text thread often strayed off topic. But it made our little community stronger when we allowed our personalities and quirks to emerge. Occasionally one of us hijacked the text thread, and used it to share snapshots of our pets, acerbic political or cultural opinions, photos of urban architectural marvels, or movie stills.

One morning, Kalen texted us a photo of Old South Church, a place in Boston where he liked to meditate. This generosity was so like him—it wasn’t enough for him to enjoy the serene majesty of the church, he wanted Annie and me to be able to experience it, too. In a sillier vein, on the morning of April 15, I discovered that the star of one of Annie’s favorite movies, Once Upon a Time in the West, was turning eighty-two. So, I texted an image of the glamorous Italian actress. “Happy Birthday, Claudia Cardinale!” I wrote. April 15 seems so long ago now.

In one respect, nothing has changed since then. Annie and I still practice together. She still sends me texts letting me know she’s meditated, only now she adds Kalen’s initial to honor and include him. In that way, there are still three of us, and the sangha is unchanged.

But I’m different in so many ways, not the least of which was a sore throat I developed shortly after receiving the news. Maybe it was the deadly virus or the allergies I always suffer from in the spring and summer, but I don’t think so. What I think I had lodged in my throat was grief, a sadness too painful to swallow. Every day I read news reports about promising new Covid-19 treatments and the hope for a speedy discovery of a vaccine. I always think: there’s no cure for what ails me, or Annie, or all the people like us who have lost someone important to them.

On the other hand, the pain has a Buddhist context; it’s called suffering in English, or dukkha in Pali. And when I think of it this way, I realize that not only is there a remedy for my sore throat but that it’s already at hand. The remedy is awareness, the very thing my sangha has helped me cultivate.

The digital world isn’t everything, but it’s richer than I could have imagined. It may have even touched Kalen in an unexpected way during his final hours. Whenever one of us reported that he or she had meditated, the other two would respond with a thumbs-up emoji. The night Kalen died, I sent him a heart emoji by accident. I must have been distracted. Immediately, I felt silly, so I tried to delete it. But the app wouldn’t let me take it back. I settled for adding a thumbs-up sign. Looking back, I’m comforted by the slip. I don’t view it so much as a mistake, but as serendipity.

Because there was another exchange of texts between Annie and Kalen shortly afterward, I’m pretty sure he saw my little red heart before he died. I no longer feel embarrassed by it; I hope he felt the love I sent to him in his final hours, and I think he did. In fact, I’m convinced he didn’t even need an emoji to feel it. He and Annie—my two clever, sensitive friends who spent years meditating and cultivating awareness—surely knew I loved them both all along.

Rachel Paige King is a freelance writer whose work has appeared in The Atlantic, Slate, Salon, and many other publications.