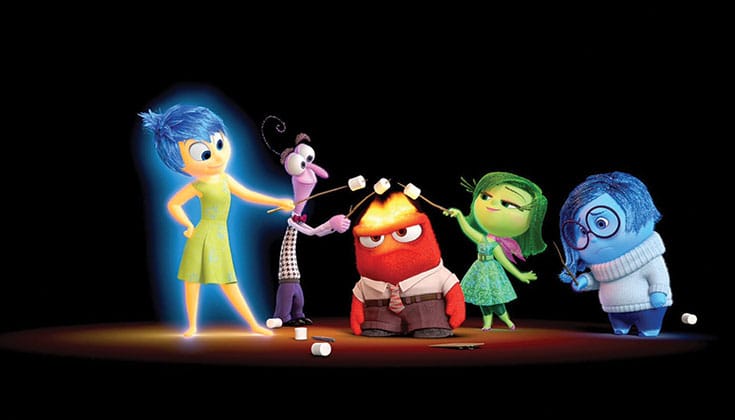 The hit film Inside Out will delight children and help them appreciate their emotions—even the difficult ones. Melissa Myozen Blacker offers tips for watching it together.

Talking about emotions with your kids isn’t always easy, but this year’s blockbuster Pixar film Inside Out can be a real help. It’s not specifically Buddhist, but it explores important truths about the nature of the self and emotions that parallel Buddhist teachings. And kids—and adults—will love it.

Inside Out is based on the work of two leading experts on emotions who consulted on the film: Dacher Keltner, codirector of the Greater Good Science Center, and Paul Ekman, coauthor with the Dalai Lama of Emotional Awareness.

Writer-director Pete Docter takes five basic emotions—sadness, joy, anger, disgust, and fear/surprise—and transforms them into colorful characters who run a control panel that represents the heroine Riley’s mind. The film portrays the self as a combination of emotions, memories, and thoughts, all working together to create the illusion of a separate personality. It treats all emotions as equal in value and essential to healthy human functioning.

Your children will naturally want to talk about this film with you. First, though, you may want to take some time to let its message into your own heart. You can ask yourself (and your partner, if you wish) the following questions:

Many of us tend to dismiss anger, fear, sadness, and disgust in favor of positive emotions like joy. We fight against or avoid these emotions because we don’t see their use. But not giving our emotions room to be felt fully leads to acting them out in unconscious, rigid, and harmful ways.

Valuing these “negative” emotions means understanding how they can lead to positive outcomes. For example, making room for anger allows us to clearly see injustice and act against it with a sense of purpose. Fear and disgust help us see danger and avoid harm.

Sadness is perhaps the most important emotion to meet with full awareness. In the movie, sadness acts as the vehicle for the maturation of Riley’s personality. It colors happy memories with the inevitability of change and loss and allows Riley to reengage life with openness, curiosity, and energy. Sadness and joy work together to create a fully nuanced personality.

Inside Out is very clear about the difference between sadness and depression. At one point, the characters Joy and Sadness get locked out of the control room. Without the steadiness of these two basic emotions, Anger, Fear, and Disgust go into panic mode, and eventually they’re also shut out of the control panel. Then we see Riley descend into depression, a state of apathy and despair, because she is disconnected from the vibrancy of emotional intelligence and connection.

After you’ve considered the message of the film for your own life, you’re ready to use it as a way to talk about emotions with your children. In discussions like these, it’s often best to let them take the lead. So after watching Inside Out, you could ask them what they liked about it or what disturbed them.

If you have very small children, they might say they liked the humorous, exciting story or felt resonance with a particular character. You could then engage in some roleplay by asking them to take on the personalities of the different emotions. Having a child act out Anger, Fear, or Disgust can be liberating. Your task is to welcome these feelings as natural, even exciting. The lesson here is that everything your child feels is normal.

With older children, you can talk about some of the questions that you have asked yourself. You can also ask them:

Riley doesn’t have an easy time in the movie. She experiences transition, loss, desperation, and shame. You can ask your older child if he or she has had similar experiences. It’s possible that you’ll hear stories from school or friendships that will surprise you. Do your best to listen with attention and compassion, without trying to fix your child or give advice.

The final lesson of Inside Out is that joy and sadness are a pair. Together, they help us connect to each other with love and understanding. Note your own, your partner’s, or your children’s resistance to any of these primary emotions. Remember that allowing everyone to feel what they feel, without mindlessly acting on those feelings, can be liberating for the entire family.

Melissa Myozen Blacker, Roshi is the Abbot of Boundless Way Zen and has a private practice in contemplative counseling. She is co-editor of The Book of Mu: Essential Writings on Zen’s Most Important Koan. She will be teaching at the annual Lion's Roar retreat, "Facing Life's Challenges" from October 19-21, 2018.