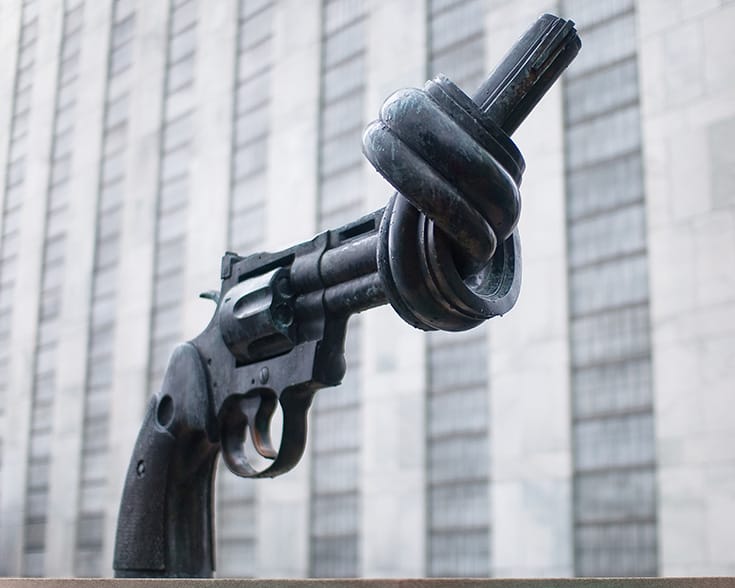 After December, 2015’s mass-shooting in San Bernadino, Zen teacher Lewis Richmond had to wonder: What is an appropriate or effective response as a Buddhist?

Since such events evoke strong visceral emotions, including fear, I thought it might be helpful to report some facts about gun violence in America I have gleaned from my recent readings. Some of these are rather counterintuitive.

For example, in the last 30 years the overall incidence of gun violence has dropped rather dramatically. Yes, it’s true. In fact, serious crime of all types dropped in that period too, perhaps due to the decline in drug related violence. Another fact: since 9/11, there have been about 100 deaths in America from terrorist violence; during that same period, overall deaths from guns (which include many incidents of suicides and domestic violence) exceeds deaths from the Vietnam, Iraq, and Afghanistan wars combined. Every day, every week, large numbers of Americans are killed by guns, a situation that is unique in the developed world.

Since the subject of gun control has been much in the air and in the news, here is another counterintuitive fact: the ratio of gun-owning households has declined significantly in the last 20 years, while the overall number of guns in America (around 300 million now) has gone up markedly in the same period. This means that people who own guns do not own just one; they own 5, 10, 20, 100—or in one recent case, 5000. There are also differences of geography and ethnicity. Per capita household ownership of guns is highest in the South, lowest in the Pacific seaboard and the Northeast.  Whites own substantially more guns per capita than people of color such as Latinos, Asians and African-Americans. Even if strict gun control laws were passed tomorrow, unless we were actually willing to confiscate most guns (as Australia did after a mass shooting there), those 300 million guns would still be out there. This near-infinite supply of firearms is like a dangerous horse who left the barn a long time ago.  Good luck trying to get the horse back in the barn.

I regret that I cannot offer citations for all these facts; I did not realize I was going to be writing a piece like this at the time I read them. I know my sources were all reputable news sites, and that their data came largely from the FBI database of crime statistics. I report all of this because, among other things, Buddhism is based on the observation of how things actually are.

So I feel our response as Buddhists should also be based on facts rather than emotion. The first and foremost precept of Buddhism is ahimsa—non-violence, non-harm, no unnecessary harm. This is true of all sects and traditions of Buddhism past and present. I feel strongly that as Buddhists we should represent our non-harm precept in any way we can, and be prepared to stand up for it. I don’t think this means we should just meditate, say the loving-kindness prayer, and so on. I think our response needs to be more muscular and practical than that. When someone is firing randomly into a crowd with a semi-automatic rifle, the loving-kindness prayer is not going to help. We should also remember the first noble truth of Buddhism,  that human existence is marked by suffering. This doesn’t just mean that people suffer now and then, it means that because of our human tendency to yield to the three “poisons” of greed, anger, and confusion, human beings are constantly creating wars, injustice, exploitation, cruelty, and many forms of unimaginable suffering. We always have and to some extent always will. Wars are so terrible that we easily arrange to forget them. But they are horrible—always.  My teacher Suzuki Roshi lived through the worst of World War II in Japan (he was not drafted into the Army and lived out the war in his home temple, probably performing a lot of funerals for young men). When asked about the war, he just said, “My whole country went crazy.”

It may seem as though we are living in a particularly violent historical time, but the psychologist and best-selling author Steven Pinker has researched this point exhaustively, and his conclusion is that the incidence of war, violence, and cruelty has been steadily decreasing over the last 1000 years.  Yes, from his point of view we are actually making progress, snail-like though it may seem. That seems to me to be a useful and little-remarked-upon perspective.

And lastly, the Buddha was one of the first great teachers to recognize that in the human realm things happen for a reason. Even the most heinous perpetrators of violent acts are still human beings, acting out of desperation, rage, ideological fervor, or mental illness. While we cannot and should not excuse them, as Buddhists we should avoid dehumanizing or vilifying them to the point that we respond in kind. An eye for an eye is a visceral response that seems to satiate our own rage, but Buddhism teaches that there are many eyes, not just the ordinary flawed human one. One of those is the wisdom eye, which sees things just as they are, whether good, bad, or incomprehensibly evil, and responds appropriately. What the wisdom response to these extremities of violence is not obvious to me. Nor to you, nor anyone else, probably. It will require careful study and reflection for each of us. And patience. Humanity as a whole is in this for the long haul. We should be too.

This article was originally posted on lewisrichmond.com.