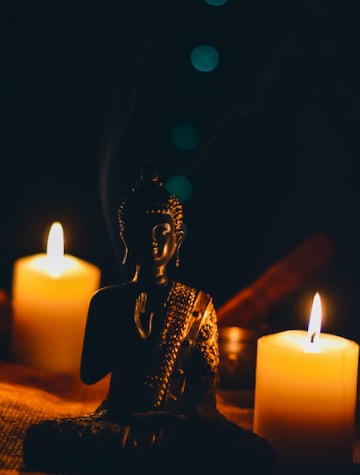 The Buddha knew that illness is a natural part of human life. Toni Bernhard shares how the first noble truth has helped her gracefully accept being chronically ill.

After a long journey of discovery, with many ups and downs, the Buddha, an ordinary human being like you and me, sat down under a tree and stayed there until he attained enlightenment—also known as liberation, freedom, or awakening. At first he wasn’t sure if he could find the words to share his experience, but eventually he gave his first teaching in the form of what is known as the Four Noble Truths. Buddhism—what Buddhists call the Dharma, which means “teachings”—was born.

Many people will tell you they know the first noble truth, but their usual rendering, “Life is suffering,” is responsible for a lot of misunderstanding about what the Buddha taught. In offering us the first noble truth, the Buddha was not making a negative pronouncement. He was describing the conditions of life that are shared by all human beings. He presented them as a list of experiences that all of us, including the Buddha, can expect to encounter at one time or another during our lifetimes: birth, aging, illness, death, sorrow, pain, grief, getting what we don’t want, not getting what we want, and losing what we cherish.

Notice that illness is on the list, meaning that it’s a natural part of the human life cycle. How many people think of illness as natural? I hadn’t—until I encountered the Buddha’s list.

What all the items have in common is that none of them are pleasant experiences; indeed, they are often mentally painful or physically painful. It’s a daunting list, that’s for sure. No wonder people sometimes say that Buddhism is pessimistic. It’s not to me, though. The Buddha was simply being realistic and honest about the human condition. Since all of us will face these experiences at one time or another during our lives, I appreciate that the Buddha was upfront about them so I can start, right now, learning to respond wisely when they occur.

Even in the darkest early days of the illness, when I didn’t understand what was happening to me… I always had the first noble truth propping me up.

As I understand the Buddha’s intent, he began his teachings with these unpleasant and often painful experiences because we spend so much time in a fruitless effort to deny their presence or to try to make them go away. It is this relentless effort to escape what we cannot escape and to change what we cannot change that leads us to be dissatisfied with our lives.

The word the Buddha used to describe this dissatisfaction is dukkha. It comes from Pali, the language in which the Buddha’s teachings were first recorded.

Dukkha is too multifaceted and nuanced a term to be captured in its usual one-word translation, “suffering.” To capture the essence of what the Buddha meant by the presence of dukkha in our lives, it’s helpful to keep other possible translations of this key word in mind: unsatisfactoriness (that is, dissatisfaction with the circumstances of our lives), anguish, stress, discomfort, unease, to name a few. Dukkha is a term worth becoming familiar with, especially when exploring how to be sick.

When I first encountered the various translations for dukkha, they resonated powerfully for me. Finally, someone was describing this life in a way that fit a good portion of my experience, both physical and mental: stress, discomfort, unsatisfactoriness. What a relief to know it wasn’t just me and wasn’t just my life!

The feeling that the Buddha understood the difficulties I faced allowed me to start the day-to-day work of making peace with the realization that unpleasant and painful experiences are part of the human condition, and that we create dukkha—suffering, stress, anguish—when we resist this. Even in the darkest early days of the illness, when I didn’t understand what was happening to me (was I dying?), I always had the first noble truth propping me up, telling me, “You know this is the way it is. You were born and so are subject to illness. It happens differently for each person. This is one of the ways it’s happening to you.”

The Buddha didn’t say that life is only made up of the unpleasant experiences on his list. He was simply emphasizing that difficulties are present in the life of all human beings. Years ago, a law student told me that Buddhism was pessimistic. When I asked him why he thought that, he said, “Well, the first noble truth is ‘Life sucks.’” In trying to explain to him why that was not a valid translation of the Buddha’s teaching, a shift occurred in how I thought of the first noble truth.

Yes, it’s true that life brings with it a considerable share of unpleasantness and difficulties, but happiness and joy are available, too. The fourth-century B.C.E. Taoist sage Chuang Tzu referred to this world, this life we’re living right now, as the realm of the ten thousand joys and the ten thousand sorrows. The Buddha began his teachings by focusing on the ten thousand sorrows because our inability to accept them as part of life only makes things harder for us.

It’s a challenge to make peace with the Buddha’s list. This is partly because we’ve evolved to seek pleasant experiences and to avoid unpleasant ones. After all, doing so might be crucial to our survival; if we were living in the wild and didn’t run fast from some unpleasant experiences, we’d have ended up as some animal’s dinner! In our modern world, however, this bias to continually seek what’s pleasant and react with aversion to what’s unpleasant doesn’t always serve us well.

The first noble truth helps me gracefully accept being chronically ill. The Buddha’s list assures me that my life is as it should be because it’s unfolding in accord with the human condition, difficult as that can be at times. “Our life is always all right,” says the Zen teacher Charlotte Joko Beck in Everyday Zen. “There’s nothing wrong with it. Even if we have horrendous problems, it’s just our life.” Her words resonate powerfully for me every time I read them.

For me, “just my life” has meant ending my professional career years before I expected to, being housebound and even bedbound much of the time, feeling continually sick and often in pain, and living with the anxiety that pops up now and then that the cancer might return. Using Joko Beck’s words, I’ve been able to take these facts that make up my life as a starting point—to bow down to them and to accept them. From there, I work on looking around to see what life has to offer.

And I’ve found a lot.

The End of Dukkha

In the second noble truth, the Buddha said that what gives rise to dukkha is a specific type of desire I often refer to as “Want/ Don’t-Want Mind.” The Buddha referred to this unskillful desire as “the unquenchable thirst.” We experience it as an intense wanting—even a felt need—to have only pleasant experiences and not to have unpleasant ones. But neither of these two desires can be satisfied because they don’t reflect the realities of the human condition.

When we react to life’s unpleasant experiences by launching a militant battle against them—for example, by denying that we’re chronically ill or by turning away in aversion from the need to grieve our losses—we create dukkha (suffering, stress, dissatisfaction). We also create dukkha when we expect to have only pleasant experiences, even though no one’s life is pleasant all the time. In short, when we’re unable to accept that our lives will be a mixture of joys and sorrows, pleasantness and unpleasantness, successes and disappointments, we make things worse for ourselves because we’re adding dukkha to the mix.

In the third noble truth, the Buddha proclaimed that the end of dukkha is possible. It’s important to note, though, that bodily pain and suffering are an inescapable part of the human condition. Everyone experiences them at some point in life. The good news is that we can reach the end of suffering in the mind—even while in this suffering body.

In the fourth noble truth, the Buddha set out the lesson plan to accomplish this: the Eightfold Path. With the end of dukkha comes enlightenment, awakening, liberation, freedom—I suggest you pick a word that resonates best with you. We may not be able to complete the lesson plan of the Eightfold Path in this life; we may not become fully enlightened beings any time soon. That said, a glimpse of awakening, a moment of liberation, a taste of freedom is available to us all—and it can take us a long way toward easing our experience of dukkha.

From How to Be Sick: A Buddhist-Inspired Guide for the Chronically Ill and Their Caregivers. Copyright 2018 by Toni Bernhard. Excerpted with permission from Wisdom Publications.