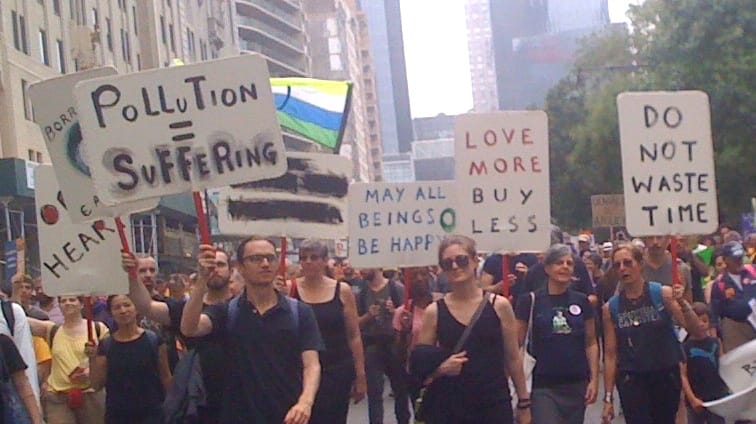 In early March in New York City, we reached temperatures of 60 and 67 degrees. The average high for March is 48 degrees. That is the historical average; temperatures of the last three years have beaten all precedents. While I’m the first to admit that I abhor cold weather, what I ultimately want, and need, is a world that is stable, sustainable, and provides a stable home to all living beings.

But Elizabeth Kolbert, in Field Notes from a Catastrophe, says that “computer models of the earth’s climate suggest that a critical threshold is approaching. Crossing over it will be easy, crossing back quite likely impossible.” We may have reached the climate point of no return, and large-scale species die off may be inevitable.

Awareness of probable future environmental devastation causes me great pain. About such pain, Kristin Barker, director and co-founder of One Earth Sangha (whose “EcoSattva” training I recently took part in) says that active engagement “is the only skillful thing I know to do” with it.

It can easily seem, in light of the dominance of a political party that denies global warming, has rushed to dismantle environmental protections, and rubber stamped planetary extraction and exploitation, that nothing we do matters. But falling into the paralysis of despair is not an option, and that is why, on April 29th, I will join the Peoples Climate March in Washington D.C. I ask everyone who believes that clean air and drinking water is the right of every living being to join me in the march. I ask everyone who cares about the health of the next generation, and the generations thereafter, of all living beings, to march alongside me as well, because I don’t want to do this alone.

As Bhikkhu Bodhi said in his Buddhadharma commentary, “Let’s Stand up Together,” “We’re entering a turbulent time when it won’t be enough for us merely to adopt the dharma as a regimen of resilience, a means of maintaining inner balance against the shock waves rippling across the social landscape.” In other words, we can no longer sit in the comfort of a meditation hall, wishing for our own liberation, without also wishing for the liberation of others. How can we, knowing the interrelatedness of all beings, only care for our own liberation? In the Sedaka Sutta, the Buddha said that “Looking after oneself, one looks after others. Looking after others, one looks after oneself.” What this means is, if I want to breathe clean air, free of carcinogens and other pollutants, I will make sure you, too, are able to breathe clean air, because your air is my air. Fukushima’s radiation is California’s radiation, and the entire Pacific Ocean’s radiation, for that matter. We simply can’t wall ourselves off from pollution’s effects, no matter how hard we try, and that is why, as Pope Francis says about climate change, there is a clear, definitive, and ineluctable ethical imperative to act.”

Buddhism, too, places a strong emphasis on moral and ethical conduct. The fourth of the Four Noble Truths points us in the direction of ending suffering by following the Noble Eightfold Path, our roadmap to liberation. Sila, or moral conduct, is one of the three pillars of dharma; we can’t practice Buddhism without engaging in it.

The narrative that Buddhists don’t or shouldn’t engage with matters of the world is a mistaken one.

In order to be relevant, we Buddhists must learn to practice compassion off the cushion, putting our compassionate practice into action. The narrative that Buddhists don’t or shouldn’t engage with matters of the world is a mistaken one. As the Buddhist Declaration on Climate Change,  “composed as a pan-Buddhist statement by Zen teacher David Tetsuun Loy PhD, Theravadin teacher Ven. Bhikkhu Bodhi and Buddhist scientist John Stanley PhD,” says:

We have a brief window of opportunity to take action, to preserve humanity from imminent disaster and to assist the survival of the many diverse and beautiful forms of life on Earth. Future generations, and the other species that share the biosphere with us, have no voice to ask for our compassion, wisdom, and leadership. We must listen to their silence. We must be their voice, too, and act on their behalf.

I hope you will raise your voice and march with me in the Buddhist contingent of the march, along with Greenfaith, other faith traditions, and hundreds of thousands of others at the Peoples Climate March in Washington, DC. I’ve been organizing to help get people there by way of what we’re calling a “Rolling Retreat”; more info on that here.)

I look forward to practicing compassionate action with you.

Regina Valdez is a freelance writer, Engaged Buddhist, and outreach coordinator for Buddhist Global Relief and Compassion NYC. A recent graduate of One Earth Sangha's EcoSattva Training Program, she organized the Triple Gem Rolling Retreat for those wishing to attend the Peoples Climate March in Washington, DC.