In this commentary from the Spring 2017 issue of Buddhadharma, monk-scholar Bhikkhu Bodhi urges Buddhists to become “more visible as advocates of peace, basic sanity, and social justice” — and explains why doing so transcends party politics. 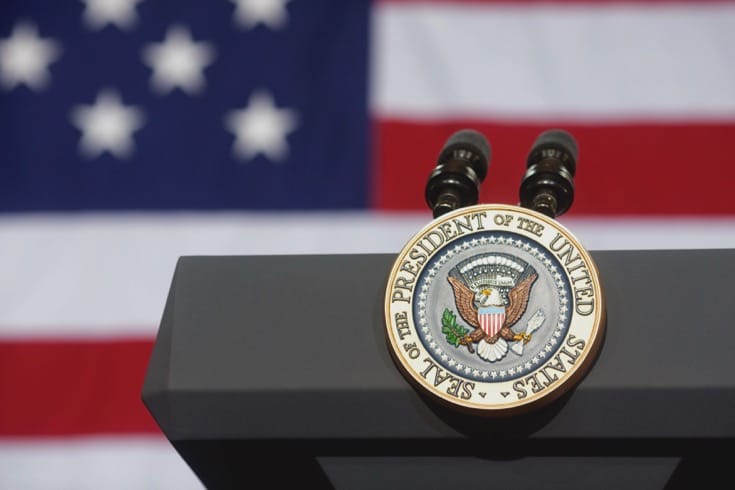 I recently came across a news report stating that 2,500 religious leaders had signed a petition urging Congress to reject Donald Trump’s cabinet nominees as “a cabinet of bigotry.” I looked over the list of signatories, designated by religion, and saw only one who identified as Buddhist. This observation reinforced my puzzlement as to why Buddhist teachers and leaders in the U.S. are not more outspoken in addressing issues of public concern. Considering that Buddhism is widely hailed as the preeminent religion of peace and compassion, why, I ask myself, aren’t we more visible as advocates of peace, basic sanity, and social justice?

We’re entering a turbulent time when it won’t be enough for us merely to adopt the dharma as a regimen of resilience, a means of maintaining inner balance against the shock waves rippling across the social landscape.

Granted, our numbers are small, but I don’t think that is the only reason for our reticence to speak up. Several other factors may also be involved. One is the adoption of the dharma as a path to personal happiness to be pursued mainly in the silence of the meditation hall. A second is the fear that political activism will fire up our passions and shatter our fragile calm. A third is the belief that active engagement with worldly events is an entanglement in illusion. And still a fourth is the view, widespread among dharma teachers, that we must welcome everyone and not risk alienating potential students by expressing our political convictions.

Now, I believe that teachers whose primary job is to teach the techniques of meditation practice should not expound their personal political views from the cushion. It’s also unfitting for heads of dharma centers to use their authority to endorse candidates for office or throw their community behind a political party. Nevertheless, I would draw a sharp line between political endorsement and advocating on public issues, and I would hold that to address such issues is well within a dharma teacher’s domain. Politics today is not merely a battleground over power and position; it is also an arena where great ethical contests are being fought, contests that have a crucial impact on everyone in this country and on this planet. If, from fear of upsetting others, dharma teachers shy away from addressing these critical matters, their silence could even be considered an abdication of their responsibility as spiritual leaders.

There are certain convictions that we as Buddhists hold and consider inviolable. We believe, for instance, that every human being possesses intrinsic dignity, that everyone should be treated fairly, that those fallen into hardship should be protected and given the chance to flourish, and that the resources of the earth should be used judiciously, out of respect for the delicate web of nature. The inauguration of Donald Trump as America’s new president is likely to strain each of these beliefs to new limits. We’re entering a turbulent time when it won’t be enough for us merely to adopt the dharma as a regimen of resilience, a means of maintaining inner balance against the shock waves rippling across the social landscape. We’ll need a bolder agenda, a program of collective resistance inspired by a radically different vision of human interconnection, one that affirms our duty to respect and care for one another and to maintain a habitable planet for generations yet unborn.

To stand up and speak out in support of such ends is not necessarily to meddle in party politics. It is, rather, to bring the moral weight of the dharma to bear on matters that affect the lives of people everywhere.

If, as upholders of Buddhist faith, we’re to make our distinctive mark on public policy, we may have to establish a Buddhist advocacy group, a pan-Buddhist alliance grounded in the recognition that hot political disputes are also burning ethical issues on which we should take a stand. Through such an alliance we can bring the power of Buddhist conscience out into the public arena. Since our numbers are relatively small, we won’t be able to make much of an impact on our own. But we can join with progressive leaders of other faiths who share our convictions, advocating together on behalf of human decency and in defense of our embattled democracy. We can call, in unison, for a policy of global generosity in place of rash militarism, for programs that protect the poor and vulnerable, for the advancement of social and racial justice, and for the rapid transition to a clean-energy economy. To stand up and speak out in support of such ends is not necessarily to meddle in party politics. It is, rather, to bring the moral weight of the dharma to bear on matters that affect the lives of people everywhere—now, and long into the future.

A Directory of Actions, Practice, and Learning in Response to the Inauguration:

Buddhists Take a Stand: The March on Washington and Beyond