With the Holiday season upon us, Sumi Loundon Kim reflects upon her split religious identity: culturally Christian, devoutly Buddhist. 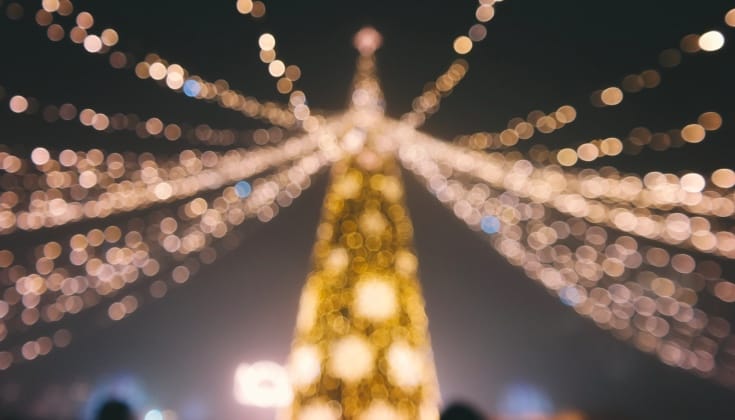 This last Christmas eve, my husband and I decided to take our young children to our local chapel, a building much like the cathedrals of France, to participate in the traditional Lessons and Carols pageant. As Joy to the World rang throughout the arches, I found myself singing along, knowing almost all the words. Likewise, I knew Silent Night, Hark the Herald Angels Sing, O Come Let Us Adore Thee, and all the rest. I could not believe it, but I was more familiar with the music of the Protestant tradition than the chants of Buddhism. It was then that I realized that I have memorized more prayers in the Christian tradition than in the Buddhist. And, I also saw quite frankly that I felt less self-conscious, more at ease, in a church than in a Buddhist temple.

And this, despite being raised in a Zen center in childhood, followed by a committed Buddhist life from the age 16 on, and having lived and worked in a Vipassana meditation center for some years!

It is time for me to admit it to myself: I am culturally a Christian, in particular, a New England Protestant. I love the old, bare, wood churches. I like listening to a sermon. I like sitting in chairs instead of on the floor. I like verbal prayer in my native language. My wedding was in a distinctly Christian format but with Buddhist content.

For many years, I have puzzled over something His Holiness the Dalai Lama said in an interview in 2003. He advised those from other religions to not convert to Buddhism. I thought this was a striking statement, particularly since most religious leaders want others to convert to their religion! But over time, as I observed Westerners struggle with understanding Buddhism, with their religious identity, and with the awkwardness of being in foreign environments, I began to see what the Dalai Lama was getting at. I know Western Buddhists who are deeply committed to the Buddhist way of life, but they cannot accept the concepts of rebirth or karma, or they still kind of talk about the world from a Western-ish, Judeo-Christian perspective. When it comes to life passages—birth, coming of age, marriage, and death—many Western Buddhists are more comfortable with Christian-like forms of ritual.

But more significantly, what I have seen is that many Westerners, after spending some years in the Buddhist world, return to their home faith tradition and are able to find value and depth in it in ways they find compelling. I was recently on the phone with my dear friend Rebecca, raised in a Conservative Jewish home, and who learned Hebrew as a child. For about five years, she left that heritage and explored Buddhism — quite seriously, in fact. She lived and worked at the same meditation center as I did. Then, after leaving, she found herself, in her late twenties, feeling stirrings for the Jewish tradition of her childhood. Lately she has been going to the synagogue and teaching children. She was surprised by this return, she told me, but now she sees the value of her tradition. I think she feels very much at home.

It is actually hard for me admit that I am more at home in a traditional (not evangelical or other new style) Christian setting than in a temple. I think of myself in every way as a Buddhist, including finding the concepts of karma and rebirth completely sensible and useful. I meditate, I chant in Pali, my friends are Buddhist, my husband is Buddhist, I have an altar, I wear a yumju (mala)on my wrist, I write about Buddhism, I study it, I think about the world in these terms. And, on the other side, I don’t believe in God or heaven and hell, and I do not believe that Jesus Christ is the one and only savior. But I can’t deny that when it comes to music, art, ritual, and culture, a Christian-like modality comes more naturally to me.

For the last ten years, I’ve had extended contact with Korean culture through my marriage to a native Korean. I’ve sometimes wondered about those Koreans who are Christian. I have heard that they too struggle with reconciling some of the religious-cultural elements of Korea and Asia with that of Christianity. Ancestor-worship, for example, doesn’t quite fit with Christian theology, yet this custom is so deeply woven into Asian culture that it is almost impossible for a Korean Christian not to participate in some way. I think it unwise to fight against one’s culture in order to adhere to a religion more perfectly. Why not embrace the complexity of our heritage and even honor our roots, even if those roots are mixed strangely with our beliefs? What do you think?How do you work with diverging cultural and religious forms?