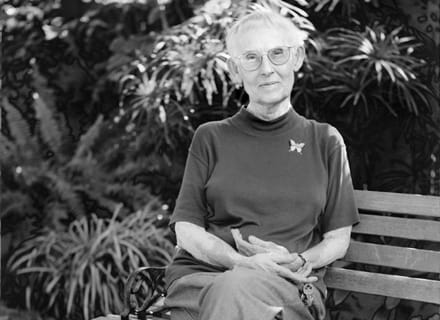 Barry Magid remembers the great pioneer of American Zen, Charlotte Joko Beck, whose influence is “reflected in a sea change in how our generation thinks about the nature of practice.”

It is not an overstatement to say that Joko Beck transformed the face of Zen in America, not in the least by making it the face of a woman. She was among the first generation of Westerners to inherit the dharma from their Japanese masters, at a time when a focus on the experience of kensho, or awakening, led to a dismissive attitude toward problems that were “merely” psychological. Having fully mastered the traditional koan system, Joko worked to restore a sense of emotional reality to a scene that had become increasingly plagued by scandal and misconduct by our allegedly enlightened role models. She had the courage to say that her own teacher’s training had done little to curb his alcoholism or deal with his character problems. Furthermore, his wasn’t an unfortunate exception, but pointed to a deeply ingrained tendency to enshrine emotional bypassing into the very heart of traditional Zen training. She put dealing with anger, anxiety, pride, and sexual exploitation of students into the center of what we must deal with in our practice.

When students were preoccupied with transformation, she took what was in danger of becoming a toothless Zen cliché—being just this moment—and turned it into the challenge of having no hope—a radical acceptance of the totality of the present. Yet she never failed to emphasize that at the bottom of the well of self was deep joy. A lifetime of teaching about death and dying was summed up as “this too is joy.”

Joko Beck does not leave behind an institutional legacy. There is no central Ordinary Mind School training center. There is no hierarchy among her dharma heirs, no single voice that clearly carries on her message. Her legacy is broad and cultural, reflected in a sea change in how our generation thinks about the nature of practice and its relationship to our personal psychological makeup.

One of her great virtues as a teacher was that she did not try to clone herself. She let us digest her teaching and grow in our own different directions. Even back when her dharma successors still attempted to get together for an annual Ordinary Mind School meeting, they seemed designed to prove Wittgenstein’s dictum that members of a group could bear a certain family resemblance to one another without necessarily having any single thing in common.

Her dharma seeds are scattered far and wide. They will go on sprouting in ways we cannot predict and cross-fertilize with other lineages. The Ordinary Mind School may grow or wither, but Joko’s influence is now everywhere.

Barry Magid, MD, is a psychoanalyst and psychiatrist. He is resident teacher at the Ordinary Mind Zendo in New York City and the author of Ordinary Mind: Exploring the Common Ground of Zen and Psychotherapy (Wisdom Publications).