Kay Larson reviews “Grain of Emptiness”, an exhibition at the Rubin Museum of Art. 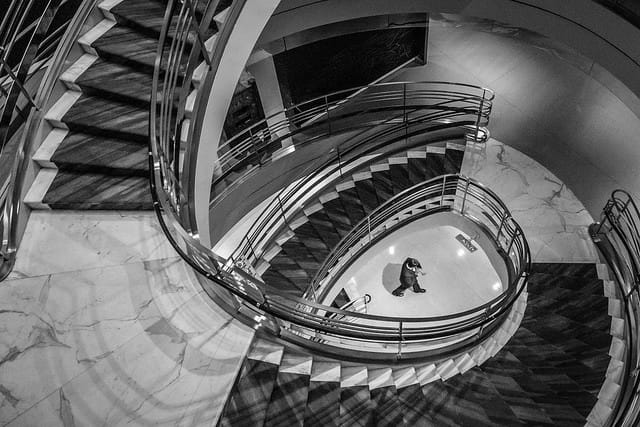 In its timely wisdom, the Rubin Museum of Art in Manhattan is asking interesting questions about the soft landing being achieved as the Buddha sets a gentle foot in Western culture. The traditional imprint of his teachings, as we know, is an emptiness (a footprint) given form by the stone that contains and defines it. Grain of Emptiness, the first exhibition of internationally renowned contemporary artists at a museum usually vibrating with brilliant thangkas, plays with that image. What is the form, what is the emptiness, in the transmission of the buddhadharma into the minds and lives of artists?

All but one of these five—Sanford Biggers, Theaster Gates, Atta Kim, Wolfgang Laib, and Charmion von Wiegand—say they don’t adhere to formal Buddhist practices. (Von Wiegand, the only one no longer alive, studied with a Tibetan teacher and did regard herself as a practicing Buddhist.) Yet most of them speak of a wordless affinity, a heartfelt longing—something “always believed in,” as black Chicago-born Theaster Gates says to writer Mary Jane Jacob in the catalogue. None of them uses traditional Buddhist art forms. All of them sense the subtle heart of emptiness in “the inner world of things,” to use Atta Kim’s phrase.

Kim, born in South Korea in 1956, is most attuned to the spirit of the Diamond Sutra, where the Buddha pulls back from every effort to grasp onto any kind of form. Kim tells me that he has absorbed Zen Buddhism (as well as Taoism and Confucianism) the way a child drinks water. I learn that Koreans recite the Heart Sutra as “color is emptiness; emptiness is color,” an observation that sparks a long discussion. It seems that “form” and “color” are essentially the same word in Korean.

Kim’s photographs engage formlessness through color. His degree in mechanical engineering helps give him precise control over his cameras. Multiple exposures of city streets—or people, or objects—are digitally layered, one atop the other, so they blend into a single moment of ephemerality and passage. For a Buddhist, the most compelling might be the 5,844 pages of the Chinese text of the Avatamsaka Sutra. This teaching on the interpenetration and fusion of all phenomenal experiences is photographed in a sequence of 2,922 double-page spreads. Kim exactingly merges the exposures. The words blur, and the sutra seems to vibrate visibly. I once had a dream that I could hear the Buddha teaching and though I couldn’t make out the words, it didn’t matter, because I knew them already. That’s the spirit of Kim’s work.

Multiple exposures are not new, but Kim’s scale is intense. Each photo in his series “City Indala” (the title references Indra’s Diamond Net) contains ten thousand layered shutter-shots of one urban center. The “ten-thousand things” of New York City accumulate in a gray fog that seems formless until you sense all the lives packed together in an ocean of coming and going. Displayed next to it is a golden fog containing the sum total of J.M.W. Turner’s paintings. Downstairs, a time-exposure video reveals Kim’s dramatically beautiful ice sculpture of the Parthenon slowly—and gorgeously—melting and flowing away.

Wolfgang Laib, one of the most admired of today’s sculptors, reveals an unexpected side of himself. His quiet and simple forms, which had always seemed Minimalist, turn out to be offerings—literally. Invited to collaborate on the installation, Laib was given his pick of the Rubin’s collection. He chose a red, black, and white Avalokitesvara thangka radiating luminosity. It’s installed on the wall above a low shelf holding Laib’s little red-lacquered house-form sitting on a bed of white rice. Along the floor, a row of gold-brass plates each holds a cone of white rice, except for one cone of brilliant yellow pollen. All of it is spiritual comfort food for famished humans.

In a talk at the Rubin, Laib made it clear that “coming and going” in the great sense is his life’s work. He began his first “milkstone”—which earned him instant acclaim in 1975—after he saw Hindus pour fluid milk over a stiff stone lingam in India. The milkstone at the Rubin is typical: a floor-hugging slab of polished milky marble is slightly indented to hold milk poured fresh daily by staff members. It’s visually impossible to tell which is marble and which is milk. Form and flow have merged in lotus-like white perfection.

Since that first trip, Laib has floated in the warm waters of the Buddhists, the Jains, the Sufi mystics. Too many artists use these teachings as intellectual props—but not Laib. He just “practices art” as though he’s lighting incense. Without the revealing context supplied by the Rubin, however, you might not guess that.

The Rubin performs a similar magic for Sanford Biggers. Born in Los Angeles in 1970, and deeply invested in black hip-hop culture, Biggers has lived in Japan, worn Buddhist robes, and ceremonially shaved his dreadlocks like a monk taking vows. He has long been making cross-cultural allusions. In Prayer Rug, colored sand poured directly onto a concrete gallery floor in New York in 2005 created Native American diamond designs. The pouring method invoked Tibetan sand mandalas, and the title suggested Islamic prayers.

In the circular staircase at the Rubin hangs a seven-foot circle of heavy glass contained by a rung of black steel. Step back and you see only a sunflower-like array of petals gleaming white in the glass. Up close, each petal reveals itself as the classic diagram of the hold of a slave ship, where human beings are lined up in orderly rows like so many barrels of rum.

This terrible image of unbearable suffering has appeared elsewhere in Biggers’ work. He painted a mural of the sunflower-slave ship in black on a Harlem wall, for instance. But something transformative happens when the light hits. For this piece, Biggers has meticulously hand-carved each figure and etched it into the glass. Installed in the stairwell, the sunflower-lotus burns with emptiness. Each slave ship, literally made of absence (the carved-away glass), is not here anymore. Each unbearable moment is gone. Each slave has become white light.

Only in a Buddhist museum would this realization reverberate down the long corridors of the dharma and speak of the immense transformative power of shunyata. The release from suffering becomes less a thought than an experience, a realization of inner light.

Meanwhile, this floor of the Rubin Museum hums with wordless songs of prayer. In his video Breathing, Theaster Gates shows us a beautiful young black woman with dangling black earrings and a crop of coiled black hair. With the grace of a dancer, she puts her hands together and begins reciting namu myoho renge kyo, the mantra of Nichiren Buddhism. The words flow into a seamless hum. The woman’s voice retreats as other black singers come forward, humming the familiar harmonies of gospel music. Christian, Buddhist—the names dissolve. What’s left is love and praise, formlessness and joy.

Charmion von Wiegand was a pioneer in her time. Born at the end of the nineteenth century, she wrote art criticism and sought the transparent spirit behind the forms. Drawn to Theosophy and its hybrid of Asian and ancient Middle Eastern religions, she shared this fascination with her friend Piet Mondrian. He was also seeking the shapes that would crystallize the invisible harmonies of the spirit. In 1949, sculptor Ibram Lassaw, a passionate student of Asian religions, introduced her to the Taoist meditation manual The Secret of the Golden Flower: A Chinese Book of Life, according to her New York gallery, Michael Rosenfeld. She began using Buddhist images in her work shortly afterward. In the 1960s she learned Mahayana practices from Tibetan Buddhists in exile, and in 1967 immersed herself in the teachings under the tutorship of Tibetan monk Khyongla Rato, a friendship that lasted till her death.

Her adventurous life put her far ahead of most of her era. She is known in the art world for her orderly geometries of color and form. The vibrant paintings at the Rubin date from the 1960s and are usually found hanging in the closets of Pop Art and Op Art. Now we learn that she was looking closely at Tibetan thangkas and was simplifying their spiritual systems into resonant images meant to invoke a higher reality. A painting like The Ascent to Mt. Meru is a pathway to a colorist heaven constructed of circles and squares. If it seems in some ways like an illustration of Tibetan visual themes, we have to remember what the rest of the world around her was like.

In creating context for an artwork, a museum has the gravitational power of a black hole. It’s difficult to imagine what would happen to von Wiegand’s work in the psychic gulf of the Metropolitan Museum of Art, for instance. The Rubin’s adventure in the surprisingly compatible realms of contemporary art and Buddhism performs a service that brings light to dark places and bodes well for future experiments like this one.