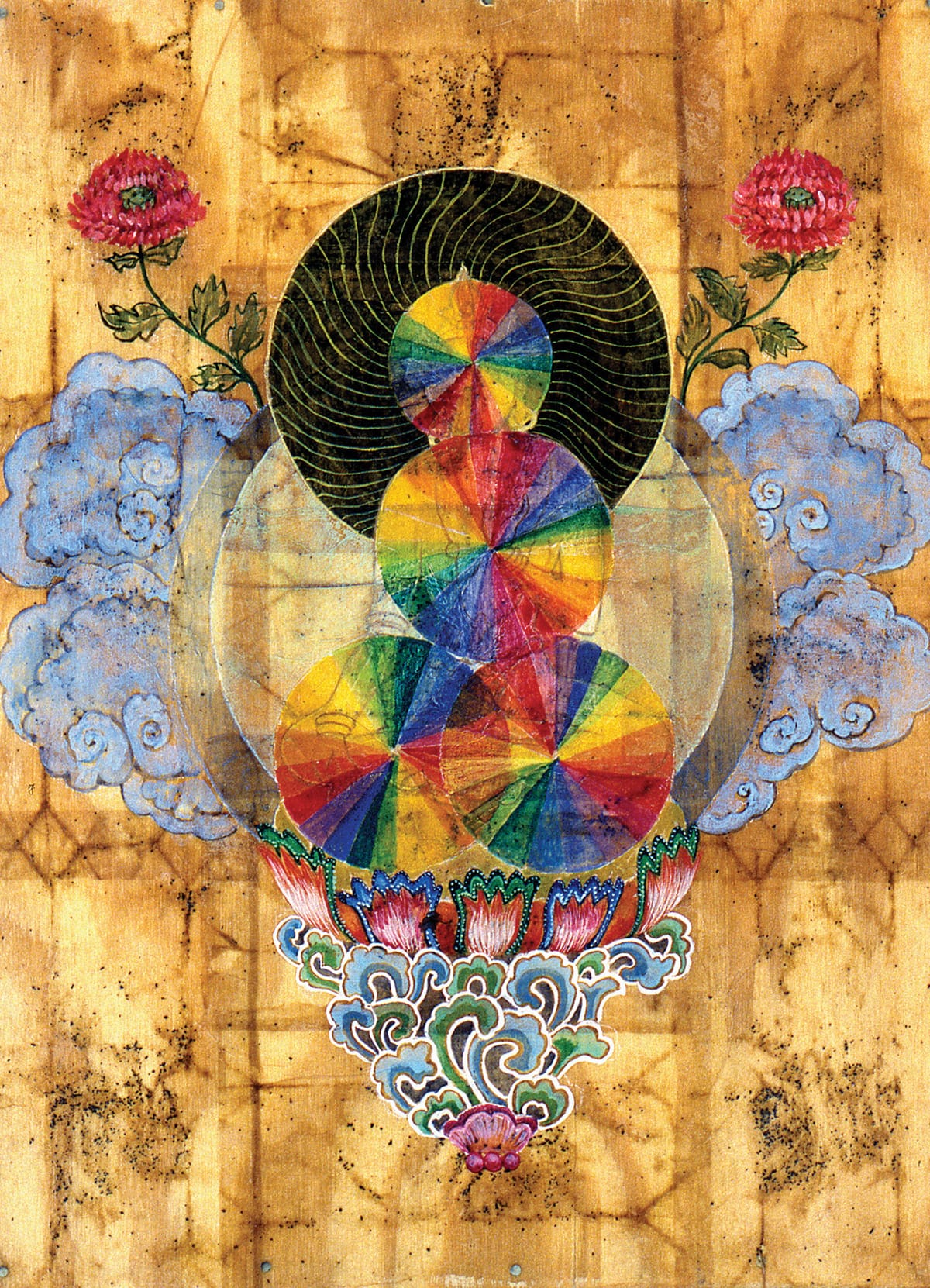 If we look across spiritual traditions, we find the human body is broadly envisioned to be a vessel that contains the essence of existence and transformation—a container, likened to clothes that are to be stripped off or a boat that is to be abandoned once one has reached the breaking shore at death. Similarly, there are modern philosophical and scientific models that conceive the body to exist separately from the mind, the kind of mind/body dualism that Gilbert Ryle described as a “ghost in the machine.”

Though we find practices of bodily abandonment and denigration throughout Indian spirituality, the Vajrayana Buddhist traditions that were received and developed in Tibet—due to the synthetic collaborations of Buddhism with the arts and sciences of medicine, astrology, alchemy, and physiology that occurred during the formative period of tantra during the seventh through ninth centuries—place an emphasis on the body as a locus of transformation. Similar to Daoist traditions of alchemical transformation, there are Vajrayana traditions that say that all tangible matter consists of congealed forms of the five elements: space, air, fire, water, and earth. As described in The Tibetan Book of the Dead and illustrated in the murals of the Lukhang or so-called Secret Temple of the Fifth Dalai Lama in Lhasa, there are cosmogonies that suggest the elemental energies that make up the cosmos are undifferentiated from those that make up the human body, and as such the body is a holon, simultaneously the individual person and the cosmic whole.

Vajrayana traditions view our bodies to be an evolutionary product of billions of years of bathing in bright light.

In Dzogchen cosmology, the primordial space of the cosmos is envisioned as being utterly open and translucent. Due to the natural effortless play of the cosmos itself, movement ensues. With this initial gesture, however slight, the element of air stirs up wind that oscillates rapidly into fire; from fire emerges the liquidity of water, and from water the solidity of rock and earth are stabilized. With this gradual gravitational collapse into the elemental forces that comprise the cosmos, a concomitant spiraling reconfigures matter into worlds wherein embodied beings emergently form. As such, the body is conceived to be a part of the whole, seemingly fragmented from itself. Not unlike contemporary astrophysics, Vajrayana traditions view our bodies to be an evolutionary product of billions of years of bathing in bright light.

According to Dzogchen tradition, under certain circumstances the cosmic evolutionary process of gravitational collapse into solidity can turn itself back into a swirling, highly radiating configuration. That is, there are Tibetan traditions that suggest that meditative technologies can intentionally reverse this process of collapse, thereby altering the gravitational field so the inherent radiance of these condensed elements blossom. When this happens, the five elements of the body transform into the five lights of the color spectrum. The Tibetan name given to this fluorescence is jalu, literally translated as “rainbow body.”

Material bodies dissolving into light is the subject of Rainbow Body and Resurrection by Father Francis V. Tiso, a priest of the Diocese of Isernia–Venafro who holds a PhD in Tibetan Buddhism. Exploring the body as a vehicle of spiritual transformation, this book presents Father Tiso’s research on postmortem accounts of the rainbow body of Khenpo A Chö (1918–98) in eastern Tibet, historical background on Dzogchen and early Christianity, and a comparative discussion of the rainbow body and the mystical body of Christ.

Father Tiso introduces his work by acknowledging that because research on postmortem paranormal phenomena cannot be conducted in a laboratory, there are inherent tensions that exist in conducting scientific investigations while relying on the good word of faithful informants. Seeking to take the approach of a participant observer in the tradition of anthropology, Tiso’s chapter on Khenpo A Chö is largely a series of journal logs from fieldwork in eastern Tibet and India and transcripts from interviews with local eyewitnesses. 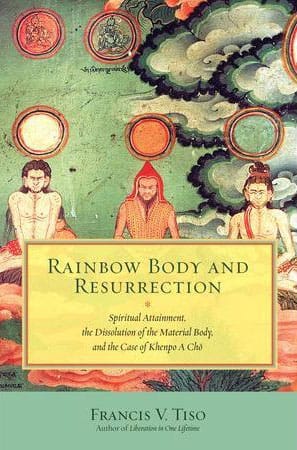 What is missing at the beginning of the book is an overview about rainbow body phenomena in Tibet. In addition to references to premodern episodes found in Tibetan literature, such as mentions of Padmasambhava’s consort Yeshe Tsogyal going rainbow, reports of rainbow bodies have been emerging from Tibet sporadically over the past century. Perhaps the best known among English-reading Buddhists is that of Yilungpa Sonam Namgyel, who went rainbow in 1952, as recounted by the late Chögyam Trungpa in his memoir, Born in Tibet. There is also the case of Changchub Dorje (1826–1961?), a medical doctor and leader of a Dzogchen community in the Nyarong region of eastern Tibet, about whom we have stories from his living disciples, including Lama Wangdor, and from Chögyal Namkhai Norbu’s The Crystal and the Way of Light. Other well-known cases include: Nyala Pema Dudul (1816–1872), whose life story was written about by the great Nyingma master Mipham Gyatso (1846–1912); the Bonpo meditation master Shardza Tashi Gyaltsen (1859-1935); Lingstsang Dzapa Tashi Odzer; and Khenchen Tsewang Rigzin (1883–1958). Also within the past few years there have been several reports such as those of Lama Achuk (1927–2011), Khenpo Tubten Sherab (1930–2015), and most recently, the mother of Lokgar Rinpoche. What is striking about many of these exceptional figures, including Changchub Dorje and Khenpo Tubten Sherab, is that they tended to be unflashy and nonchalant about their meditative accomplishments. In fact, there are numerous stories in Tibet of inconspicuous nomads and illiterate common folk who shocked their communities by going rainbow.

One particularly fascinating social dynamic that has emerged since the Cultural Revolution—and this has affected the reporting of numerous cases—is that the Chinese government has declared going rainbow to be illegal. In effect, because the phenomena so dramatically challenge the normative paradigm, there has essentially become a “don’t ask, don’t tell” policy about masters going rainbow in Tibet. For instance, Changchub Dorje’s shrunken bodily remains were hidden from authorities for years until the proper ceremonies could be openly performed.

So what exactly does rainbow body look like? According to these traditions, there are signs that indicate an adept has stabilized meditative realization of the mind’s innate basic radiance. While alive, it is said that the bodies of these beings do not cast a shadow in either lamplight or sunlight; at death, signs include their physical bodies dramatically shrinking in size, and their corpses exuding fragrances and perfumes rather than the odors of decomposition. A common Tibetan metric for the shrunken corpse of a body gone rainbow is the “length of a forearm.” In the case of Khenpo A Chö, as Father Tiso notes, the local Chinese press reported that his body “shrank to the size of a bean on the eighth day and disappeared on the tenth day. What remain are hair and nails.” Other signs are the sudden blooming of exotic plants and flowers anytime of year and, of course, rainbows appearing in the sky.

These signs mark someone who has attained rainbow body, and some are said to have occurred in each of the cases mentioned above. However, there is also a special kind of rainbow body known as the great transference into rainbow body, or jalu powa chemo. This is the complete transference of the material body into radiance so that the only residue of the body is hair and fingernails. Great transference is a deathless state. Realized by Dzogchen meditation masters such as Garab Dorje and Padmasambhava, the great transference rainbow body is understood to be the actual enlightened qualities of these realized masters. Not unlike Christian saints, these qualities are understood to be continually available for beings to receive through the reception of light.

While it is tempting to draw parallels between the luminous bodies of Dzogchen meditation masters and saints, or even with the risen mystical body of Christ, Father Tiso goes one step further. Discussing the exchange of religious ideas along the Silk Route, and possible historical influences of Syriac Christianity and Manichaeism in the pre-Buddhist civilization of Tibet, he asks if the first human teacher of Dzogchen, Garab Dorje, could have been a Christian master imported from the Middle East—or even the messiah himself.

The strength of Father Tiso’s book is its tremendous and ambitious breadth. He brings to the reader’s attention a broad spectrum of doctrinal and historical information not only about what he refers to as the “Church of the East” and possible doctrinal influences of Christian light mysticism on Tibetan religion but also about early Dzogchen practice. Discussing encounters of Christianity with Buddhism and Daoism, he cites little-known Christian mystics, including the Desert Fathers of Egypt, Evagrius, Abraham of Kashkar (ca 501–586), and John of Dalyatha (ca 690–786), all of whom he argues were critical figures in spreading the “religion of light.”

One example of this cross-fertilization with which Father Tiso tantalizes us is the Jesus Sutras, seventh-century Christian texts that were preserved among the caches of manuscripts discovered in the Central Asian cave complexes at Dunhuang. Thought to be have been produced by the Church of the East and Syro–Oriental Christian communities who traveled along the Silk Route, these texts remarkably borrow literary forms and devices employed in Buddhist sutra literature while echoing doctrinal claims of Christian theology in typical Buddhist parlance. For instance, similar in arrangement to many Mahayana Buddhist sutras, these texts present a question-and-answer dialogue about topics of spiritual self-cultivation, except instead of speaking with the Buddha, the interlocutor is the Messiah Christ.

Am I convinced that a Church of the East influenced Dzogchen in Tibet? Was Garab Dorje actually Jesus Christ? Did Christian light mysticism have a significant historical impact on the formation of yogic technologies that culminated in Tibetan expressions of rainbow body? These are certainly alluring questions. However, that’s not entirely the point. Father Tiso makes a compelling case by bringing his reader an intercultural, cross-historical, and interreligious discussion of the esoteric arts. To what extent there was bona fide synthesis among these meditative traditions from Egypt and Syria to China and Tibet is a discussion that warrants more attention and that this book propels forward. What’s most important, however, is that this work brings attention to the shared human experiment of contemplative transformation.