Stephanie Kaza reflects on this treasured spiritual guide and landmark thinker. With humanity at a crossroads, she offers us the wisdom, courage, and love for life we need. 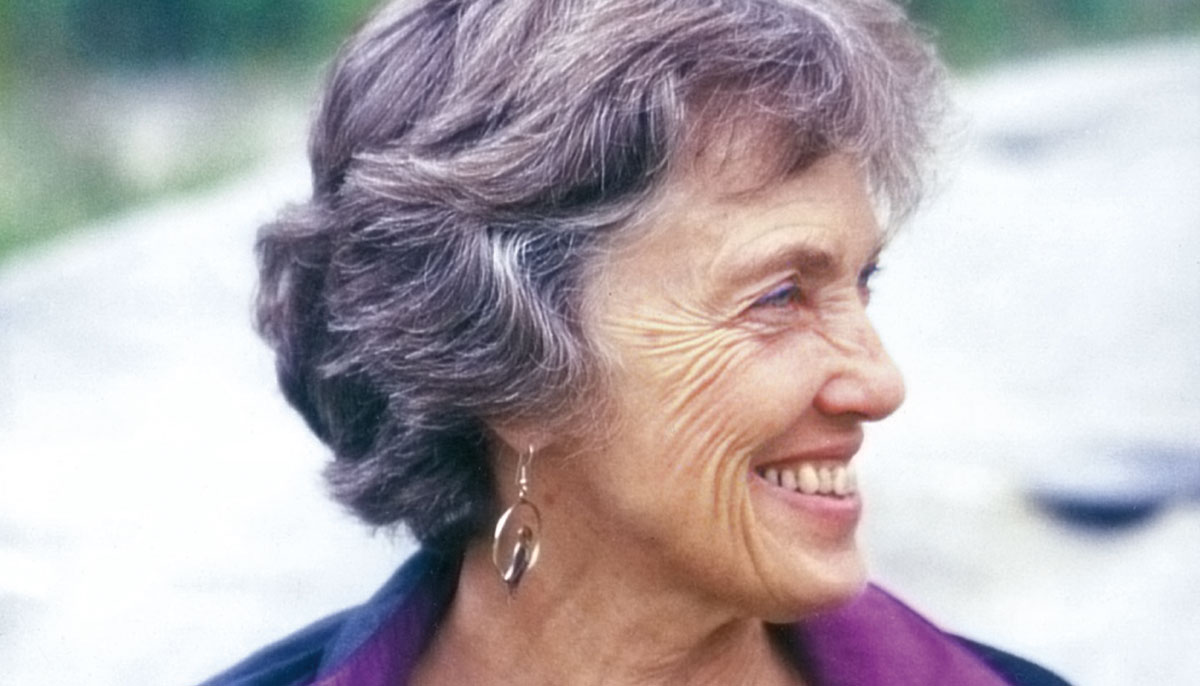 From the very beginning, Joanna has been clear that the work is meant to be given away, that no one owns it. She never sought the role of head teacher or spiritual guru. Instead, she chose the generative path of mutual empowerment, based on building community, trusting the expression of strong emotion, and believing in the power of transformative insight.

Like many others, I have had the good fortune to train with Joanna and I have highlighted her groundbreaking framework for personal and social change in my own teaching. For me and thousands of dedicated practitioners around the world, Joanna is a deeply treasured spiritual guide and landmark thinker.

Joanna’s wide-ranging work across six decades has addressed nuclear and ecological concerns, the grief work of planetary loss, and the gifts of deep time vision. Her writing, teaching, and thinking reflect a unique understanding of causality, integrating insights from Buddhist thought and modern systems theory. A high-profile speaker and prolific writer, Joanna has shared her teachings in numerous articles and interviews and in her thirteen books, which include in-depth facilitator guides, her dissertation on mutual causality, a personal memoir, and translations of Rainer Maria Rilke poems.

Much of Joanna’s work was developed and tested in the 1980s in the United Kingdom, Germany, and Australia, where peace and environmental activists were resisting nuclear weapons and rainforest destruction. In these early workshops, Joanna, in concert with others, came up with many of her most well-known teaching exercises that have now spread around the world: the Council of All Beings, the Truth Mandala, and Harvesting the Gifts of the Ancestors, among others. Today, her work and thought are being applied at all levels in government policy, activist training, and sustainability projects. Climate activists with Extinction Rebellion are the latest in this decades long legacy to be influenced by Joanna’s big ideas.

The challenges of our time are multiplying in focus and scale as ecological and political systems erode. Joanna encourages us to let go of the need for certainty, and even for hope.

Joanna’s unshakeable strength is based not only on solid principles of systems theory and Buddhist philosophy, but also in her own keen spiritual practice, rooted in both prophetic and contemplative religious traditions. Over and over, I have seen her willing to let her heart break open with the unmitigated suffering of the planet and its beings. In spite of overwhelm and despair, Joanna has continued to face courageously the tragic extinction of habitats and species, the poison fire of nuclear waste, the implacable challenges of climate change, and the terrifying unraveling of a safe world for beings of the future. She encourages us by the example of her undivided devotion to our dear planet.

As we worked with Joanna on A Wild Love for the World, we listened anew to her stories of the epiphanies that had revealed core insights across her ninety years. These powerful revelations and visions have guided her life choices and given her compelling stories to share. We were moved to see how her life has been shaped by a formidable sense of call and response, of listening to what is arising deep in the heart–mind. These insights have reinforced her confidence in “emergence”—that more will emerge from what is at play and that paying attention to what is emerging is a way to be guided in moving forward.

The legacy of Joanna Macy and her work has only grown more relevant as the planet hovers on the brink of collapse, with social and environmental disasters on the rise and people struggling to respond. The challenges of our time are multiplying in focus and scale as ecological and political systems erode. Joanna encourages us to let go of the need for certainty, and even for hope. As she says, “Not knowing rivets our attention on what is happening right now. And this present moment is the only time we can act, and the only time, after all, to awaken.”

Radical uncertainty requires considerable courage. It is not for the faint of heart. Joanna summons us to work from love, from a place of fearlessness, in order to open to what is right before us. She invites us all into the profound practice of mutual belonging, rooted in the living body of Earth. These gifts of courage and belonging are her legacy to us and to future generations of bodhisattvas, serving with joy to benefit all beings. On behalf of all of us who have been inspired by Joanna and her teachings, I offer my deep thanks for this beloved wisdom elder, an ocean of blessing beyond measure.

Stephanie Kaza is Professor Emerita of Environmental Studies at the University of Vermont and author of Green Buddhism: Practice and Compassionate Action in Uncertain Times. She is the editor of A Wild Love for the World: Joanna Macy and the Work of Our Time.