Of this new piece, frequent Lion contributor Josh Korda writes: “I wrote it shortly before Louis C.K. went on Conan and made a much shorter but very similar observation. I received messages including that same clip from too many people to count afterwards. So something was in the air.” 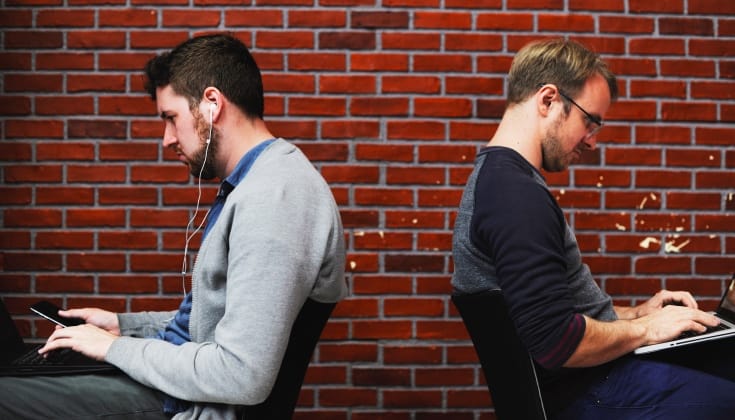 One of the most uncomfortable experiences in contemporary life seems to be waiting: we’ll do practically anything to avoid it. From the small screens of our smartphones and Internet browsers we expect immediate connection to what’s going on with our work, friends, blogs, social media pages, internet dating messages and on; a people hooked by the promise of being-in-the-loop, always available, tuned in, tied up. No wonder there’s a coffee shop selling 20-ounce acetlycholine blastoffs on every corner: Who has time to slow down?

We’re constantly fine-tuning and upgrading life towards ever greater efficiency, whereas downtime means something’s gone awry and free time is a sign of sheer, irresponsible self-indulgence. Behavior that a generation earlier was symptomatic of mania — a constant flow of shifting desires, overly ambitious plans, unlikely leaps from one conversational topic to another, inadequate attention spans, the compulsive need to be constantly on the move — is now the hallmark of a creative, “out-of-the-box” wunderkind. We’ve fetishized restlessness, turned disorder into ideals.

It boils down to a fear of hitting the pause button of life, an open period spent lingering or on standby, falling into the chasm between one task and another. The 21st-century marketing consultant or social-media guru is constantly productive, on the move but still checking in. Observe people waiting for a delayed subway today: the outrage at inconvenience is palpable, especially if the there’s no WiFi signal. What could be worse than just standing there, doing nothing, existing? When we fear boredom and idleness, we are, in essence, fearing ourselves, for those are basic core conditions of our existence.

And so we fill up delays and downtimes with anything that makes us feel engaged and productive, updating our status, buoyed by reposts of Facebook “selfies.” Or finally, as a matter of last recourse, we may find ourselves catching up with the news of the world. But even that is better than, well, simple aliveness, the experience of breathing, standing, waiting, being.

And what’s really terrifying is that at this very minute there are probably a hundred thousand startups producing a million smartphone apps for next year’s WiFi watches that will schedule us us down to the last minute and cram each of those seconds to the point of no return, so that every moment of life is monitoring everything we’ve accomplished and still how much more we could get crossed off our lists.

We work longer hours, with far less holiday- and vacation-time than our European counterparts. We actually work more hours per year more than medieval peasants! (They had a lot of downtime.) And yet the gadget and gizmo ads tell us we should be more efficient, its time to really get down to business, now’s the time to start churning out more content or fine-tuning our brand. If love, security and acceptance is to be found anywhere, the underlying message goes, its from achieving this or accomplishing that.

Somehow, in the rush of it all, few of us seem to notice that our Internet sites have the shelf-life of yogurt, and that no matter how much we clear off our desk, by tomorrow it’ll be covered again. People come hear me speak about meditation and what the Buddha taught, but what they really want to hear is how to stay on the treadmill of busyness without experiencing debilitating anxiety, which is akin to postponing swimming lessons until one is actually drowning. Another way of putting it: we can’t experience freedom if we’re chained to anything, even if its as bright and shiny as a smartphone. If we’re not ready to put down our devices for even a few minutes between one meeting and the next, allowing our brains to sit on idle for respite, we’re running our engines into the ground (but we can’t, of course, trade them in every three years). In a land where keeping busy is considered beneficial and boredom — otherwise known as feeling the basic condition of human existence — is a considered a failure and worthy of pharmaceutical treatment, productivity is no longer the means to an end, but the point of life in itself. The entire goal being to Stay Busy and You Wont Have to Feel a Thing.

And so one of the most radical, countercultural things we can do is actually just sit there and relax without feeling we’re missing out or being lax. Rather than avoiding stillness with one more tweet, we can relax into the vastness of unscheduled time; rather than avoiding silence via endless chatter we can ease into its expanse. In the space of a minute we can experience a state of rest and ease that a lifetime of effort cannot produce, as effort and productivity are stressful and agitative, not the end of stress and agitation. Taking a break can feel disconcerting, even odd and self-indulgent; creating space in life without immediately filling it. But in that space there’s something far more precious and rare than anything we’ll ever find on a screen, and it doesn’t come with a monthly surcharge.