Jan Chozen Bays on the incessant desires that fuel our confusion and suffering. 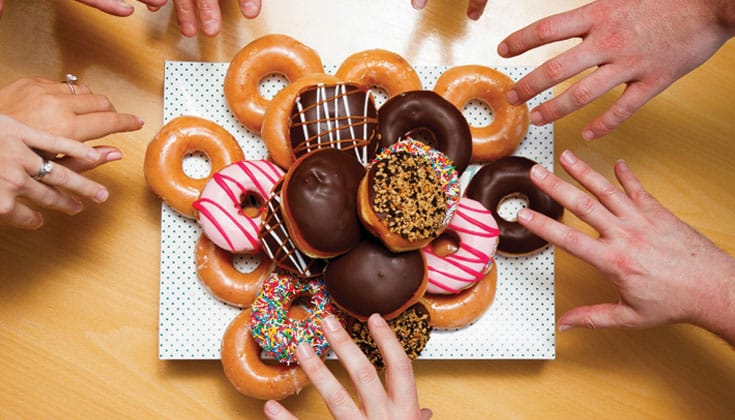 Desire. That’s what The Buddha found after six years of investigating the cause of suffering. Desire. At the end of a seven-day retreat my mind is clear enough to see it arise. I drive past a neon sign that reads “PIZZA,” and a voice in my mind says, “I want some. Let’s stop.” Then another part of my mind says, “But you just ate a big lunch. You aren’t even hungry.” Oh, yeah. Desire, triggered by one word on a sign and unrelated to my actual needs.

Desire seems to beget desire. I wanted an iPhone. I got an iPhone. Now I want a newer iPhone.

Caught by desire. It’s true of everyone, but somehow, it seems especially true of Americans. If I want it, I am entitled to it—now! Banks have enticed high school students into signing up for credit cards, and I now know many distressed young people with $25,000 to $65,000 in school loans and credit card debt but no job prospects paying more than minimum wage. Readers over a certain age will remember the quaint custom of saving money to buy something, or, if you didn’t have the money in hand, you put it on layaway, paying installments until it was yours at last.

Are we any happier now that we can buy almost anything we want and worry about how to make the payments later?

We have learned to stay in constant motion, chasing after desires, only vaguely aware of the chronic feeling of dissatisfaction and emptiness underneath.

I remember how liberating it felt when I was in Zen training and living on a small stipend. Because I had so little money, I could enter a store, buy the one thing I came for, and leave. I observed all the enticing displays with detached amusement. I could see how the marketers were trying to incite desire in my mind, creating it out of nothing. They have to do this to keep the “we-must-produce-and-consume” wheel of samsara turning, which we’ve been told is essential for our economy to be “healthy” and keep “growing.” and so we have learned to stay in constant motion, chasing after desires, only vaguely aware of the chronic feeling of dissatisfaction and emptiness underneath.

This treadmill of unending desire creates a nation of hungry ghosts. In Buddhist art, hungry ghosts are depicted with the huge swollen bellies of chronic malnutrition, but with necks so thin they cannot swallow one grain of rice without choking. It is the realm of unending craving. Hungry ghosts are not phantoms born out of the superstitious beliefs of medieval people. They are alive and starving here in America, which we often brag about as being “the most affluent society in the world.” we think we have the “goods” but actually, we don’t. We don’t have good public education, or good health care for all our citizens. We don’t provide good pay for people who teach our children. We don’t have good public transportation so people can get to their jobs, doctors, and schools. We don’t even have good food. We are poor in the essentials and rich in the nonessentials. We have second snowmobiles, third cars, a freezer full of Haagen-Dazs and a TV in every room, including the bathrooms of our McMansions.

But we don’t have happiness. Why?

The Buddha found that the source of human suffering is craving, based upon the delusion that we will be happy only if we can possess or get rid of someone or something. You can test his discovery for yourself. Pick any source of trouble in the world and see if you can trace it back to desire or craving. War? It starts with desire, desire to force others to give up their land, resources, religion, or lives. Global warming? That’s easy—desire for unlimited energy. Robbery? Political assassinations? Factory farming of animals? Child sex trafficking? Obesity epidemic? All clearly related to our drive to get more of something.

The irony is that more money or stuff does not make us more content. We humans have basic desires—for food, clean water, shelter, clothing, transportation, heat, and light. Once these basic desires are satisfied, extra money does not buy extra happiness. Most people think they would be much happier if they won the lottery, but research indicates the opposite: winners are often plagued by demanding family, friends, strangers, and scam artists. Within a year, they return to their baseline level of (un)happiness. Just look to Hollywood if you think money, fame, and adulation buys happiness.

Just before his death, the Buddha taught the eight truths of an enlightened being. The first is “having few desires.” The second is “to be easily satisfied.” These are simple but potent directions on how to unlock the prison of hungry ghosts.

A window of desire would open in my mind several times a day, especially when I was uncomfortable, proclaiming ‘Krispy Kremes!’

We start by studying desire. We watch how desire arises, exists for a while and then disappears. I don’t like doughnuts, but a few years ago I was given a Krispy Kreme. It was delicious! A window of desire would open in my mind several times a day, especially when I was uncomfortable, proclaiming “Krispy Kremes!” But because I didn’t do anything with the desire except observe it (admittedly, it helped that the nearest source of Krispy Kremes was ninety minutes away), the mind window eventually closed, and the desire disappeared.

We have to cultivate restraint in the face of desire. We’ve all had the experience of intense desire for something—an antique in a store window or an electronic device in an ad. If we can’t fulfill that desire, if we don’t feed it any mental energy, we may look back on it a week later with indifference and think, “why was i so caught up with that?” Postponing the fulfillment of desire can be revealing and empowering.

Several times a day pause and ask, “What is satisfying right now?” or ask, ‘What am I grateful for right now?’

We also have to study satisfaction. Simple satisfaction. Try sitting down and becoming aware of your body breathing, letting your mind settle, for thirty minutes. Then ask, “what more do I need at this moment?”

We can also cultivate satisfaction. Several times a day pause and ask, “What is satisfying right now?” or ask, “What am I grateful for right now?” studies show that people who keep a log of what they are grateful for each day grow measurably happier, so much so that they keep up the log after the research is done.

I suspect that we Americans will have to make a permanent adjustment to a lower standard of living than many of us have become accustomed to in the last few decades. The forces of economic downturn seem to be mating with the growing concern about how our consumption affects the earth and its other inhabitants, and this is producing people who are thriftier and more interested in a simpler lifestyle. Buddhist practice gives us the tools to develop a heart–mind that contains few desires and is easily satisfied. Then, regardless of what happens to the Dow Jones or the overall economic index, we will experience ourselves daily as among the richest people in the world.