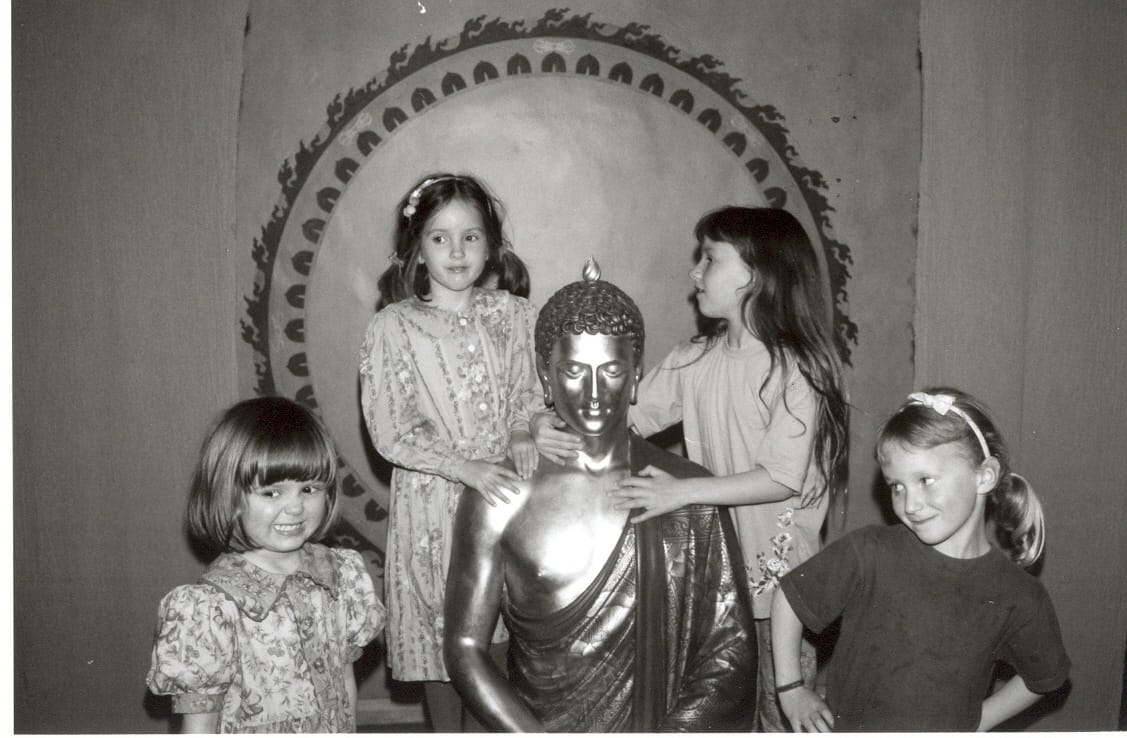 Ed Gensho Welsh, a longtime member of the Zen Community of Oregon, posted the following on BuddhistGeeks.com:

“In the USA, many couples start attending church after having a baby. And most churches have the resources to support them. In American Buddhism, the pattern appears to be the opposite: have a baby and disappear. But then, do most sanghas offer the support that churches do?”

The answer to Ed’s question is no—most Buddhist communities whose membership consists primarily of American Buddhist converts have not created ongoing ways for the whole family to participate.

However, those of us teaching in the Buddhist world have noticed a marked increase in the number of parents searching for a community to support both their personal practice and their children’s spiritual development. One reason for this uptick is that thousands of individuals have learned to meditate through Mindfulness-Based Stress Reduction (MBSR) and similar programs. Meditation is no longer looked upon as a fringe or foreign practice; in fact, in many wellness programs it’s viewed as the psychological complement to hatha yoga. Students of these programs are seeking ways to continue their practice, and a great many of them have families. As these families seek out local support, dharma centers find they have a pressing need to develop family- friendly programming, and in areas of the country in which no local center is nearby, plucky parents are starting their own.

Yet, taken as a whole, Western Buddhist dharma groups and centers are not prepared to handle this potential influx. Many have begun thinking about forming family programs but are uncertain where to begin. Others have started programs, but these may wax and wane depending on the time and energy of the volunteer parent who typically heads it. Moreover, we Western Buddhists are simply so new to family programming that we have yet to create enduring educational structures and curricula.

To figure out what a robust and sustainable program for families would look like, we need to turn the tables. Rather than appending a family program to a preexisting dharma group, we could ask, what would a community that serves only families look like? For the past three years, I have been experimenting with developing a family-centered Buddhist community in Durham, North Carolina. Through trial and error, an organizational framework has emerged that can help both inform the  establishment of other family-centered Buddhist communities and provide ideas for existing dharma centers considering family programs of their own.

The Buddhist Families of Durham (BFD) consists of 21 families composed of 22 women, 18 men, and 37 children, with 77 members total. Notably, in 95 percent of the families with two parents, both  attend regularly. The BFD rents space from a local Jewish center, and a Muslim center just up the street provides additional classroom space when needed. Meetings take place Sundays from 10:30 a.m. to noon, the one time during the week when families have little on the calendar—no soccer practice, birthday parties, or violin recitals. Meeting weekly, rather than monthly or bimonthly, provides the  regularity needed to more deeply instill learning and develop meaningful relationships. Since families are not always able to attend weekly, less frequent meetings often meant they could go for a month or more without participating. Because children go to different schools during the week, frequent meetings have helped them develop friendships that keep them coming back.
The meetings begin with an informal social period and snacks for the kids. (At one point, we attempted to ax the snacks, but the kids objected loudly and said they come in part for the food.) We then gather in the sanctuary for a child-led, ten-minute opening ceremony and singing. After this, the kids break up into three classes—preschool, elementary, and middle—for what we call Sati (Mindfulness) School. During that hour, parents meditate together, followed by a short dharma talk from me and discussion in small groups.

We practice vipassana meditation and draw from teachings in the Theravada tradition, with additional readings from other lineages, particularly from Thich Nhat Hanh’s work. The community is built on three organizational guidelines. First, the program pays equal attention to the parents and children. Parents may not drop their children off for Sunday school and speed over to a coffee shop to catch up on email. It is problematic to teach children how to be more mindful, connected, and emotionally intelligent while parents continue on with old dysfunctional habits. A meditative program for the adults helps them not only become more mindful, peaceful parents but also trains them to become models and teachers for their children at home.

Additionally, parents need a forum to explore the relationship between parenting and spiritual practice and to connect with other parents for spiritual friendship, learning, and problem solving.

The second guideline is that the adult curriculum runs parallel to the children’s so that everyone learns the same teachings around the same time. For example, last winter the adults studied and put into practice each of the five precepts/mindfulness trainings one week before the children’s classes. Tandem learning allows parents to extend their children’s learning at home throughout the week and to integrate new habits into the family as a whole. We also found that parents had less apprehension about what their children were learning with regard to Buddhist teachings when they had absorbed and understood the material themselves.

Though still evolving, this is one model for creating a program that works for parents and children equally. Buddhism in the West will be strengthened considerably if more family-centered Buddhist communities spring up across the country and if existing centers put more resources into working with families. Such groups and programs would in no way be meant to supplant adult meditation groups but rather to diversify communities to better meet peoplewhere they are in life. Over time, teens and empty-nester parents aging out of family programs will surely continue on their path at retreat centers and adult sitting groups.

The third guideline that helped our community coalesce and flourish was the hiring of outside (nonmember) teachers for the children’s program. In our first year, we experimented with parents teaching the children’s class. Parents complained that during their six-week teaching commitment, they felt “exiled” and disconnected from the parent group. Many of us also lacked classroom-management skills and finished our lessons feeling exhausted and stressed. In the end, the parents were so desperate for a little quiet time to meditate that they were willing to pay good money for someone else to teach. We found that paid teachers, as opposed to volunteers, resulted in consistent teacher attendance (few last-minute cancellations), clearer classroom expectations, and continuity of lesson planning. We hired only those with prior classroom teaching experience. As a result of the calmer, more stable classroom environment, children are learning more. The children’s program offers much more than child care, providing high-quality and enjoyable lesson plans. Families donate $40 per month; our three teachers receive $50 each Sunday and annual bonuses.

Though still evolving, this is one model for creating a program that works for parents and children equally. Buddhism in the West will be strengthened considerably if more family-centered Buddhist communities spring up across the country and if existing centers put more resources into working with families. Such groups and programs would in no way be meant to supplant adult meditation groups but rather to diversify communities to better meet people where they are in life. Over time, teens and empty-nester parents aging out of family programs will surely continue on their path at retreat centers and adult sitting groups.

If Western Buddhist converts begin to focus more on families, we will engage not just one but two generations: as we support young-adult parents, we will also lay the foundation for a succeeding generation. This is Western Buddhism’s next big step, if we have the energy and vision to take it.