Zenju Earthlyn Manuel’s deepest vow is to be a person who doesn’t cause suffering and walks in peace. It’s what we all really want. Here’s the story of how she lives her vow as a black woman and Zen priest. 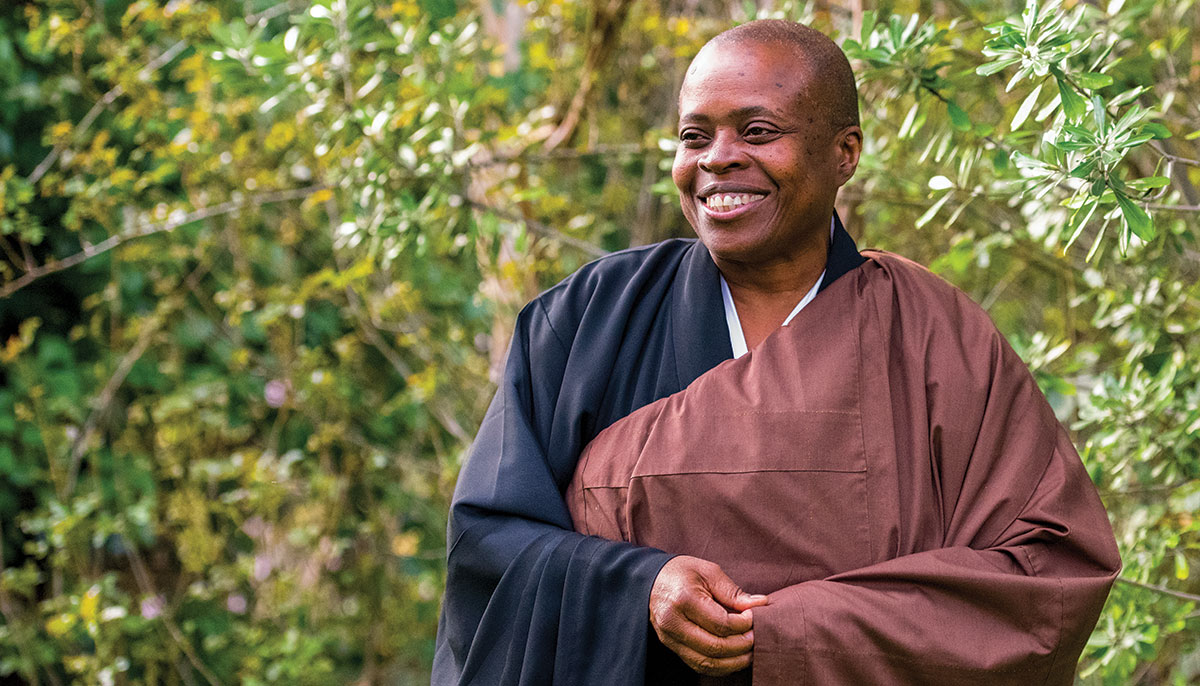 Becoming a Zen priest was never about becoming someone other than who I was. I was well aware that I would never be able to escape myself. Instead, in walking the path of Buddha, in living a life of vow, I found I was more present than ever. I was everywhere.

I would see myself in sitting meditation, a little black-girl-me in braids with satin ribbons sitting in church singing hymns. I would see myself standing in the Zen garden, a black militant teenager aligned with the Black Panther Party. There in the corners of the zendo was the college-philosopher-me with the sharp tongue of a Pan-Africanist. As I washed my Zen bowls, I felt myself as a poet, a sister, a daughter to migrants from rural Louisiana, an auntie who offered prayers and affirmation to the children in my family. In the memorial ceremony for Zen teacher Suzuki Roshi, I felt myself drumming Congolese rhythms.

We live at a time when there is no room for doubt.

Behind the many expressions of my life, what I saw were the eyes of another inside me, but she had no name. All she had was a knowing that there was more than what she saw and experienced in the world.

In the buddha hall, this other me stood back without a name and moved with ease to offer incense while leaping across rivers of black cushions, her eyes steady and turned inward. Her bowing took her deep into the earth, where she gathered fortitude. Her palms were joined in honor of the royal ones in her own blood lineage and the lineage of Buddha. This one with no name was grateful for a temple to weep in, to feel the softness of her own vulnerable heart, and to have faith in the awakening of all beings.

It was that me without a name, that had not been born, that was willing to kneel down in the buddha hall of the San Francisco Zen Center in 2008 and received the vows of a novice Zen priest. I had been given the name Ekai Zenju (ocean of wisdom, complete tenderness) by my teacher, but the hands that received the bowl, the robes, and the lineage papers could not be identified. In fact, the hands soon disappeared and there were only the gifts suspended in the air.

Ten years later, I received my dharma transmission to become a Zen teacher. Yet I experienced a strange sensation: I had not come to the end. And the one without a name knew there was no end.

I had come to this part of the path without any accomplishments that family and friends would understand, without any fanfare from the world at large, without recognition from the black community I lived in all of my life. Yet there was a complete awakening to life within this great loss of all that I had held onto for many lifetimes. This untethered life, protected in robes, was living the life of vow.

When I became a novice Zen priest, my teacher, the late Zenkei Blanche Hartman, looked me in the eyes and said in a quiet grandmother voice, “You are a student of the Buddha, and he only wanted one thing.” She paused to make sure I heard what she said. “He only wanted us to see.”

Then she spoke of the basic goodness of others. This is what she said she saw in humanity. The teaching was so simple, but difficult for me to take in. Then again, all of Buddha’s teachings are simple and difficult. What goodness was she speaking of? With all the horror in the world, the basic goodness in others seemed to be something of a fairy tale, or empty hope.

The idea of goodness coming from her rubbed up against old wounds of feeling myself as a “sinner” from my Christian upbringing. Was I good, given I was capable of causing others to suffer, and sometimes to a great extent? Was I good, even though I lied, misused sexuality, and stole a few things in my past? Did being good mean being merciful like Jesus and gracious like Buddha? Was it being what I didn’t want to be—to be seen as a goody-two-shoes walking around in robes?

Years later, after sitting and sitting and sitting and “being good,” I discovered that the goodness she spoke of wasn’t about behavior. One who receives or tries to follow the vows (even if they are not ordained) isn’t suddenly a “good” person. We don’t follow the vows to please each other, or to be better white people or better black people, or to be better people in general. Living the vows doesn’t even mean you have to or can accomplish anything, or that you can teach folks to be good people if you have been sanctioned to teach.

The goodness in everyone, revealed or not, is the devotion, the love, the enthusiasm to love all of life as much as we love to walk in the woods or by the ocean. We love being close to who we are, to feel our stillness within all that weighs heavy on us, or at least to have the time to sit with the heavy until it is understood as material for our own liberation.

In long, silent retreats that offer stillness, we are supported, with good food and a place to sleep, to be still and breathe. I may laugh, cry, and become enraged at the things people say and do, yet I can sense in many of them the same love to sit like a tree and listen. It is only in the state of such stillness that I come to discover that the me with no name is nature itself. Living a life of vows is to sit in the nature of oneself and others, to love life, and to engage and respond to the world through such love.

It wasn’t until I officiated my first Jukai ceremony—lay initiation for students—that living a life of vows came into full view. It wasn’t about me, name or no name. Through tears, I saw my black students move with so much courage, hand in hand, heart to heart, enacting and embodying liberation through vows. Not liberation from something, but liberation into being the body of nature, being the earth, that they are.

It was difficult to stop crying during the ceremony as I said these words: “Abiding according to the ten grave precepts, even after realizing buddhahood, will you continuously observe them?” To which the initiates replied: “Yes, I will.” Hearing their devotion to awakening, I was deeply moved to stand at the gate and usher in those who want to live free, filled with love, and be protected from harm in doing so. The gateway need not be Zen or Buddhist; it can be any gateway of freedom that emerges in one’s life. Whatever you are devoted to is what you are living as your vow. Devotion means “of vow.”

Throughout life, awakening is cultivated through our conscious vow to be that person who does not cause suffering and freely walks in peace. In this way, we can all live a life of vow, enthusiastically, without reason, and perhaps without knowing each other’s name.

We live at a time when there is no room for doubt. We are being pushed to continue our devotion to whatever holds us upright, clears our eyes of debris, holds our feet to the fire built by our ancestors, and drops us back into the wilderness, no matter how frightening. This is the life of vow.