Boston newcomer Brian Arundel struggles to make sense of the locals’ reckless driving, knack for obscenities, and seeming disregard for the welfare of strangers. 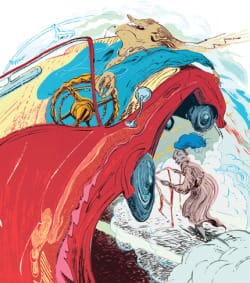 “If we learn to open our hearts, anyone, includ­ing the people who drive us crazy, can be our teacher.” —Pema Chödrön

There’s this thing that drivers do here when the light turns green: shoot out and turn left in front of you, before you can make it through the inter­section. My fellow transplants call it the “Boston left,” and it’s so engrained in local culture that it’s actually more common than not. Recently I consulted the Massachusetts driver’s manual, suspecting that rules of the road were different here than in the rest of the country. But no, it’s right there on page 95: “When making any left turn, you must first yield the right-of-way to any oncoming vehicle.” Yet if you have the audacity to follow the rules and drive straight through, preventing the other driver from executing the turn, you will quickly discover the creative genius of a native Bostonian’s obscenities.

Admittedly, this is a small thing, but on a daily basis, at nearly every traffic light, it adds up. Besides, the Boston left is just the tip of the iceberg.

Where else in winter do residents mark shov­eled parking spaces with orange traffic cones? Or with chairs, coffee tables, shopping carts, and baby strollers? Although the cones do contrib­ute color to otherwise bleak winter streets, I had failed to understand the logic of the practice until a neighbor filled me in: Because he had done all the work to shovel a spot, he explained, he didn’t want someone else coming along and taking it. I suggested that none of us actually owns the street, and if everyone thought like he did there would be nowhere to park when it snowed. If, on the other hand, we all shoveled out our cars and left a spot vacant for the next driver—as people do in the rest of the country—we’d minimize the inconveniences of winter parking. I received only a confused stare.

I’ve been actively practicing Buddhism since 1999, and in that time I’ve lived in five differ­ent cities and on both coasts. Buddhist practice steadied me after I’d spun downward into depres­sion and substance abuse, and it remains my con­stant guide regardless of tradition or how often the scenery of my life changes. I studied Zen in Maine, Kagyu in Seattle, Gelug in Oregon. My first experience with Vipassana was at the Seattle Insight Meditation Society, led by Rodney Smith. Over the years, somewhat like a Buddhist Goldilocks, I found Zen and Tibetan a bit too extreme but Vipassana just right. And until the last relocation, I’d convinced myself that I was making progress.

Then four years ago I moved to Boston, and I quickly concluded that life was easier everywhere else. It’s not only the illegal turns and the mark­ing of territory; the problem runs deeper than that. Once you cross the Charles River, things change.

Last week during a brief walk from my work to the library at Copley Square, I watched a guy in a pickup truck nearly run over a much older man who was crossing on a “walk” signal. When the pedestrian meekly objected, the driver abruptly stopped in the intersection, climbed out of the truck amid honking horns, and raised his fist toward the old man, threatening to pummel him. At the next corner, a man in his twenties screamed obscenities at a group of uniformed schoolgirls while the driver of an errant van gave a pedestrian the finger as he drove by (an act I’d seen a few days earlier performed just as impressively by a priest). Minutes later, I was confronted by a woman inexplicably yelling at me, “Go back to the f**king nasty Italians.” Not that it matters but I’m actually Scotch-Irish, although my wife is from Rome.

It didn’t take me long after moving here to suspect that Boston had peaked during the Revolution and has plunged downhill ever since. Take the subway, or what Bostonians call the T. Riders regularly claim seats reserved for the disabled while elderly passengers stand nearby, often objecting to no avail. Most have yet to master the basic etiquette of waiting to board until others exit the train—an act less of com­mon decency than practical efficiency, not unlike rules of the road. The modus operandi seems to be: When a train arrives, push to the front of the platform, board, and immediately stop moving once you’re in, even if you’re blocking a dozen folks behind you. There seems to be a very short, pardon the pun, train of thought.

Little regard is paid to the most basic social graces; any attempt (presumably by “outsiders”) to form a line quickly devolves into mob rule. Fundamental lessons in social taboos that most of us learned early on—one shouldn’t hurl racist labels, spit on sidewalks, or scratch genitals in public, for instance—skipped Beantown. I’m not talking about violent crimes, or incidents of road rage that end with baseball bats in parking lots, or subway confrontations that precede a stab­bing, to note recent current events. I’m talking more about fundamental attitudes that suggest an individual’s apparent inability to think of the greater good. For example, when ambulances or police cars approach from behind with sirens blaring, it’s customary in other cities to pull to the side of the road, even if it means losing your spot in traffic.

I don’t know why these lessons skipped Boston, and I don’t understand how residents cope. Is this all they know and so assume it’s normal? Or do Bostonians acknowledge their collective condition and simply steel themselves to face the chaos each morning? What I do know is that if you’re not from here, it’s very difficult to adjust.

OK, it’s not like I’m living in the midst of an African civil war or military crackdown in the Middle East, and I understand that this conflict consists more of frustration than actual danger. But shouldn’t we expect better from the city that calls itself “The Hub of the Universe”? Boston is, after all, the birthplace of our democracy. Is modern Boston’s rebellion against social graces actually a remnant of its original spirit of revo­lution? Or did history simply rewrite the Boston Tea Party as a political protest instead of conve­nient littering?

I’m not alone in my frustration. A recent American Psychologist article, “Does It Matter Where We Live? The Urban Psychology of Character Strengths,” confirms my suspicions. The authors, University of Michigan psycholo­gists Nansook Park and Christopher Peterson, surveyed the fifty largest U.S. cities for “head strengths”—defined as creativity, curiosity, judg­ment, and love of learning—as well as “heart strengths,” or forgiveness, gratitude, love, kind­ness, and cooperation. For heart strengths, Boston came in dead last. Yes, below Los Angeles, New York, even Philadelphia, home of sports fans who indulge in targeted vomiting. (Sadly, Beantown ranked twenty-ninth in head strengths, suggesting that we Bostonians don’t necessarily strike a balance between intellect and emotion, but that’s another story.) Essentially, Boston is America’s least emotionally evolved major city.

Yet validation didn’t solve my dilemma; some­thing had to be done. I couldn’t ride a Green Line train every day in a suit of emotional armor, closing myself off in anticipation of anarchy. Was there some way to come to terms with the native population without exhausting my paycheck on therapy?

Eventually I realized what should have been obvious all along—my frustration with my community pointed back to me. What needed to change wasn’t so much Boston; it was my attitude toward Boston. I had to stop wanting everyone to behave as I thought they should, according to my desires. Simply put, I needed to learn tolerance. As the Dalai Lama says, “In the practice of tolerance, one’s enemy is the best teacher.” Clearly, Bostonians would have to become my teachers.

The isolation I’d inflicted upon myself (and which I’d blamed on my neighbors) had sup­pressed my own inner development, I now real­ized. Observing this showed me how far I still needed to go toward experiencing any kind of freedom. Yet I also felt that the realization rep­resented an important step in my journey.

I now pay close attention to my reactions to rude behavior. When I’m shoved aside by another commuter dashing into a virtually empty sub­way car, I’ll notice my teeth clench and feel my stomach tighten. Other times, I might observe myself withdrawing into a kind of numbness, as if this could insulate me against life. And I often remind myself to observe my indignation at oth­ers’ behavior and let it go. Observe it and let it pass without grasping or pushing it away.

I have to remember that these reactions aren’t me, nor are they lasting; they’re just energy rising and falling, like everything else. I’m not going to blame them on others, or myself, for that mat­ter, although I sincerely hope the reactions will recede in time.

The armor I’ve been wearing to ward off Bostonian behavior has gradually, albeit not completely, softened. While I won’t claim I now hug my neighbors—and I still react irrational­ity to the Boston left—my attitude is changing. I’m beginning to develop some perspective on my situation. My frustration reminds me of the spiritual path I’m on, as well as how far I still need to travel upon it.

The Dalai Lama says that our enemies give us the most crucial opportunities to grow. So maybe I should thank Bostonians. Had I stayed on the West Coast, where people are more polite, well-mannered, and, well, cultured, I may have become complacent in my delusion.

This I know: we’re all in the same boat. One simple, singular goal unites us: we all want to be happy. We arise each morning and face the day as best we can, negotiating the joy and suffering life may bring until the sunsets finally stop. So who am I to judge others? And why would I know­ingly increase the distance among us?

So thank you, Boston. Thank you for being America’s least friendly city, because it also makes you a dynamic teacher. For every screamed obscenity I’m subjected to at Copley Square, for every irrational driver and self-righteous, bellow­ing sports fan I encounter, I will try to offer grat­itude and extend loving-kindness. I may never learn to embrace the orange traffic cones, but I will practice politeness and compassion and sur­render my seat on the T without judging those who don’t, because I know that we can help one another. As Pema Chödrön says, “We work on ourselves in order to help others, but also we help others in order to work on ourselves.” It makes no difference that Pema probably never rode the Green Line.

Brian Arundel is a book editor and writer whose fiction and nonfiction essays have appeared in a number of literary journals. His play, Sam, Sara, Etc., is forthcoming from Červená Barva Press.