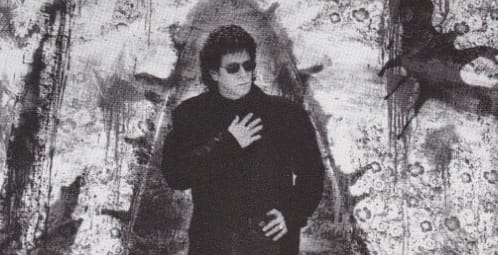 Reed in a detail from the cover of “Magic & Loss,” his 1992 rumination on death, guilt, and hope.

The story of his demise, some said, was greatly exaggerated – but it turned out that the idea of Reed’s death being a hoax was a hoax itself; Reed, who had had an emergency liver transplant in May 0f 2013, had indeed passed. He was 71.

Reed was not a Buddhist – “But I’d like to be,” the Telegraph’s Mick Brown quotes him — but he did study meditation with Yongey Mingyur Rinpoche. “He teaches Buddhist philosophy,” Reed told the London Times, acknowledging the connection, “so I’m a student of Buddhist philosophy. If he was teaching table tennis I would learn that.” Despite the lack of label, Reed helped to raise funds for Mingyur-related programs and also Tibet House, contributed his voice to the narration of the film Brilliant Moon: Glimpses of Dilgo Khyentse Rinpoche, and even once played “Perfect Day” for the Karmapa. He was also a serious practitioner of t’ai chi, and made an album of music specifically for meditation and meditative movement. But even putting these things aside, and perhaps, too, his legendary cantankerousness (when I insisted on shaking my idol’s hand at an in-store event years back, it was like holding a handful of limp green beans — and he made a face to match), he had the kind of frankness and fearlessness that many a dharma student would admire.

That frankness and fearlessness was evident, for example, on harrowing later-Reed works like Magic & Loss, an album-length reflection of the loss of two dear friends (one being the legendary songwriter Doc Pomus), and Set the Twilight Reeling, an unflinching look by Reed into his own mirror as he tries to find his way in his autumn years. (The album also includes “Adventurer,” a tribute to Laurie Anderson, his then-newish love, who would prove to be not just his muse but his equal.) Standoffishness and petulance may have been Reed hallmarks in public and in the press. But in his work? Aging, illness (Reed was famously indulgent with narcotics in the first half of his career), death, identity, gender identity, the meaning of art, the meaning of life — he was never afraid to address these things there. All of it was fair game.

Post-script: this remembrance of Lou by Okkervil River’s Will Sheff is way too good to miss.