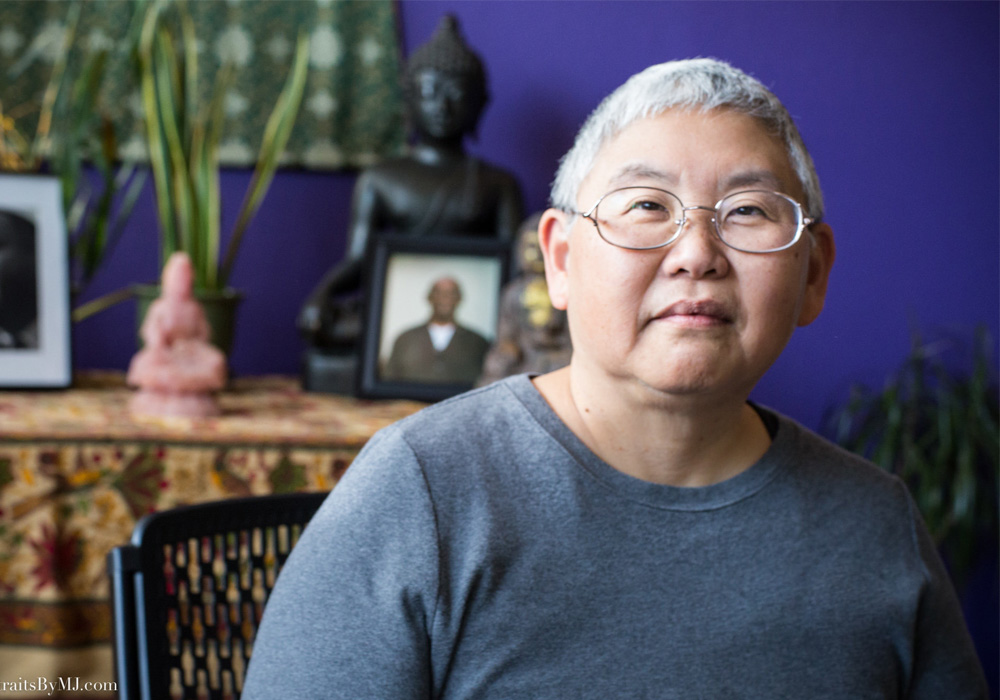 I was born on New Year’s Day in 1954 and grew up in a Japanese American family in the Midwest U.S. At age eight, the Cold War nuclear threat led to existential despair for which the only relief proved to be art and writing poetry. This despair later turned me toward Zen training and temple building. After dharma wanderings through the U.S., Canada, and Mexico, I practiced in monasteries in South Korea, and then washed back up on the shores of Northern California. Along with two marriages and frequent bouts of poverty over the years, I raised my son, was published as a poet, and connected with spiritual and activist friends working for justice and peace.

Since 2007, I have been teaching and working at the East Bay Meditation Center in Oakland, and doing anti-racism work as an independent consultant. I was the recipient of an honorary doctorate of sacred theology in 2015 from the Starr King School for the Ministry, and received a Global Diversity Leadership Award in 2017 from the HRD Congress in Mumbai, India.

I entered the dharma through Korean Zen and have practiced Japanese Soto and Rinzai Zen along the way, before being exposed to vipassana meditation and Theravada Buddhism.

What are you working on now?

Planning a series of brief educational videos on socioeconomic class myths and dismantling classism, with my colleague Davey Shlasko of Think Again Training.

The Body Keeps the Score: Brain, Mind, and Body in the Healing of Trauma, by Dr. Bessel van der Kolk.

Being served a perfectly prepared cup of PG Tips tea by my son.

Being trapped in a shopping mall with people discussing shopping and TV personalities.

Crawling on the roof of a chain burger joint to scrape huge amounts of hamburger grease sludge into a sagging cardboard box.

A pine tree, a flower, and an airplane. Those are all things I worked on becoming during koan practice. I loved being a pine tree and a flower. I hated being an airplane and was very bad at it.

Ven. Bhante Suhita Dharma, the first African American to be ordained as a Buddhist monk; Alicia Garza, one of the founders of the Black Lives Matter movement; Rev. Mary Jiko Nakade, the priest of Daifukuji Soto Zen Mission Temple in Hawai’i.

I rarely experience guilt, and certainly never because of pleasure.