Kobun Chino came to America in 1967 at the request of Suzuki Roshi and spent the next thirty-five years helping spread the dharma in the West. Shoho Michael Newhall recalls his teacher’s life. 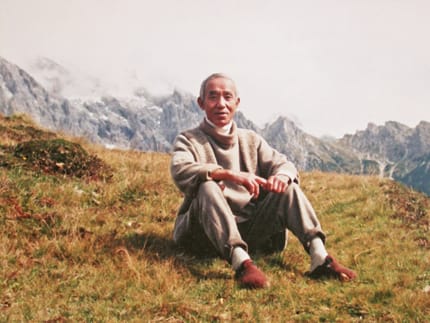 Kobun Chino Otokawa Roshi, who is often referred to simply as Kobun, was born to an esteemed temple family in the mountainous snow country of Japan. He was a gifted young man, practiced with Koto Sawaki in Kyoto, had advanced degrees in Buddhist studies, was famously adept at calligraphy, practiced kyudo, music, art, and taught the dharma. He also spoke English, albeit with a soft, spacious, poetic style, one that apparently was unique even in his native Japan

In 1967, upon finishing monastic training at Eihei-ji Monastery, Kobun was about to return to ordinary temple life in Japan when he answered a request from Suzuki Roshi to come to California to help with American Zen students. Katagiri Roshi also came from Japan to San Francisco Zen Center at that time. For both of them it must have been a culture shock. Their transition from quiet monastic settings brought them to a location very close to Haight-Ashbury in its wild prime.

In the summer of 2002, in an alpine village in Switzerland, Kobun died in a drowning accident along with his daughter Maya. This year, the tenth anniversary of his death, his legacy is being commemorated with ceremonies, celebrations, the archiving of his teaching and calligraphy, and the development of various publications.