Buddhist teacher Andrew Holecek says virtual reality, just like lucid dreaming, could be an opportunity to investigate the mind — or it could be “super samsara.” 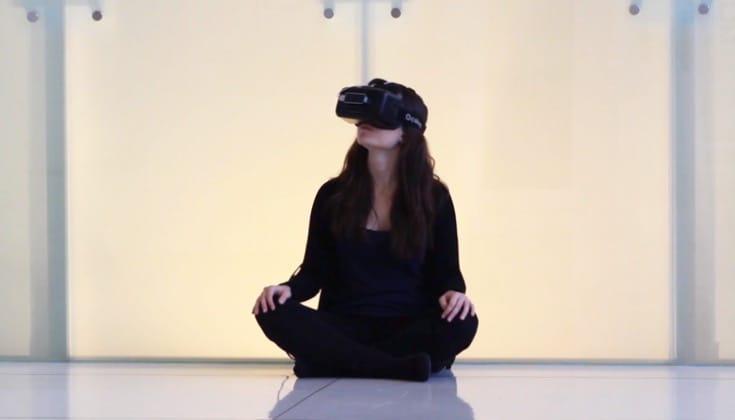 What do dreams and video games have to do with Tibetan Buddhism? For one thing, they all introduce us to “dereification” — the creeping feeling that reality isn’t as solid as we might think. For another, they will all come together at a workshop led by Buddhist teacher and lucid dreaming expert Andrew Holecek at Shambhala Mountain Center next week, where new research on the subject will be unveilled.

Holecek will explore “dream yoga,” the Tibetan Buddhist practice of meditating in a lucid dream. In his 2016 book, Dream Yoga: Illuminating Your Life Through Lucid Dreaming and the Tibetan Yogas of Sleep, Holecek blended traditional Buddhist teachings with modern sleep science research. Now he’s looking at how to further incorporate Western knowledge with the ancient tradition by exploring the potential of virtual reality.

Earlier this year, Holecek was approached by researchers from Naropa University’s Cognitive Affective Science Lab. The researchers were studying the relationship between lucidity — the ability to differentiate between what is real and unreal — and emotions. They hypothesized that people with greater lucidity would have a better relationship with their emotions. To test the hypothesis, they recruited research participants with a predisposition to lucidity, including lucid dreamers like Holecek. Then they put the participants in uncomfortable situations using virtual reality and observed the participants’ responses.

“When you slip between these two realities — virtual reality and reality — you have a hard time determining which one is real.”

Virtual reality (VR) is a burgeoning field of technology that uses a headset to immerse the user in a digital environment. It’s popular for entertainment and video games, but innovators are seeing potential for it in other fields — including Buddhism.

At Holecek’s workshop, the researchers from Naropa will present on their findings and invite attendees to participate in their research. Holecek envisions many more opportunities for collaboration between Buddhists and VR developers.

“Virtual reality, like lucid dreams, can either wake us up to the nature of reality, or pull us further into delusion,” he says. “How do you use it for the purpose of awakening? How can we use cyberspace as a lab for exploring the mind?”

“There’s a lot of confluence with Buddhist thought,” says Holecek. “We can use these technologies in a way that wakes us up instead of hurling us deeper down the rabbit hole.”

In a feature on dream yoga in Buddhadharma: The Practitioner’s Quarterly, Holecek explained that in lucid dreaming you can watch objects shift shapes, and also confront your nightmares — both of which can help you discern reality from illusion in your waking life. But the vividly real experience of VR can have a dangerous side. In the case of VR, the illusion of realism is known as “presence,” and Holecek thinks it can be problematic.

If we engage with virtual reality and lucid dreams mindfully, Holecek says, we can discover wisdom.

“Cyberspace can be disembodied headspace,” says Holecek. “Presence in that regard is cognitive presence. It’s the same type of presence you can have when you’re in a lucid dream.”

If you get too attached to cognitive presence, you lose touch with your body and your world. When you’re strongly attached to that immersive virtual reality and then take off your headset, the experience can be quite jarring — your sense of reality and illusion is shaken.

“When you slip between these two realities — virtual reality and reality — you have a hard time determining which one is real. When you come out of that experience, your world is dereified. It doesn’t really feel all that great. That is the experience of ego being threatened. It’s a very powerful intimation of teachings on emptiness.”

On the flip side, if we engage with virtual reality and lucid dreams mindfully, says Holecek, we can discover wisdom. In his book on dream yoga, Holecek quotes Tarthang Tulku Rinpoche to explain:

“Experiences we gain from practices we do during our dream time can be brought into our daytime experience. For example, we can learn to change the frightening images we see in our dreams into peaceful forms. Using the same process, we can transmute negative emotions we feel during the daytime into increased awareness.”

Holecek sees the same potential for virtual reality, and he hopes to parlay that vision into a virtual reality program that teaches the principles of dream yoga. He theorizes that it could serve as a learning aid, so practitioners could more easily learn to wake up and practice meditation in their dreams. Next week, he’ll meet with Tibetan Buddhist lamas to ask for their blessing and their counsel.

Holecek isn’t the first Buddhist to see an overlap between Buddhist practice and VR. Researchers at MIT have studied how virtual reality could be used in mindfulness training. And, in an article in Lion’s Roar magazine, Vincent Horn — cofounder of Buddhist Geeks and Meditate.io — argued that virtual reality posts a challenge for Buddhists to build digital technology that empowers wisdom and helps users practice the dharma.