Zen teacher Benjamin Mui Pumphrey on appreciating not just the rare birds, but also the sparrows and crows. 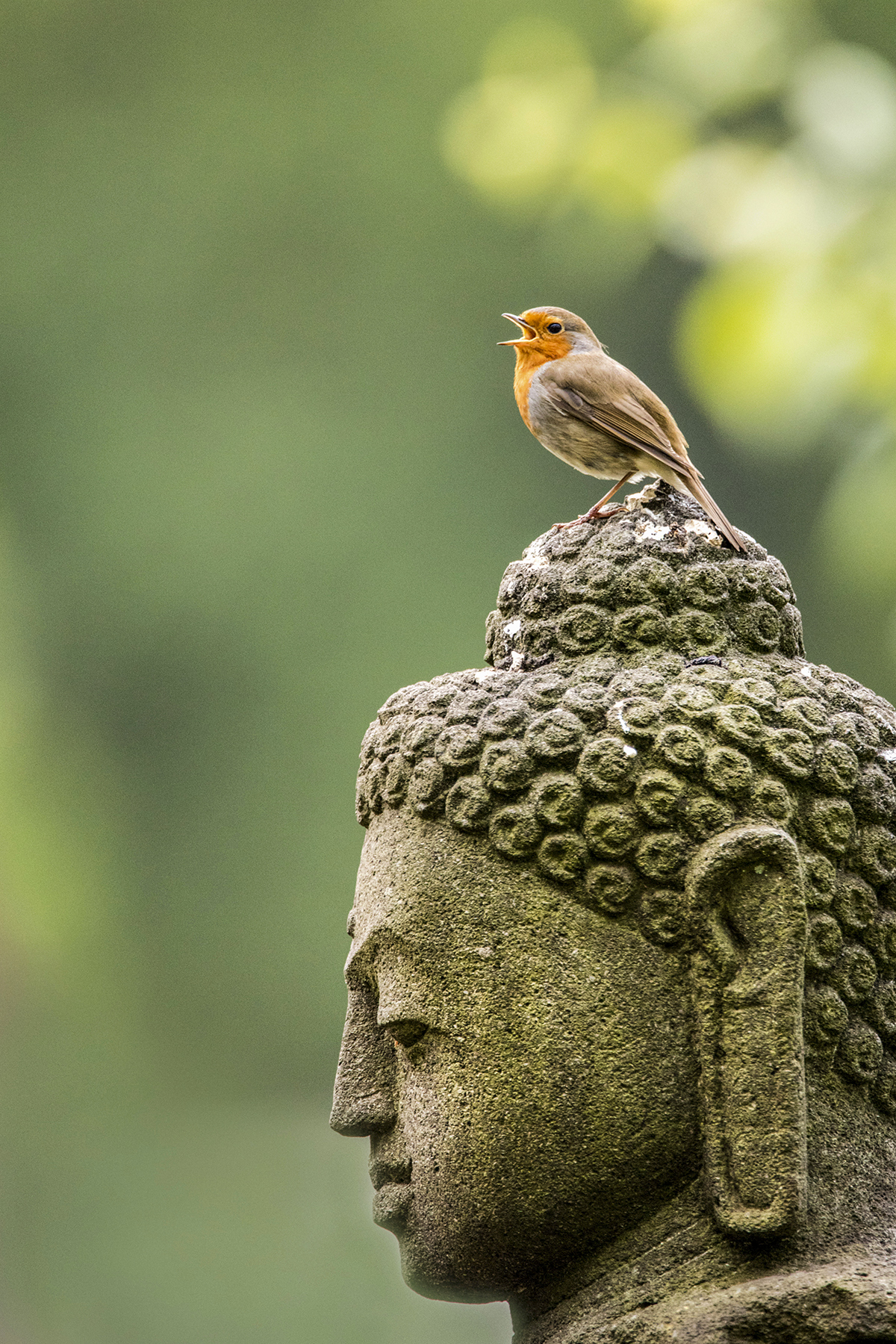 After catching the birding bug, I discovered that many local birders where I live in Virginia’s Shenandoah Valley have been maintaining a formal hawk watch for decades. The Blue Ridge Mountains serve as a well-traveled north-to-south migration route in the fall for raptors of all varieties. The hawks, eagles, and falcons that migrate through this highway gain altitude by circling and rising, buoyed by hot-air thermals along the mountain ridges before coasting southward.

Broad-winged hawks sometimes fly through in staggering numbers. The broad-wings may appear as huge, rising, circling masses of birds called kettles or as long, seemingly endless streams of black silhouettes chained together. At the mid-September peak, there may be dozens of birders pointing their binoculars overhead and excitedly calling out what they see to each other. On slower days, the hawk watch may consist of only one or two hawk-watch counters, diligently recording every migrating bird passing by.

Sitting and watching, sitting and watching. The similarities between birding and Buddhist meditation are startling. In meditation, we watch our thoughts arise then let them settle. We meditate in stillness because movement stirs up thoughts like warm air adds energy to kettling birds. More thoughts inevitably arise, because thinking is what brains do, and we let those streaming thoughts settle, too. We do this over and over, year after year.

To see birds, we also sit quietly and watch. Too much movement and the birds scatter. We focus on little movements in the sky, trees, or bushes and, if there’s nothing particular to continue attending to, we soften our focus again and keep watching. Sometimes we get lucky and see something interesting, maybe a grosbeak or hummingbird. Often, no sooner do we see a bird than it flies away. We sit some more and watch every movement, listening to every sound, for the next bird.

For me, discovering birding was the discovery of seeing again. Birds are everywhere, and I hadn’t really noticed them before. When I saw my first warbler, a black-throated green warbler high in the trees around my house, I was spellbound by the tiny colors dancing around the treetops. Once I saw that first one, I soon noticed maybe ten more hopping from branch to branch. Had they been there every spring?

A few weeks later, I noticed a blackburnian warbler high in the dying crown of a northern red oak beside our house. It looked foreign there, like something out of the tropics, setting gray branches ablaze against a slate-gray sky. The blackburnian seems built to be unmistakable, yet I’d never even known such a bird existed. Like so many other birds, it was gone almost as soon as it appeared, and I haven’t seen one at our house since.

After I spot some uncommon bird and it disappears, I must accept that it has moved on. It’s the same as when we experience kensho, a rare moment of indescribable clarity when all discrimination disappears. After kensho fades, we don’t give up our Zen practice, thinking we’ve seen all that Zen has to offer. The process of spotting fantastic new birds and continuing to refine our approach makes us better birders. The process of catching a glimpse of kensho and yet continuing to refine our practice makes us better Zen practitioners.

How many of us would continue birding if at every outing we merely saw the same robins, cardinals, and chickadees that we saw the last time? How many of us would make a lifelong hobby of that? We’re all too easily misled into thinking that value is to be found in the novel at the expense of the ordinary—the rare birds at the expense of the sparrows. But Zen practice helps us discover the profound and subtle radiance of the world.

In our Zen practice, something very unusual and unexpected happens if we persist with it long enough. We may initially be drawn to Zen after hearing stories of awakening experiences or other more psychological or physical benefits that might arise as effects of meditation. But as we continue with Zen, we learn to see again. We learn to be in the world again, more fully. “Just another vulture” becomes “Vulture!” “Crow” becomes “Crow!” We also see each other freshly, for the first time, each time. In this way, our Zen practice ripples into our interpersonal lives. Whether at home, at work, or out around town, “You again” becomes “You! Again! Hello!”

One day at the hawk watch, several of us spotted a large bird, a dot in the distance. One young man, an expert birder, immediately called out, “That’s a golden eagle,” without even lifting his binoculars to his eyes. Confidently identifying something as rare in western Virginia as a golden eagle, at a great distance, without binoculars, is a real feat. The more experienced birders who knew this young man reacted to his identification as if he’d just stated something as plain as “the sky is blue today,” with unquestioning acceptance, and lifted their own binoculars skyward to see that beautiful bird up close.

I asked this young man how he was able to identify the eagle at such a distance. He taught me about the soaring silhouettes of eagles compared with those of other birds such as falcons and vultures, and about the flight behavior of golden eagles compared with bald eagles, which are more abundant here. He taught me that bald eagles, when they make a wind adjustment flap (those brief one or two wing flaps that seem to be brief course corrections while soaring), end those flaps with upward movements, resulting in a dihedral “V” wing pattern. Golden eagles, in contrast, end their wind-adjustment flaps downward, resulting in a nearly horizontal wing pattern.

Discriminating thought can work magic, like this man’s correct identification of a golden eagle at a great distance. But however remarkable thinking can be, it also obscures and distances. When we name a bird, we send it a million miles away. How do we truly see the bird? Zen wants us to see it, each other, and the whole world before discrimination sets in. How can we meet that distant bird face to face?

Benjamin Mui Pumphrey is a psychiatrist and Zen teacher in Augusta County, Virginia.