“Coming back to the issue of diversity,” say dharma teachers Gina Sharpe and Larry Yang, “is no different from bringing one’s awareness back to the breath or any object of aware­ness; it is a practice, and sometimes a long and difficult one.” 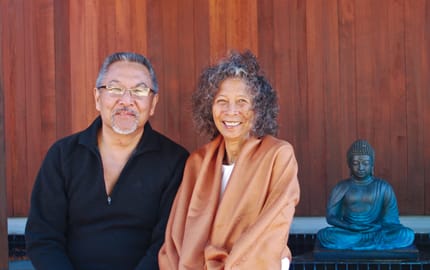 On September 19, Spirit Rock Meditation Center held a graduation ceremony for ninety-five leadership train­ees in its fourth Community Dharma Leaders (CDL) training program. This graduating class was the most diverse and multicultural group of teachers Spirit Rock has ever trained in the fifteen years of the program’s existence. The group included thirty-three people of color and twenty-nine people from lesbian, gay, bisexual, transgender, and queer (LGBTQ) communities. Never before in the history of West­ern Buddhism has such a large group of people of color or LGBTQs graduated as dharma leaders at one time.

These numbers are in stark contrast to the experience we had when we were trainees in the CDL program years ear­lier. Gina was one of two people of color in her graduating group in 1999, and Larry was one of six graduates of color in his 2003 group. Then, the idea of having a culturally diverse demographic for CDL programs seemed nearly impossible. Moreover, cultivating dharma leadership in LGBTQ commu­nities was unheard of, and no statistics on the cultural makeup of such programs were even kept. So what changed?

The answer is not so much what changed to allow this to happen as what efforts were made to bring this change about—efforts by individuals and groups to repeatedly return to the importance of multicultural awareness. This coming back to the issue of diversity is no different from bringing one’s awareness back to the breath or any object of aware­ness; it is a practice, and sometimes a long and difficult one. In many cases, this returning, over and over, occurred despite the resistance, indifference, and ignorance of mainstream dharma communities.

In order to create a program with such cultural diversity, we—the two of us plus Eugene Cash and Thanissara as the coordinating team of teachers—not only had to create an inclusive invitation but also had to shift the way in which the invitation was made. In the past, Vipassana teachers nominated candidates for the program; the candidates then applied and were either rejected or accepted by the coordinat­ing teacher or team. This needed to change.

Two years before the start of the program, we began out­reach to communities in which people weren’t then think­ing about the possibility of becoming dharma leaders—not because they weren’t qualified but because they were largely invisible to the mainstream practice community. Through extended conversations, we developed relationships with many fully qualified candidates of color and LGBTQs and spoke with them about how the program might fit into their lives and practice. We also explored what might inspire prac­titioners in diverse communities to consider a path of dharma leadership, realizing that the motivating factors might be dif­ferent for people outside the mainstream. We engaged with the larger Vipassana teaching community and potential candidates to foster this aspiration as best we could.

These were necessary steps to be able to include those who have been marginalized by racism, discrimination, invisibility, and indifference and who have felt a lack of trust toward mainstream communities, including dharma communities, as a result. It was through this relational process that candidates of color and LGBTQs began to be nominated and apply in record numbers.

It’s easier to create an inclusive com­munity from the ground up than to try to retrofit one that isn’t inclusive.

The Community Dharma Leaders training program offers two years of rigorous study and deep reflection on traditional Buddhist teachings and texts as well as “nuts and bolts” explo­rations of how to teach dharma and how to build dharma organizations and communities. As teachers, we were com­mitted to shaping a program that included comprehensive training in competencies needed to lead sitting groups and daylong retreats and to teach beginning meditation and dharma classes in local communities. We hoped that these new dharma leaders would subsequently develop community-based sanghas and dharma organizations that reflected the multiplicities of race, gender, sexual ori­entation, and cultural difference that are an inherent part of today’s society.

It’s easier to create an inclusive com­munity from the ground up than to try to retrofit one that isn’t inclusive. Know­ing this, we emphasized the importance of addressing issues of multiculturalism and diversity in the initial stages of cre­ating a meditation community. During the CDL program, this required a deep investigation into both individual and collective cultural conditioning and unconsciousness, as well as experiential training in deconditioning. We applied the Buddha’s teachings on internal and external mindfulness in the Satipatthana Sutta as a way of expanding spiritual practice from a personal to a collective experience. We looked into group dynamics to understand them deeply; deconstructed the nature of harmony and disharmony; explored the experi­ences of power, patriarchy, and privilege; and wove cultural perspectives into the entire program.

The process through which the group of ninety-five candidates, four coordinat­ing teachers, and nineteen guest teach­ers journeyed together over the course of two years was profound, difficult, and ultimately inspiring. The program was a remarkable cumulative experi­ence, revealing the dynamics of identity and power and the complexity of being a dharma leader within the diversity of modern-day communities. For the par­ticipants, it was also a precious oppor­tunity to be together, work together, and practice together in a diverse and multi­cultural learning environment.

Our aspiration, and the aspiration of CDL, is for the dharma to be suffused in all communities, in all cultures, in all directions. May many beings benefit from the effects of the CDL program. May many communities benefit and deepen their experience with the dharma through the efforts of these CDL gradu­ates. May these efforts continue for the liberation of all beings.

Larry Yang teaches meditation retreats nationally and is committed to creating access to the dharma for diverse multicultural communities. He is a Spirit Rock teacher and is a core teacher at the East Bay Meditation Center (Oakland) and Insight Community of the Desert (Palm Springs). His book Awakening Together is available at Wisdom Publications.