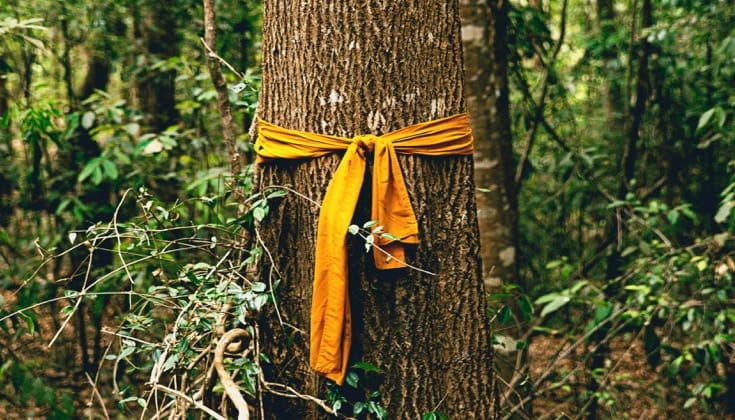 An ordained tree in Thailand. Photo by Peter Hershey.

Whatever your political perspective, now is the season to stand up for what matters. To stand against hate. To stand for respect. To stand for protection of the vulnerable. To care for the natural world.

Do not believe that meditation and contemplation are the fulfillment of the Buddhist Path. Inner peace, freedom and joy develop only when paired with the outer teachings of virtue, respect and mutual care. The foundation of Dharma is relational, built on generosity, virtue and loving-kindness. The Path to human happiness and liberation requires Right Intention, intentions that are free from greed, hatred and cruelty; Right Speech, speech that is true and helpful, not harsh, not vain, slanderous nor abusive; and Right Action, actions that are free from causing harm, killing, stealing and sexual exploitation.

In his life, the Buddha intervened to try to stop wars. He counseled kings and ministers, and guided those around him with teachings of peace and respect. In modern times, Maha Ghosananda of Cambodia joined the United Nations peace process and led years of peace walks of loving-kindness through the war zones and killing fields of Cambodia. Thai abbots have taken their robes and ordained the oldest trees as elders of the forest to protect whole ecosystems from logging. Burmese monks and nuns marched in the streets to protect citizens from the harsh military dictatorship. A.T. Ariyaratne in Sri Lanka enlisted hundreds of thousands in a 500-year peace plan. Vietnamese, Chinese and Tibetan monastics have stood up for peace, justice and compassion, even immolating themselves to stop the harmful actions around them.

Gandhi explains, “Those who say spirituality has nothing to do with politics do not know what spirituality really means.”

This is not about red or blue. It is about standing up for the most basic of human principles, for moral action and the prevention of harm. It is embodying Dharma amidst the troubles of the world.

You are not alone. You have generations of ancestors at your back. You have the blessing of interdependence and community. You have the great trees of the forest as steadfast allies. You have the turning of the seasons and the renewal of life as your music. You have the vast sky of emptiness to hold all things graciously.

With peacefulness and mutual respect, our Buddhist communities can become centers of protection and vision.

You have been training for this for a long time. With practice you have learned to quiet the mind and open the heart. You have learned emptiness and interdependence. Now it is time to step forward, bringing your equanimity and courage, wisdom and compassion to the world. The Bodhisattva shows the way to alleviate suffering amidst it all.

As Zen master Thich Nhat Hanh explains, “When the crowded Vietnamese refugee boats met with storms or pirates, if everyone panicked all would be lost. But if even one person on the boat remained calm and centered, it was enough. It showed the way for everyone to survive.”

Since the election, storms of uncertainty and fear have arisen. It is time to collectively stand up, calm and clear. With peacefulness and mutual respect, our Buddhist communities can become centers of protection and vision.

Vision means carrying the lamp of the Dharma. It means standing up for the truth—no matter what:

“Hatred never ceases by hatred, but by love alone is healed.”
“Greed, Hate and Ignorance create suffering. Generosity, Love and Wisdom bring happiness.”
“Mind is the forerunner. Speak and act with a pure mind and happiness will follow.”
“Plant seeds of goodness, and well-being will grow.”

Now a time of change has come.

We must listen deeply, bear witness, honor everyone, and choose our actions wisely and courageously.

Do not worry if the Right Action is not yet clear to you.

Wait in the unknowing with mindfulness and a clear heart.

Soon the right time will come and you will know to stand up.

I will meet you there.

This piece was originally published on SpiritRock.org.