An exclusive interview with His Holiness the Seventeenth Karmapa by Melvin McLeod. 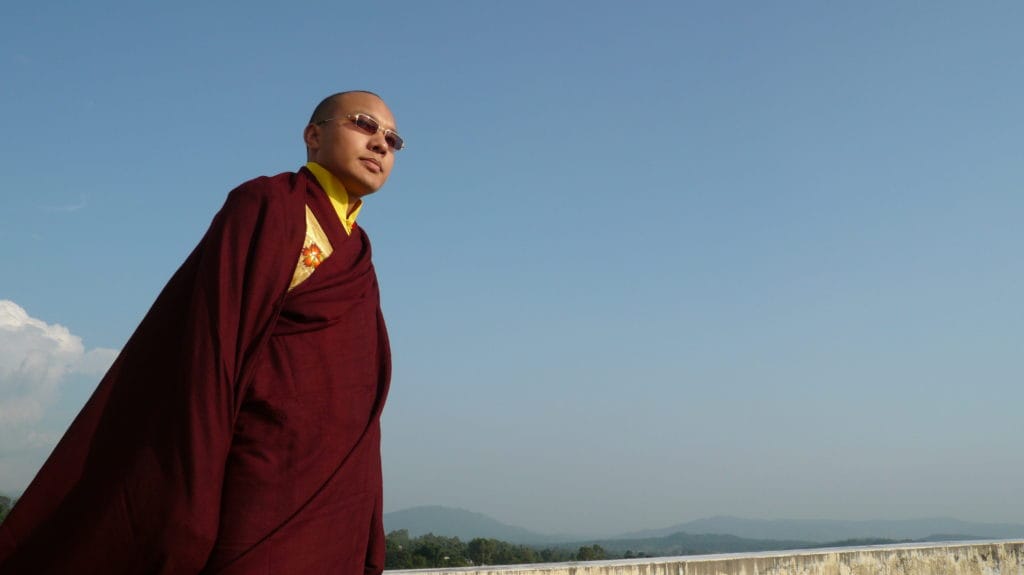 In anticipation of his historic first visit to the West, I had the honor of traveling to India to interview His Holiness the Seventeenth Karmapa. I met him at his hotel in New Delhi, as he was en route to his home in McLeod Ganj. Since I had received instructions and transmissions from his predecessor, the Sixteenth Karmapa, in my early days as a Buddhist practitioner, this interview had great meaning for me personally. I found the Seventeenth Karmapa to be a young man of extraordinary self-possession. Striking physically, he was direct but self-contained, and his smile had a touch of wryness. Our interview was conducted through an interpreter, and though His Holiness did not speak any English during the half hour or so we were together, he followed carefully and seemed to comprehend my questions as I asked them. This interview affords us a rare insight into the style, priorities, and aspirations of this young teacher and lineage holder who is now beginning what I’m sure will be a long and important role in Buddhism in the West.

Melvin McLeod: Could you tell us about the Buddhist training that you are receiving?

His Holiness the Seventeenth Karmapa: Since I was young, I have had the opportunity to study and practice dharma. I have been fortunate to receive dharma teachings from many qualified masters. As a result, I can say that I now possess some small understanding of the dharma and its many facets. What is most important is to use one’s study of dharma texts to bring oneself closer to the dharma itself. This is something that each person must do for themselves, and it is what I am concentrating on, what I am putting my main effort into. First, you feel that there is some gap between yourself and the dharma. Then you strive to make that gap smaller, to bring yourself nearer and nearer to dharma.

What do you feel you have to do to fulfill your role as the present Gyalwang Karmapa? Is it to achieve this unity between yourself and the dharma that you are talking about?

In the past, I made the effort through dharma practice to bring together the one known as Karmapa Ogyen Trinley Dorje and the one called Apo Gaga, my given name as a child. When I was younger, I was not able to unify them perfectly. Now, however, I believe that for the most part, Karmapa and I are one. At least, what is connected with Apogaga has lost its strength, while Karmapa’s enlightened activity has grown stronger. So now, whatever I think and do, for the most part it is from the perspective of Karmapa and fulfilling his purpose.

However, when you ask, “What is it precisely that the Karmapa must actually achieve?” that is a difficult question to answer immediately. The reason is that the Karmapa has made aspiration prayers to bring comfort and happiness to all sentient beings, and how a Karmapa actually does that is difficult to describe in any concise or limited way. What I can say is that I try to refrain from thinking of my own benefit, and instead, I try in whatever way possible to bring comfort, happiness, and good qualities to others.

Do you feel that as a teacher you will focus on the traditional teachings and practices of your lineage, or will you try to play a wider role by promoting values such as peace and compassion to a more general audience?

In the twenty-first century, if a dharma practitioner only thinks about things from a Buddhist perspective, it is a sign that one has not analyzed the situation well. That is not very beneficial. It is very important that dharma be harmonious with the larger society in which one lives, that it be humanitarian. Therefore, I do not rigidly confine my own dharma practice to the rules dictated by any one particular tradition. Instead, I practice whatever from different traditions is clearly beneficial. I believe that others should practice in this way as well. I do not have the personality to be able to practice dharma only according to one tradition’s rules and regulations.

What, then, is the message you will bring to the wider audience?

In general, we human beings work in different ways. We have different religious and philosophical traditions, and we put them into practice in different ways. So there may be one particular set of rules that a certain group of people follows, and we must accord them respect. However, looking at it from the perspective of there being many different kinds of people with many different backgrounds, we can see that it would be very difficult to make everyone follow one single set of rules.

Therefore, I believe that we must respect the traditional approaches, but at the same time we can look at each person individually and see what practice would be best for them. We have a wide range of practices to select from, so it is certainly possible to find the way of practicing that best suits a particular individual and is in harmony with their own goals, situation, and culture.

That is the best way to go. Different people are like different pieces in a jigsaw puzzle. People are made differently, appear differently, and think differently. We have to find what fits each individual; we cannot just force each person into one general style or way of doing things.

As well as your traditional Buddhist training, are you also studying modern secular topics, such as world history, geography, languages, science?

I’ve noticed that you often speak directly to young people, people of your own generation. Do you feel a special mission to address their spiritual needs?

I have not really thought along those lines before, of saying something exclusively to young people. Nevertheless, one could observe that youth is a major period of development. It is the time when people grow, both physically and mentally. Some of that development might go in a positive direction and some in a negative direction, but whatever development it is, it is difficult to put a stop to it. At the same time that people grow, however, they also take on responsibility. People may think and act in different ways, but if we can all take responsibility for things, that is very good.

In addition to the broad spiritual and social issues that you intend to address, will you also be performing your traditional role of transmitting the teachings of the Kagyu lineage to committed Vajrayana practitioners?

This is something that proceeds from the lineage. When we have a lineage for these teachings, things go very well. Therefore, I am endeavoring to do this in the context of our lineage of these teachings.

Your Holiness, thank you very much.

We would like to thank Ari Goldfield for his help in retranslating and editing this interview.