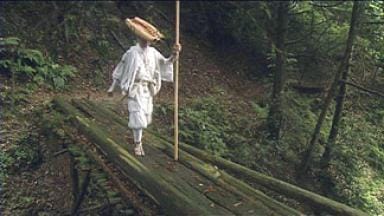 Earlier this summer, National Public Radio did a story about Enryaku-ji temple’s Endo Mitsunaga, the “thirteenth monk since World War II to complete the Sennichi Kaihogyo, 1,000 days of walking meditation and prayer over a seven-year period around [Japan’s] Mount Hiei.”

Though it was a very fine write-up with that special NPR touch, there was nonetheless one rather large problem with the story: Mitsunaga was incorrectly identified as a “Zen monk.” He is, in fact, a Tendai Buddhist. (NPR did eventually put a correction online; the audio version, however, has not been altered.)

This mistake would seem to illustrate the pervasiveness of the assumption that all Japanese Buddhism is Zen Buddhism. I thought this incident might give us all a good opportunity to grow in our knowledge of Japanese Buddhism–or at least the Tendai tradition. So I reached out to Dr. Stephen G. Covell, associate professor in the Department of Comparative Religion and director of the Soga Japan Center at Western Michigan University, for help.

Dr. Covell is also the director of WMU’s Japanese Religion and Culture study abroad program, and the author of Japanese Temple Buddhism: Worldliness in a Religion of Renunciation.

NPR’s recent confusion of the Zen and Tendai traditions seems an indication that the average American is most familiar with Zen in terms of the Buddhist traditions of Japan. Would you please talk about where Tendai fits in the larger context of Japanese Buddhism?

I do not think it is an overstatement to say that in many ways Tendai is the source of many of the Buddhist traditions in Japan today. From Tendai sprang Soto and Rinzai Zen, the Pure Land (Jodo shu) and True Pure Land (Jodo Shinshu) schools, and the Nichiren school. Several new lay Buddhist movements today, including Rissho Koseikai and Kodo Kyodan, consider themselves within the Tendai tradition as well. Tendai is also the primary source of original enlightenment thought, which is so central to much of Japanese Buddhist thought across denominations. Today, the Tendai denomination is one of the smaller denominations, but it is still regarded as of central cultural importance.

Would you say something about the character of Tendai? What are the important teachings, texts, and practices?

Tendai is known for its wide variety of practices. Its central text is the Lotus Sutra, which is understood to teach that all possess Buddha Nature and thus have the potential for enlightenment. Tendai also teaches that the Lotus is about the ideal of the One Buddha Vehicle, which usually is understood today to mean that all the many paths to salvation taught by the Buddha (or others) can be seen as useful expedients to salvation (as opposed to the views allegedly held by some schools that certain paths will never lead one to salvation).

The practices of Tendai are many and include sitting meditation, sutra recitation, and the various rituals of esoteric Buddhism—including (most famously) the goma fire ceremony, nenbutsu, and others.

What can you tell us about Enryaku-ji, the temple mentioned in NPR’s story?

Enryaku-ji is the headquarters temple complex of Tendai. It sits atop Mt. Hiei outside of Kyoto. It is not a single temple but refers to the numerous temples spread over the three main areas of Mt. Hiei. The main hall is called Konponchudo. The head priest of Enryaku-ji is the head priest (zasu) of the entire Tendai denomination. I am currently finishing a book on Yamada Etai who was head priest for 20 years beginning in 1975. For more on Enryaku-ji and modern Tendai, I suggest keeping your eyes out for the book—which will hopefully be available in 2011. Paul Groner’s work Ryogen and Mount Hiei: Japanese Tendai in the Tenth Century also gives a detailed history of Enryaku-ji centuries ago.

Would you please help us understand the practices of the so-called “marathon monks,” like the one profiled by NPR?

First off, the “marathon monks” hate the term “marathon monk.” What they are practicing is a walking meditation not an athletic competition. Its proper name is the kaihogyo, which literally translates as “mountain peak circumambulation practice.” (Clearly marathon monk is a catchier phrase). This practice is one of the many practices on Mt. Hiei. It is a seven-year ascetic practice done as part of the traditional twelve-year secluded practice of Mt. Hiei (the first 100-day segment can also be done as part of the three-year retreat of Mt. Hiei). It consists of ten 100-day segments done over seven years. The length of the segments varies but is usually roughly 30 kilometers. The practitioner walks the distance stopping to pray at hundreds of sites along the way. It represents a combination of Lotus and esoteric practices. It became widely known in three decades ago after Tendai officials let NHK (Japan’s PBS) film the 9-day fasting and prayer that takes place after 700 days have been completed. Only a very small number of people are given permission to do the full 1,000-day practice.

In terms of books or other resources, what recommendations do you have for readers wanting to know more or better educate themselves about Tendai or Buddhism in Japan generally?

Paul Groner’s Ryogen book and his Saicho: The Establishment of the Japanese Tendai School are excellent histories of early Japanese Tendai. For contemporary Japanese Tendai, I would recommend my own book, Japanese Temple Buddhism: Worldliness in a Religion of Renunciation, which, though not limited to Tendai, has extensive information on it. For an outstanding introduction to original enlightenment thought I would highly recommend Jacqueline Stone’s Original Enlightenment and the Transformation of Medieval Japanese Buddhism. A search of the website for the Japanese Journal of Religious Studies will provide anyone interested with several downloadable articles on Tendai, the kaihogyo, and related topics.